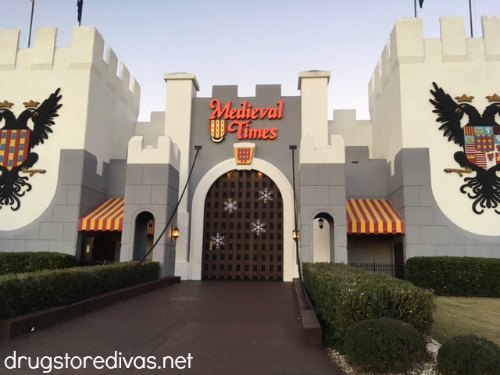 I wasn’t sure if I could do it, honestly. Eat an entire meal with my hands. It just seemed a bit impossible when I thought about it. Soup, chicken, sides, dessert … one napkin. But that’s really what everyone knows about Medieval Times and all I could think about when Pete and I were planning to go earlier this month.

We entered the castle, picked up our VIP Royalty tickets — which meant we got priority seating, a flag to wave, a rally towel, but still no utensils — and sat in the front row. Our host for the night quickly came over to serve us tomato soup in a bowl with a large handle. You could pick it up and sip easily. Utensils really weren’t needed.

Once we got that out of the way, we were really able to enjoy the show. We sat front row center in the yellow knight’s section. He was our main dude, and we were cheering mainly for him, but also for the other two knights on our half of the arena. And cheer we did. There were feats of strength, which were incredible impressive. Six knights were riding on horseback, grabbing rings with poles. It was so cool to watch them and think about how they were actually competing in these games. There wasn’t CGI or stunt doubles around. Sometimes the men would falter, but mostly they would succeed, and that was so much fun to watch.

After that, there’s a full “scripted” portion of the show where the knights joust and fight so one can (eventually) save the princess.

I actually loved it so much that I want to go back again and bring my parents. I know they would love it. Maybe not the eating with your hands part, but they would definitely love the show.

Have you been to Medieval Times?