We attended an advanced screening of King Arthur: Legend Of The Sword. This is our King Arthur movie review (although it was not required of us and our attending had nothing to do with this blog). 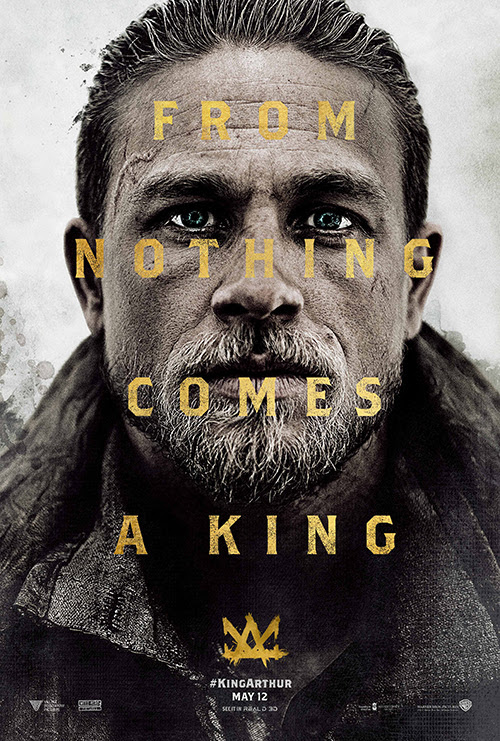 Arthur will become King of England. That’s obvious. The actual conclusion is in the title of the movie (King Arthur: Legend of the Sword). You’re not going to see this movie to figure that out. But the way he gets there, the myth of King Arthur and how it plays out, that’s why you’re heading to the theater.

The movie opens with a battle between current king Uther Pendragon (Eric Bana) taking on Mordred and his legion of really large elephants. Like, really large. These mythical beasts only exist in movies and legends. And you have to dispel disbelief if you’re to love this movie as much as you should. This is called “Legend of the Sword” not “accurate retelling of a royal succession.”

There are Sirens who live underwater with arms and multiple tentacles, there are mages who can control animals with their minds, and there is a sword is a stone waiting for its rightful heir to pull it out and save his people.

That heir is Arthur (Charlie Hunnam) whose father sent him down the river in a boat, a la Moses style, to save his life. Arthur ended up in a brothel where he grew up hustling, learning to fight, and forming a loyal group of friends and … I won’t say enemies because Arthur says (I’m paraphrasing), “Why have enemies when you can have friends?” … but a loyal group of people who just let him cut a line when he pushes through or lay his hands on a guard because it’s Arthur.

Arthur, the funny, quick witted protector of the common man. A sort of Robin Hood who takes from the offender to give to the offended. He takes a year’s wages from the Vikings for assaulting a prostitute, then gives it to her. He protects his friends and fights their battles when they cannot. You know, the exact type of person who you’d want running your country.

But, he’s not one who wants that power. Isn’t that always how it is? The people who would make the best bosses would rather stay a worker bee. Even when he pulls the sword from the stone, revealing he is bequeath to the thrown, he is ready to just disappear, go back to the brothel, and live his normal life.

Half his friends were killed; the other half are in hiding. His home was destroyed and his money stolen. The prostitute who he took wages for was killed before his eyes. So, reluctantly — very, very reluctantly — he realizes something must be done, and he is the leader to do it.

So basically, yes, this is the story of King Arthur. But told in a way that this version of the story of King Arthur wasn’t meant to be told. Director Guy Ritchie intended it to be a serious take on the tale. But the release got shelved for a little while. And, as the legend of this movie goes, it was tweaked to add a bit of humor and Guy Ritchie-style into it. And that’s when it finally got a release date.

Thank goodness for that too.

There were moments when the entire theater laughed — and laughed a lot. There’s a recount of a story told by Arthur and his two best pals (Neil Maskell’s Back Lack and Kingsley Ben-Adir’s Wetstick) that has a very Snatch feel to it that had everyone laughing. It’s then that there’s a lot of modern mixed in with renaissance. The juxtaposition makes the movie stand on its own because it does both very well.

And Hunnam does Arthur very well. You just like him and root for you. You know the story and that he is going to pull the sword from the stone. But you genuinely hold your breath and root for him when he grasps it because you know it’s coming out and that he is going to do something incredible. He puts the common folk of England on his shoulders to overturn the current King (Jude Law as Vortigern).

Hunnam doesn’t have to put the movie on his back, though. He’s so great, but Law is so good as the evil king. And Astrid Bergès-Frisbey’s The Mage is intoxicating. Pepper in the other supporting cast members and you have this really great movie. Seriously. I knew I was going to like it, but I liked it more than I expected. Pete loved it too. And the man walking out behind us said, “This movie is going to make a lot of money.”

I think your prediction is right, dear stranger. This movie is going to make a lot of money. And it’s worth every penny.

King Arthur: Legend of the Sword hits theaters May 12. Until then, you can watch the final trailer below.