This Liberty Science Center: Extreme LSC Review is not sponsored. 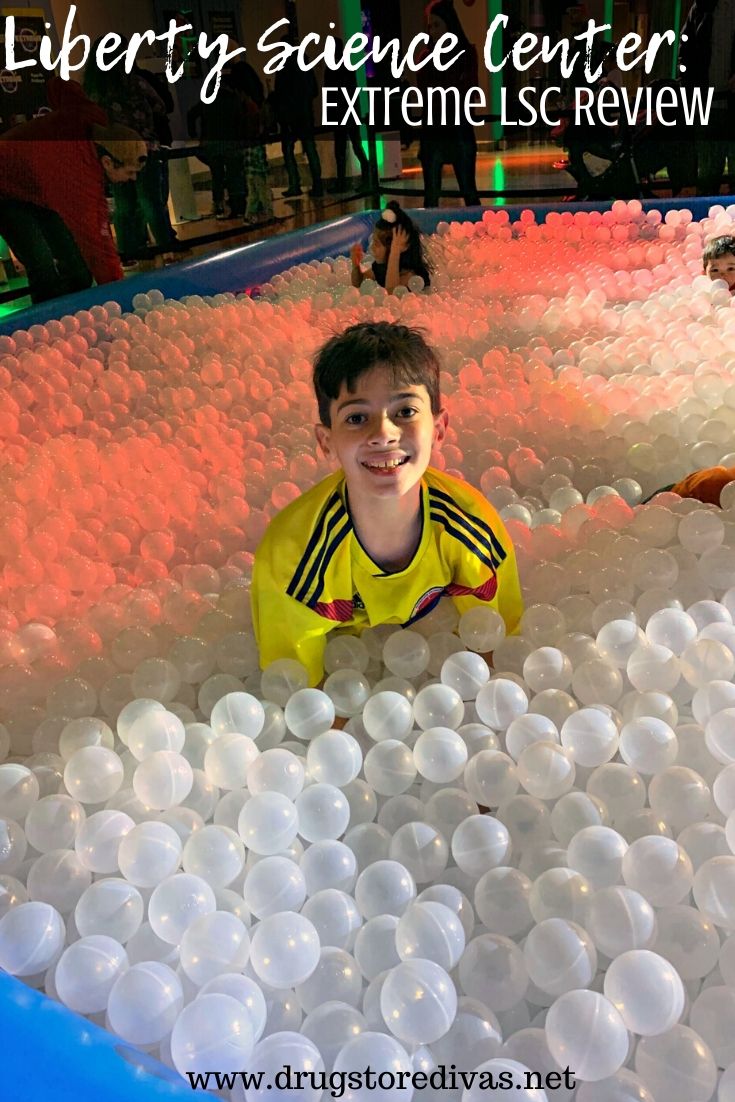 If you’re from the tristate area, you’ve heard of Liberty Science Center: an interactive science museum and learning center at Liberty State Park (222 Jersey City Boulevard; Jersey City, NJ). It’s open during the day for kids of all ages, but on the fourth Friday of every month, it transforms into Extreme LSC. November was the inaugural Extreme LSC and it was a huge success.

The event runs from 6pm to 10pm and is $20 for kids and $25 for adults. There’s an Angry Bird Universe exhibit, which is an additional cost. My friend Michelle went to the first Extreme LSC (on November 22) with her fiancé, 10-year-old, and 2-year-old. (Her three-month-old was also with them, but he was too young for the fun.)

Her kids had such a blast. And she was so amazing, she took photos of the event for us and wrote this Exteme LSC review for us. If you’re thinking about taking your family, definitely read on.

We anxiously pulled in and I noticed parking was free, which is a good $7 saving right there. As soon as you enter Liberty Science Center, security is set up like an airport. You empty your pockets and security searches your bags, then adults walk through a scanner. The children do not walk through the scanner, they go in between.

As soon as you pass security, there is a big blow up alien tent, but the line was too long for us to check it out. So instead, we headed to the ticket counter to show the tickets on my phone. We were handed wristbands, then had to show another staff member our wristbands to enter. We did arrive later then 6pm, so perhaps at 6pm there was someone directing you where to go or with a map but at 7:30pm, when we arrived, there was no one.

After we briefly looked around, we jumped in the elevator to head to the second floor. My very excited 10- and 2-year-olds were not interested in wandering. They wanted the fun right away.

We heard music, so we followed the sounds as soon as we got off the elevator. The music led us to the lobby outside of the cafeteria. The cafe is open to serve snacks and food, plus anyone over 21 can get beer and wine. My fiancé went to get some food, but he wasn’t crazy about it. 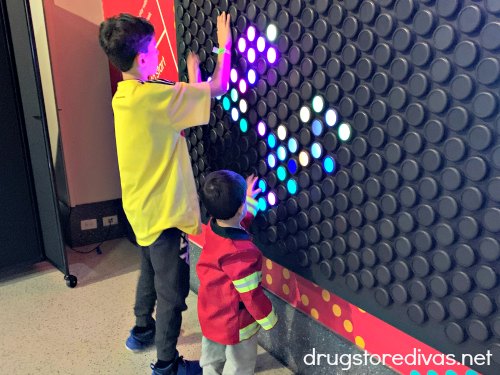 While he was eating, the boys and I noticed a large blow up pool full of clear plastic balls, a DJ, and dance floor. My boys waited briefly on line to jump into the ball pit. A staff member did tell the kids no diving or tossing the balls, but these are children and every single one of them dove into the ball pit and tossed the balls around. Children are really adorable because this ball pit created so much joy in all of them. I loved that the staff doesn’t allow the ball pit to get too crowded and kids are only allowed in for five minutes at a time. After your turn, you can get back on line as many times as you wanted.

But, after our turn, we headed off to the dance floor. My boys loved the music and started dancing right away.

Opposite the cafeteria, there is a room to explore. This is actually a great perk. All of LSC’s exhibitions are open during Extreme LSC. In this particular exhibit, there were air pressurized tubes on the wall that you can shove soft balls into and watch the balls fly through the tubes. There is a water wall with paint brushes that my boys enjoyed. A sandbox was set up with rice instead of sand, which I appreciated because it was easier to get the rice out of their clothes than sand.

The center attraction was a wire set up where the children were throwing balls up and watching them roll down into a pit. We easily spent a half hour in this section alone, and could have stayed longer, but we headed back to the elevator for the next floor to find the next activity. Because we arrived later, I wanted to make sure we hit all the activities before Extreme LSC closed.

Side note: The stairs were available but we had a baby stroller, so we used the elevators.

The next floor opened up to a bee exhibit, which was pretty cool. There was an enclosure with hundreds of live bees inside. 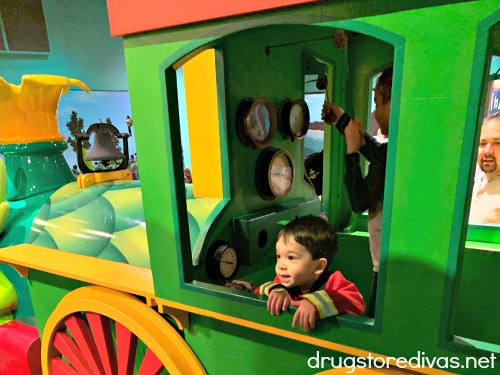 Down the hallway we found Dinosaur Train: The Traveling Exhibit, and, for any PBS loving child, like my sons, this was exciting! My children love trains and dinosaurs so their faces lit up when seeing a mini train they could walk right onto — and they could ring the bell too! My toddler was too little to ring the bell without assistance, but he loved sitting on the train seats and reading the dinosaur train books. There was a reading nook and digging area too.

On this floor, we went over to check out the slime attraction! The line was too long so we didn’t wait, but we watched other people create slime and then take home a small container of their slime.

We skipped the slime and went to the Touch Tunnel instead. The Touch Tunnel is something you crawl through, navigating in complete darkness through a maze (either on your knees or walking). The instructions say to keep one hand on the wall and feel your way out. My 10-year-old went right in. The coolest part is there a giant screen set up so you can see people going through the tunnels. There are cameras set up inside the tunnels that take your picture, then you can email yourself a copy of the picture (which we did). 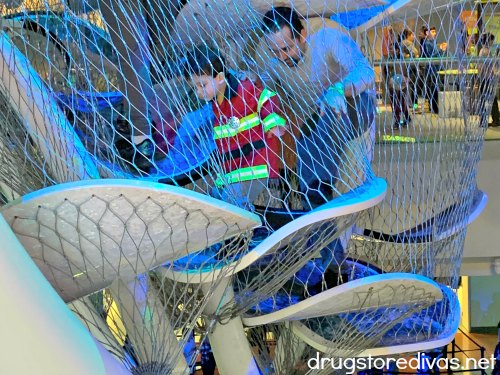 Next my 10-year-old excitedly ran to the Infinity Climber, an adventure course suspended in the air. It’s actually the first suspended climbing play space of its kind. Well, he climbed through the course in a few minutes — but it was enough to cause me palpitations. Some parts are 35-feet above the floor! He said it was cool seeing the whole place from up in the air.

The top floor is where the Angry Bird Universe exhibit was, so we got back in the elevator to check it out. My favorite section of the night was on this floor. There were telescopes set up out on the balcony overlooking the NYC skyline where you could check out the stars. It was really cold, but the views are beautiful — and worth freezing a little. The staff member working this area joked about a broken telescope that is set up to see the back of the Statue of Liberty. With all the craziness of the exhibits, this section was nice and relaxing.

But we quickly moved on to the Angry Bird exhibit! 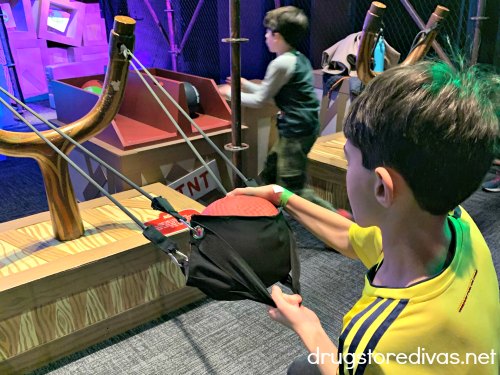 The staff member scanned the tickets on my phone and we entered Angry Bird Universe! There were little areas to watch Angry Birds, lift a 50-pound angry bird, and even play Jenga.

The main attraction in this exhibit was a slingshot. Thankfully, it was enclose for safety. My toddler was too young to participate, but my 10-year-old got right in line. He wasn’t allowed to go alone, so I went with him. The instructions were to set up soft mats, just like playing the Angry Birds game. Then he was told how to place a dodge ball into the soft catapult and release it to try and knock over the soft mats you had set up. You are on a time crunch, so picture the game and set it up quickly! You get four balls (for four chances) and then you exit.

We hit up the ball pit one last time before it was time to go. Next time we attend LSC Extreme, I’ll make sure we arrive closer to 6pm. However on a Friday night, with traffic, it might not be possible with our work schedule. 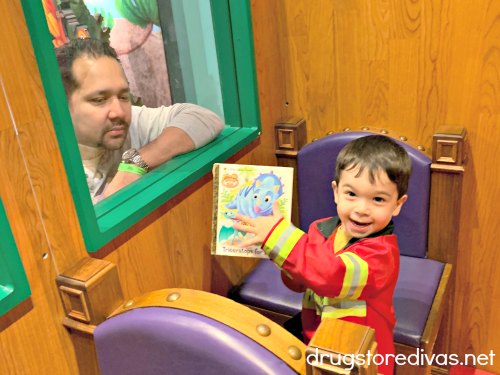 My children were happy and tired, but most of all they each had a great time. There is a big age gap between my two older sons, but this was an event they both enjoyed equally. There were. Even some girls older than my 10-year-old were having a blast in the ball pit and dancing to the music.

This family friendly event takes place again on December 27, so that sounds like. a perfect way to spend a night of winter break. For the adults who want some fun without the kids, Liberty Science Center offers LSC After Dark exclusively for adults who are 21 and older. Those events happen on the Third Thursday of the month from. 6pm to 10pm. Tickets start at $20.

If you’re planning on going, be sure to check out Groupon for discounted Liberty Science Center tickets.

This looks so fun! My little brother and sister would love it.

The Dinosaur Train looks like a lot of fun. My nephews love trains so I am sure this would be a hit with them.

That place looks awesome. I'm sure my son would love it and he would like to spend there all day

These are the best times with the kids. I always enjoy them having fun at places like this.

This looks like an amazing time! We love our local science center!