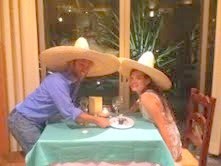 Well, why not combine the two?

Our favorite place was the Mexican joint. There was every cuisine, and we ate at all of them [[except the French because we weren’t wearing “leather shoes”]] but the Mexican was the absolute best. I guess that makes sense, huh? 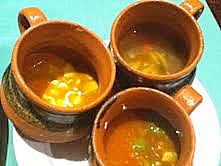 We started with a trio of soup appetizers: tortilla soup, crab meat soup, and some lime and chicken broth concoction. Pete was fond of the latter because he’s a fan of anything fresh and lime adds a brightness to every dish [[so consider adding that to pretty much anything, like the oven-baked corn we chatted about a few Tasty Thursdays ago]].

Personally, my fave was the tortilla soup, but I don’t wanna talk too much about it now because Pete has a fantastic tortilla soup that will definitely feature in an upcoming Tasty Thursday once the ingredients go on sale]]. 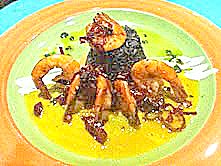 The best thing we each had was a risotto-based dish. My fave was in the Italian place, Pete’s was in the Mexican fiesta. Mine had prosciutto and peas. The prosciutto added a delicious saltiness and the peas had a bit of crunch, which was an excellent contrast to the softness of the rice. This was by far the best thing I’ve eaten in a long time. I really wanted someone to spoon feed it to me every day for the rest of my life.

Pete’s risotto had squid ink in it [[he thinks]] to give it a dark black color. The risotto was perfectly sticky and the shrimp were in an oil and herb and roasted chili pepper marinade, and then grilled. The combo of salty, spicy, oily, sticky, and smoky was to die for. He’s gonna try to reproduce that. Maybe. One day. Who knows.