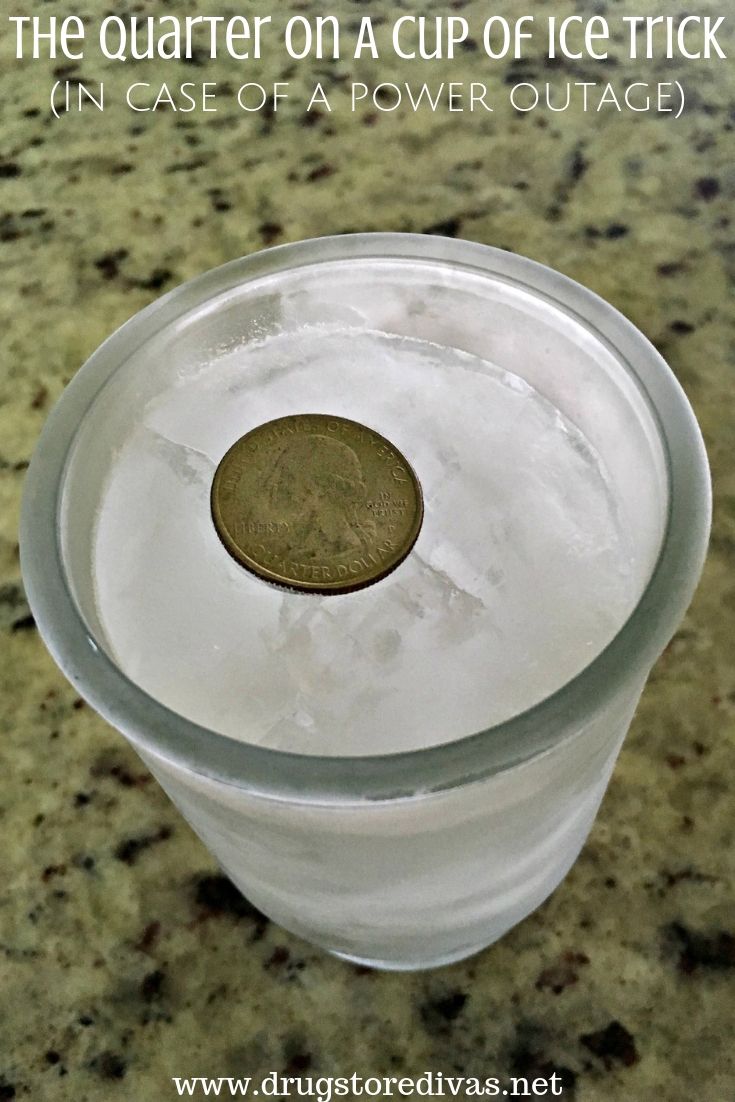 Last year, when Hurricane Florence hit us, we left. We already had plans to leave, though. My brother was getting married in New York, and no way could we miss that. So, when we were preparing to leave, we learned a few life hacks. One of them was the quarter in a cup trick.

We stayed for Hurricane Dorian, so we didn’t have to think about some of the preparations that we did last time. Like this quarter in the freezer hack.

But, it’s been on my mind a lot lately, so I wanted to blog it for you guys.

This is not absolutely scientific, but it’s pretty good for peace of mind if you’re heading out of town.

What To Do:
Fill a cup with water and stick it in the freezer until it turns into ice. Take it out, place a quarter on top, and then put it back in the freezer.

What Does The Quarter On A Cup Of Ice Do:
The concept is that when the power goes out, food in your freezer will start to thaw. And the ice in the cup will melt. If you return home and see the quarter at the bottom of the glass, you know your food has (most likely) thawed and refrozen. And that’s unsafe to eat.

Conversely, if you come home and the quarter is still on top, you know you didn’t lose power and your food is safe.

And if the quarter is somewhere in the middle, you know you lost power for a while. And it’s a gamble.

Does The Quarter On A Cup Of Ice Trick Work?
In theory, it does. But not really in practicality.

See, if you think about ice melting, it doesn’t actually just melt from the top down. It melts all around, basically equally. So you’ll be losing from the bottom as well as the top and sides. And that doesn’t accurately depict how long power was out.

Also, do you know what the time lapse of ice melting is? I don’t.

So, with this hack, you’ll know if you lost power. And if the quarter is on the bottom of the glass, you’ll know you lost it for a long time. But if it’s in the middle, it’s still uncertain.

For a little sense of what happened while you were away, try this. But for an exact decision on if you should keep or toss your frozen chicken, this isn’t gonna work.e

I've never heard of this hack before. I could see it being somewhat useful during hurricane or even winter storm season.

This is a neat sounding trick; I've never heard of it before. I think to really know, you'd have to be willing to test it in a freshly unplugged freezer and check it every hour or two to document when is happening. #alwaysascientist

im amazed how informative this is, i got a lot of ideas that i might use, thanks for sharing

I 've never heard of this trick, but I will definitely use it the next time our power goes out. I've already bookmarked this page for the future. Power outages happen all the time where I live and it'd be good to know when the food should be thrown away. Thanks for the much needed tip!

I didn't know about this trick. This is certainly an indication when the quarter is at the bottom of the glass then it means power lost for a long time but yes it's not 100% accurate in finding foods need to frozen or throw away.