This iRestore Laser Hair System 6-Month Review post is sponsored and written by Pete. All thoughts and opinions belong to Drugstore Divas.

August 2020 Update: In July, after 28 months of use, the iRestore laser hair system died. We are not sure if it’s the helmet or the battery pack that died, but the helmet will not turn on.

Drugstore Divas did reach out to iRestore with no response. We originally received the system for review, but spent hundreds of our own dollars on products for 16 months after our review period was over. It is hard for us to recommend spending over $650 on a product that dies after just over two years of use.

It has been six months since I started using the iRestore Laser Hair System. With the exception of two days I missed when traveling in May, I have used it every other day for the last six months.

I’ve been writing posts about the different products —  iRestore Hair Growth Serum and iRestore Hair Growth Shampoo — and other various topics. I have mentioned my results briefly in each post, but since it has been six months, I figured it was time for an update about how my hair is doing. 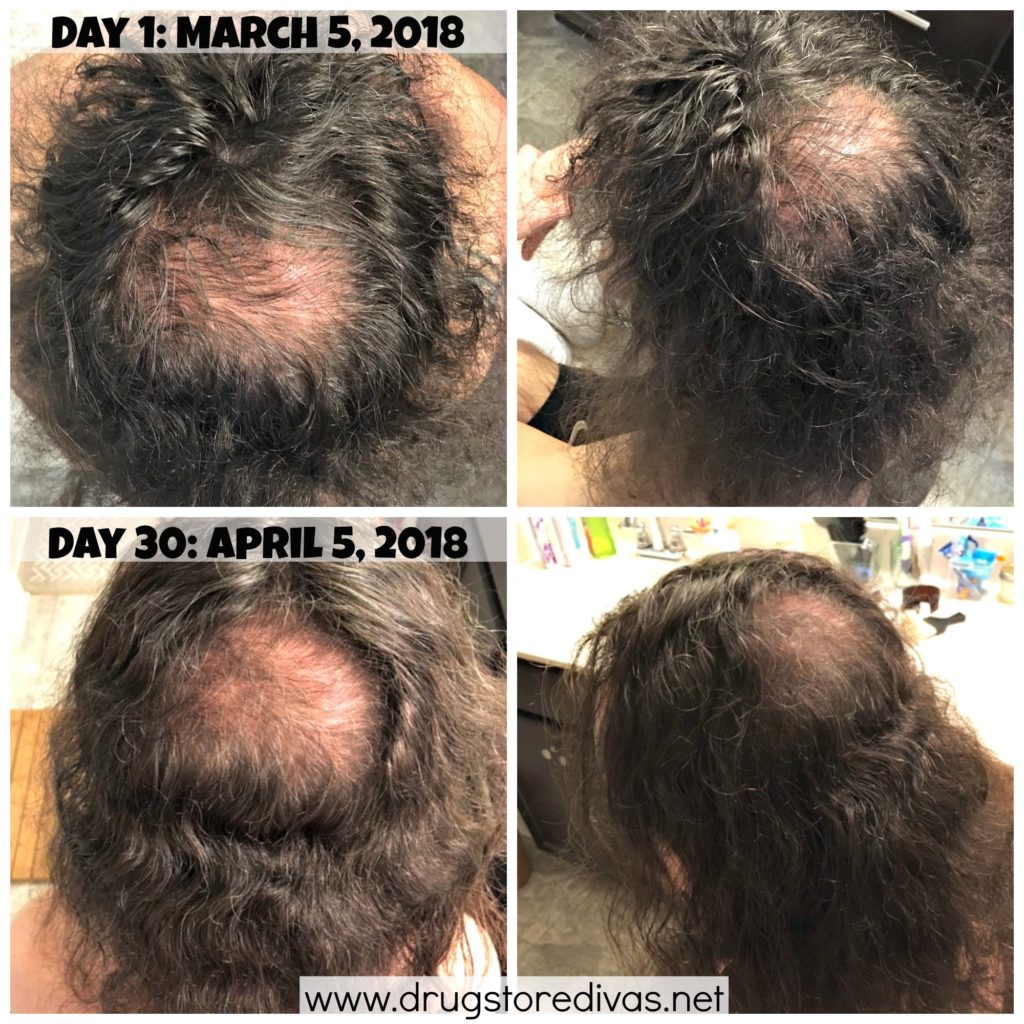 It looked like I was seeing results right away. I was so happy with how the iRestore was working. It looked like my bald spot had turned from an oval into a circle.

What was probably happening, though, was I may have experienced growth and then shedding here from the system. That’s common for some users. So, ass much as I wish I could say that it was helping right away, it takes a lot longer than four weeks to start seeing actual results. It was encouraging, though. And after years of suffering from hair loss, any encouragement was good. 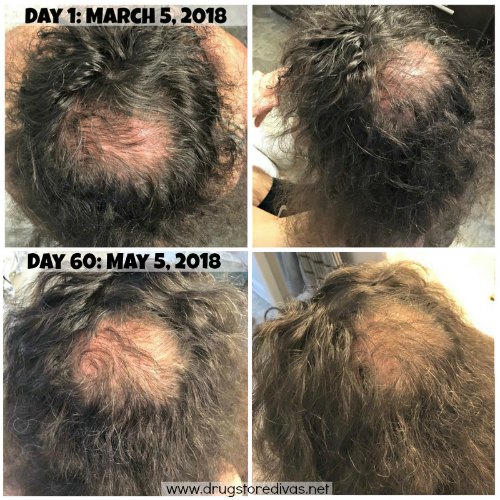 I started noticing some of my hair falling out, but what I noticed most was that my hair was really getting soft thanks to the iRestore hair growth shampoo.

In fact, my hair started feeling a lot healthier. I had always had frizzy ends on the sides of my hair (in the front). After two months of using this shampoo, that frizz actually went away. I was shocked. So my bald spot wasn’t changing, but my hair itself was getting healthier. 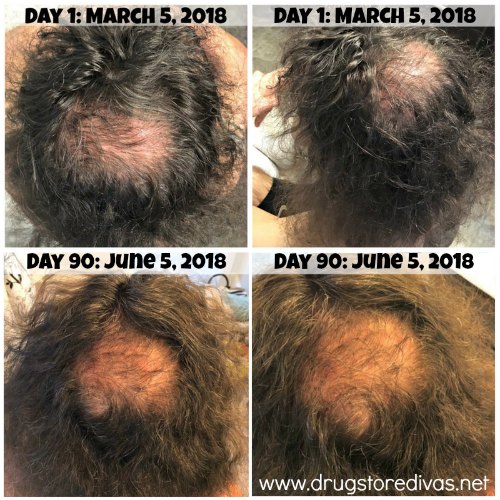 This month, I started to notice that the hair on the sides seemed to be fuller, but the bald spot was widening on the top and the bottom.

When I think about it now, it seems like not all the hairs are the same weakness. That makes sense since not all of them fall out at the same time. So it seems like it took longer for the weak hairs on the top and bottom of my bald spot to fall out. 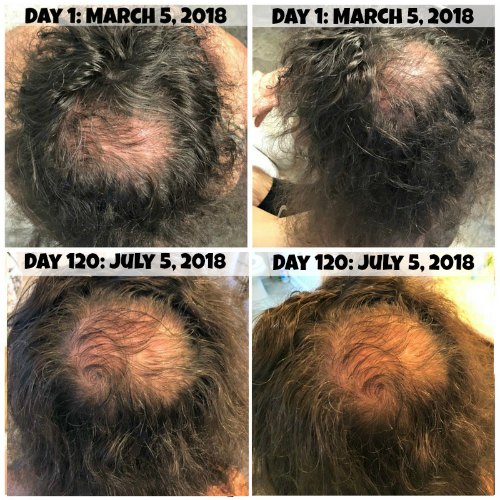 This was actually the first month that my hair loss seemed to be getting worse overall. But actually, that means it was getting better. I was getting nervous, but I spoke with the iRestore team and was told this is normal.

See, the hair loss was due to shedding, which is what I was told you should see before hair growth. Shedding is when the old, weaker hairs start to fall out. They will eventually be replaced by the stronger, new hairs. So even though this was the worst my hair had looked, it was the most confident I was in the process. Keep in mind that all hairs are in different stages of the hair growth cycle. So, that’s why I may have experienced/noticed shedding in this part of my hair. 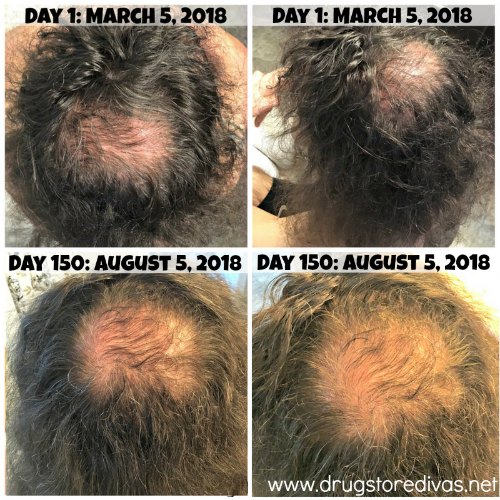 There seemed to be a lot more shedding this month. The side view of my bald spot was actually getting pretty bad.

But, if you look at the middle, it actually seemed like new and darker hair was growing there. So it felt like the shedding was slowing down in that spot. And after shedding, baby hairs are supposed to start to form. But they may be too tiny to see, so that is what I attributed this to. 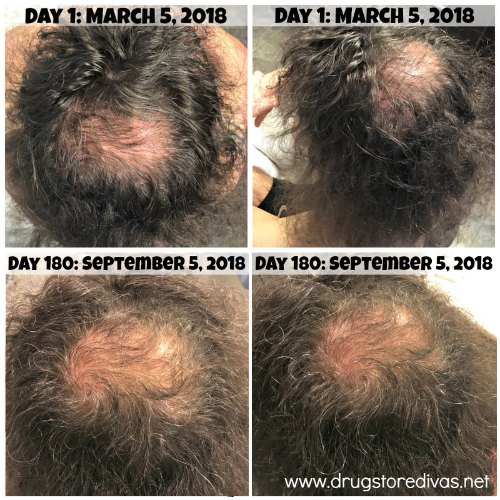 This is the end of the return policy time of iRestore, so I tried to look at this month as a traditional consumer instead of someone who was reviewing this system.

Personally, I wouldn’t return this. I have faith in the science of the system (if you remember my first post, I told you that I had read about this in Popular Science magazine before we were contacted by iRestore). I know that it is slow going. For someone who doesn’t know this, it could be a frustrating process. But you have to understand that hair growth doesn’t happen overnight. And it doesn’t happen in the first few months of use either.

This month, I kind of feel like I am starting to see hair growth around the edge of my bald spot. And it seems like the hair that is in the bald spot now is thicker and healthier than it has been previously. Those hairs seem to be growing longer too.

I still feel self-conscious about my bald spot though because it is still there and, overall, larger than when I started this. But, I don’t usually look back there. I just ask Lisa how my hair looks. It’s really simple to use the iRestore system, so I am going to continue it and continue posting for the next six months. I am really looking forward to the month when we can all celebrate my hair growth!

Some users have noticed great results at the six month mark, which is amazing. That gives me hope. Also, as I’ve said, I’m very confident in this process and am very hopeful that continuing will do wonders for me.

If you haven’t started with iRestore yet, now is the time to do it. We have a special code for Drugstore Divas’ followers. Use DSD150 to get $150 off your iRestore Laser System purchase HERE.

Your purchase comes with a 6-month money back guarantee for the iRestore Laser Hair System. Also, if you aren’t 100% satisfied (with the serum, shampoo, or capsules) for any reason within the first 90 days, contact Freedom Laser Therapy to get a full refund.

I don’t see any improvement. Can you show new pictures?

We documented this process through a year. You're commenting on the 6-month post, but I suggest you check out the 1-year post here: https://www.drugstoredivas.net/irestore-1-year-review/

As a 28 yr old woman who has struggled with hair loss for some time I am disappointed in myself for trusting this company's claims and return policy. I purchased this product because I felt reassured by the fact that I could return this item if it did not provide the results I desired. I bought the iRestore several months ago and at about the 3-month mark decided it just wasn't working for me. If I had AMAZING results it might have been worth the price, but I did not. So I attempted to return the item, and was flat out refused. What they do not tell you (and is buried in their return policy) is that you can only return the item after 6 months of use, and then assuming you remember that date has come up you have 30 days to return this item. This reminds me so much of those old infomercials that would automatically charge people for items after a 'free' trial. I moved across the country during my 30-day return window and completely forgot to contact them again. I remembered 2 weeks after my return window closed. When I attempted to return the item the company would NOT budge, they didn't even care that I had previously attempted to return the item. I should also note that upon further research as soon as you stop using this product any results you may have seen (assuming you see ANY at all) will be lost, look it up, you may as well use rogaine, it's cheaper and much more effective. I DO NOT RECOMMEND THIS PRODUCT. Terrible customer service, poor results, and extremely expensive. They are preying on desperate people.

With that being said, although you haven't been able to see positive results, I do encourage you to continue to use the device as sometimes it can take awhile longer for some customers to see results. Another thing to note is although the device may not grow you any new hair, it may help preserve what you currently have, as Low-Level Laser Technology (LLLT) is not only meant for hair growth but also for hair preservation.

Thanks for your time.