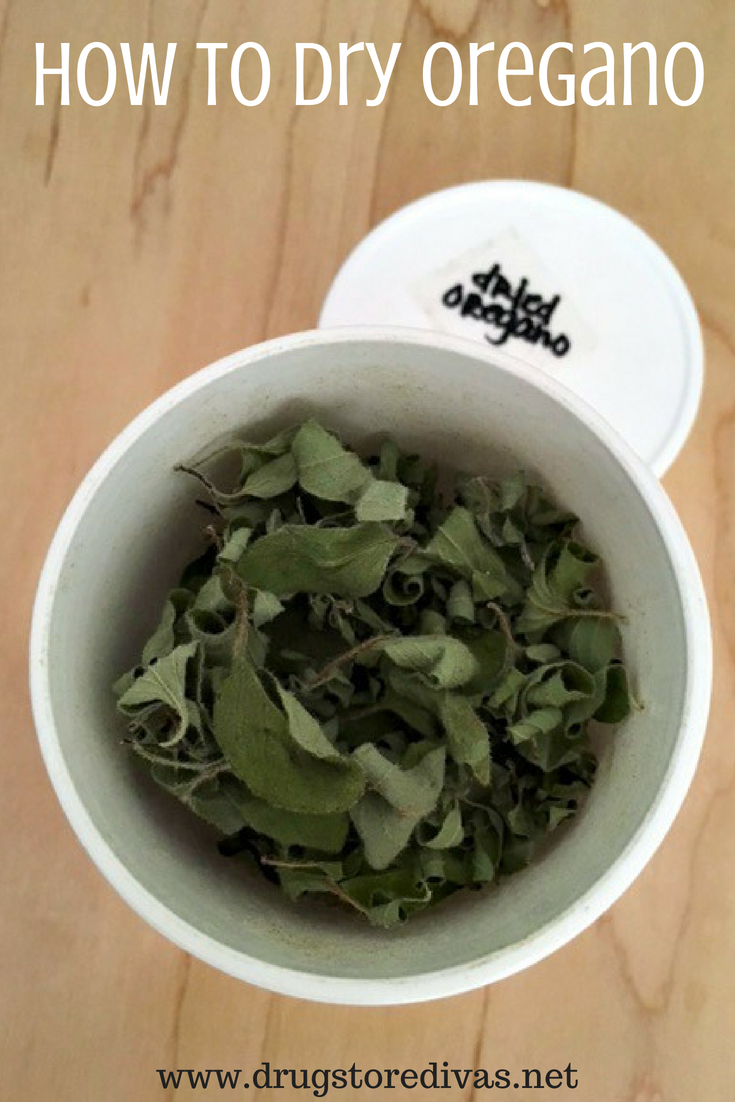 We have this oregano in our garden that would really take over our entire garden if I didn’t prune it on a regular basis. We started it in a mason jar from a kit I bought on Amazon, then transplanted it into our grow box a few months later. It was so tiny then. It grew faster than we could even use it. My aunt told me that I could dry it, but I had no idea how to dry oregano.

Turns out, I’m not alone.

There are actually two ways to dry herbs: you can dry herbs in the oven or you can dry herbs by air. We’re going to specifically focus on drying oregano for this post. In the future, I’ll write other posts about how to dry other herbs.

How To Dry Oregano

We’ve done these both ways. It all really depends on how much time you have to invest in this. I actually constantly have a rotation of oregano drying, so I don’t mind drying them by air. At the beginning of the season, I was only drying one batch of oregano at a time, but now, I have a bunch of different batches drying at once. It’s easy to figure out what is ready and what still needs more time.

If you’re growing your own oregano, look for the plants to start flowering at the top. The flowers are beautiful, but they’re bad for your plant.

Once your herbs start to flower, it means that the herbs will start to get a bitter taste to them. So, once you start trimming them on a regular basis, you’ll be able to anticipate when they are about to flower. And that’s when you want to pick them.

Don’t pull the entire plant, root and all, from the garden. Instead, using kitchen scissors, cut the plant down until it is about four or so inches tall.

For oregano, you’ll also want to look for pieces that are getting “leggy.” Ours does that. Some of the pieces will grow and roam into the rest of the garden. It really wants to live where our kale is growing. So look for these long pieces and, regardless of if they are about to flower or not, trim them as well.

Trimming it on a regular basis will encourage growth. It will also mean you don’t have to dry so much at once. 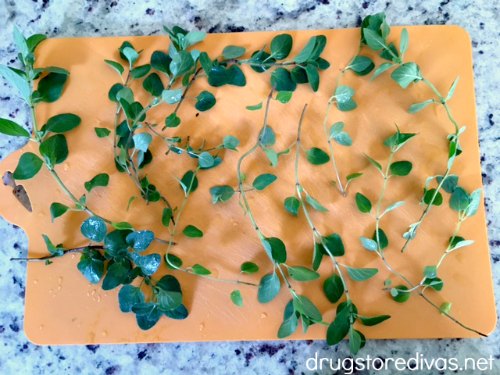 After you’ve picked them, bring them inside to clean.

Start by trimming off any extra stems that don’t have any leaves on them. Toss them. Then, look for anything left behind by bugs: webs, cocoons, excretion, etc. Cut off any parts that has any of that on it and throw it out too.

Wash what you have left in the sink, then shake off any excess water.

For an herb like oregano, leave it on the stems. It’s a lot easier to pull the leaves off when they’re dry than when they’re fresh.

How To Dry Oregano In The Oven

This is the quicker method.

After the oregano is washed, pre-heat your oven to 200 degrees. When it hits temperature, turn the oven off.

Spread the oregano sprigs out on a baking sheet.

Put the baking sheet in the oven and leave the door ajar. You want air to circulate in to help dry the oregano.

Leave it be for about two hours. Then, take it out of the oven and place it in an air-tight container.

How To Dry Oregano By Air

This is my method.

Spread the herbs out on a plastic cutting sheet. Make sure that none of the herbs are overlapping.

Every day, flip the herbs to the other side.

After six or so days, the herbs will be completely dry when you go to flip them. That means they’re ready.

How To Destem Dried Oregano

Hold the herbs at the portion that grew away from the root with one hand, then with two fingers on the other hand, pinch the stem. Quickly, run your fingers from the top to the bottom (where the root was). The leaves will all come off easily.

Throw away the stem and keep the leaves. 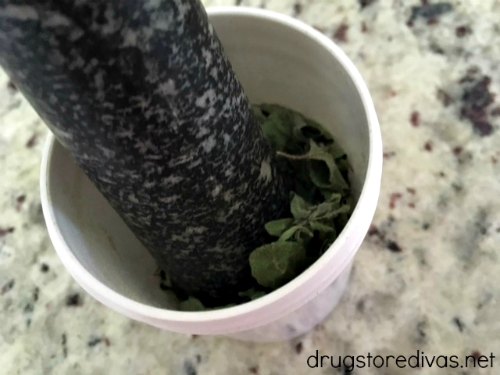 How To Store Dried Oregano

You’ll want to store your dried oregano in a airtight container.

I actually upcycled all the plastic containers that came in our Burga Box kit. I have one container for every herb that we dry.

After I put them in the container, I use the pestle from our mortar and pestle to break them down a little. It breaks out a little of the flavoring from it and enhances the oregano that’s already in there. You don’t want to break it down completely and lose all the flavor.

Then, shake the entire container so that the new and old oregano mesh together.

How Long Will Dried Oregano Last?

Dried oregano will last up to a year in an air-tight container. Don’t let any moisture in there or it will ruin the oregano and create mold.

So, if you are planning to use this straight from the container (as we do), make sure you pinch it out with dry hands.

Do you have any other tips for drying oregano? Be sure to let us know in the comments!