I was on Facebook and found a recipe for cannoli dip posted here. It seemed easy enough, but more importantly, it sounded amazing. I mean, who doesn’t love cannolis? They’re such a pain to make if you actually think about piping each cannoli shell with the mixture, especially since you can’t pipe completely through and instead, you have to pipe from each end. Double the work, right? And I don’t like anything that’s more work than it’s worth.

So when I asked my friend what we could bring for Thanksgiving and she answered with “yourselves,” well, I figured we’d do one better. We’d bring ourselves and a delicious cannoli dip. It was the first time I was making it, so I was hoping it would come out just fine because I didn’t have a back up plan. Luckily, I didn’t need one. This was incredible — and only took a few minutes to make. That’s great in case you’re the one hosting the holiday dinner.

Plus, the entire cannoli dip is only five ingredients, three of which were already in our pantry. The only thing we didn’t have was the cheeses (mostly because I don’t stockpile dairy or perishables). The cannoli dip is so great, people will be requesting it at parties. And it’s so easy, you won’t mind bringing it. 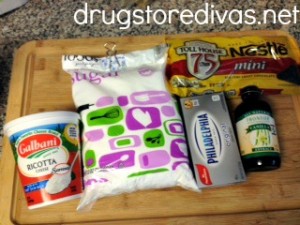 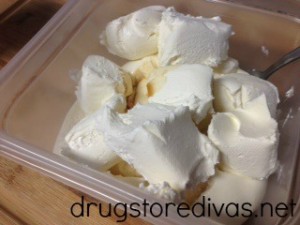 Chop the cream cheese into cube and put it into a container (I used these ones). Mash it. It will still be lumpy and hard. Add the ricotta. Stir. 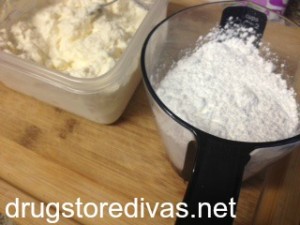 Add half the powdered sugar. Mix. Add the other half. Mix until combined. 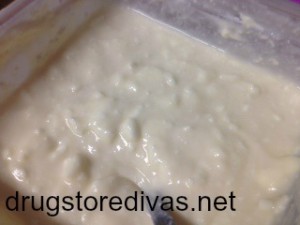 There’s something magical about the powdered sugar that makes this become liquid-y when it combines with the cream cheese. I was so worried that it would be too thick, but it actually was pretty smooth. Not completely smooth, but it was pretty good.

Stir in the vanilla. 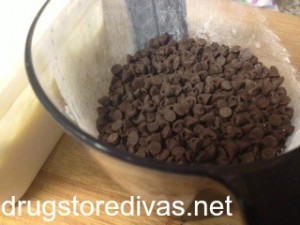 Measure the chocolate chips and add them. 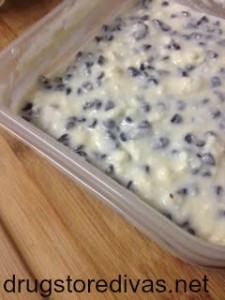 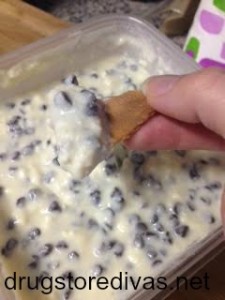 … and serve (or chill and serve later. Either way works). I served mine with broken waffle bowls because it was the closest I could find to cannoli shells.

This was a huge hit, once people got over the fact that it wasn’t as thick as traditional cannoli cream. It can’t be, though, because then it would be dippable and all your chips would just break into the dip.

What and when do you use the ricotta?

At what point do you incorporate the ricotta cheese. It is listed in the ingredients but not mentioned in the directions.... Before or after the powdered sugar. Thanks

Um, when do you add the ricotta? Would cottage cheese work instead?

This is super! I have connoli forms, but have never had the time to make them, this is perfect!!!