You know that meme that’s like, “I feel like I’m in my 20’s until I hang out with 20 year olds and then I remember I’m in my 30’s”? That’s sort of how I felt last weekend. We were hosting a keg party for Pete’s birthday this year, and that’s a young man’s game. So of course, we had to prepare a little more to throw an adult keg party.

There are just a couple things adults need to keep in mind that just legal 21 year olds don’t. Like hydrating. Water is important when you’re out of your 20’s. You just don’t bounce back the way you did in college.

Now, small disclaimer: This post is only for readers who are 21 and over. We absolutely do not condone underage drinking at all. Adults, drink responsibly. If you do choose to throw an adult keg party, do not drive and do not allow any of your guests drive either. And, if you use these tips to throw a party and you have a bad party, Drugstore Divas is not legally or morally responsible for that.

Getting a keg is easy. You go to the store, order it, throw it in your trunk, and take it home. That’s the easy part. The hard part comes when you get home and realize that putting the keg in a garbage pail and constantly filling that up with ice to keep the keg cold isn’t that much fun.

And then you need someone to tap the keg, then pump and pour and hope for more beer in the cup than foam. That’s a young kid’s game.

Instead, get a kegerator.

We were lucky enough to borrow one from some friends. Since it was our first time with theirs, they were able to walk us through it, noting about turning the CO2 up a little for the PSI of the beer we got.

The tap on it is exactly like one behind a bar, and it’s so much easier to pour that way.

Once upon a time, I bought Pete this 13,9% ABV beer because that’s nuts and funny. It basically tasted like tar. But when you’re young, you gravitate towards beers with a high ABV because you want to get the most bang for your buck. And beers were made accordingly.

But then people started growing up. And (most) adults want to drink beer because they enjoy the taste and camaraderie, not to see who can get drunker quicker.

So when you’re picking out a beer for the keg, go with a low-alcohol beer. You can still get craft beers or good mass produced beers with low-alcohol. You’re not serving your guests garbage. But you’re also not serving them beer that will get them smashed off their face either. 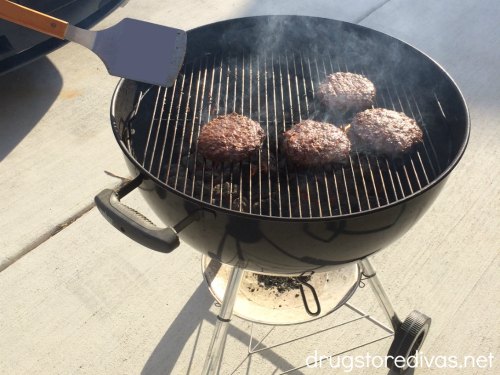 We had so much food at our party last weekend and it all went. Except the garden salad I made. No one wanted to touch that. But the ribs, hamburgers, and hot dogs all went so quickly. And the pasta salads and buffalo chicken dip that friends made vanished quickly. The chips and popcorn didn’t stand a chance.

The less food drinkers have in their stomachs, the faster the alcohol will get absorbed in the bloodstream. And that could lead to getting drunk faster than your guests want. So definitely have food available — and out for all of your party — so guests can graze.

Plus, adults just need food. You don’t want anyone hangry bringing the vibe down.

We work at the weekly farmers’ market selling small batch marinara sauce. To set up our stand, we have a really nice pop up tent. When we have parties, we set the tent up in the backyard with the table and chairs we use for the market.

See, older people like shade. No one wants to stand outside in your backyard and get sunburn. Young kids, sure. Maybe. But adults will complain about how it’s so hot and so sunny and will want to escape inside your house to hide from the sun.

But you don’t really want the party indoors.

So set up a tent with a bit of shade. And you can put our some spray bottle fans too. We have one of those for our market days and it’s a blessing.

How many captains and folding chairs do you have? You need every single one of them to be outside in your backyard.

Older people like their shade, I said before. But what they like even more than that is to sit. No one wants to stand all party long. If your only seats are inside, they’ll sit inside. So make sure you have seats set up outside.

And put them in bunches too. A few chairs in a row is a little weird. And I once got heckled for putting all the chairs in a large circle. “Should we be singing kumbaya all party?” someone asked me.

So now I put them out in tiny bunches of three or four and let people rearrange them when they get outside. And they will rearrange them. Even our heavy cast iron chairs get dragged from under their umbrella-topped table into … the shade near our house. Sigh. Just let people live.

People want to come to your party and have something to do. Sure, they can stand around your kegerator and talk, but that can get boring real quick. So set up things to keep them occupied, like outdoor games.

You see how that also doubles as a way to keep them outside?

We made yard dice and gigantic Jenga. We also have cornhole, ladder ball, and bocce ball that we borrow from my parents. Before the party, we spread those out across the lawn so that guests can play as soon as they get there.

We also have our garage turned into a home theater and set up the Wii, just to give our guests another room to play in. 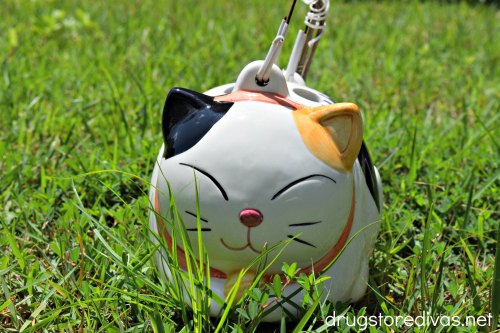 The mosquitoes are no joke this time of year. And no matter what, like Isla Fisher in Wedding Crashers, they will find you.

So put out citronella. But not in an ugly, clumsy way. You can buy a super cute citronella coil holder. Light the coil and put the holder out on display. It’ll keep the mosquitoes away, plus will be a talking piece for your guests.

And yes, that cute cat is actually a citronella coil holder.

I started this post mentioning this, but it bears repeating. Have water. Not only do you want your guests to stay hydrated in the heat, but — shocker — some of your guests may just want to drink some water.

We usually have plain bottled water and cans of flavored seltzer too. We put them in a cooler in the backyard so our guests can just grab them. Sure, some of our guests still come inside to fill a cup of water from the fridge, but I like to have it available for them outside too.

Are you a pro at throwing an adult keg party? Let us know your tips for throwing a grown up keg party in the comments.

I need to confess I never been to a real keg party. My college wasnt into keg parties but this seems interesting!

This sounds like fun however there's a lot of work involved in organising such a party. I'd definitely choose to go to one and not organise one. I need the citronella coil holder!

This makes me so amazed! I really love those ideas you've mentioned. I will definitely share this with others.

Oh wow, you really went all out with the kegerator! Sounds like the party was a success!

These are great suggestions. I haven't thought of throwing a keg party in years, but after reading this, that may change, I also love the citronella holder. Thanks for the inspiration!