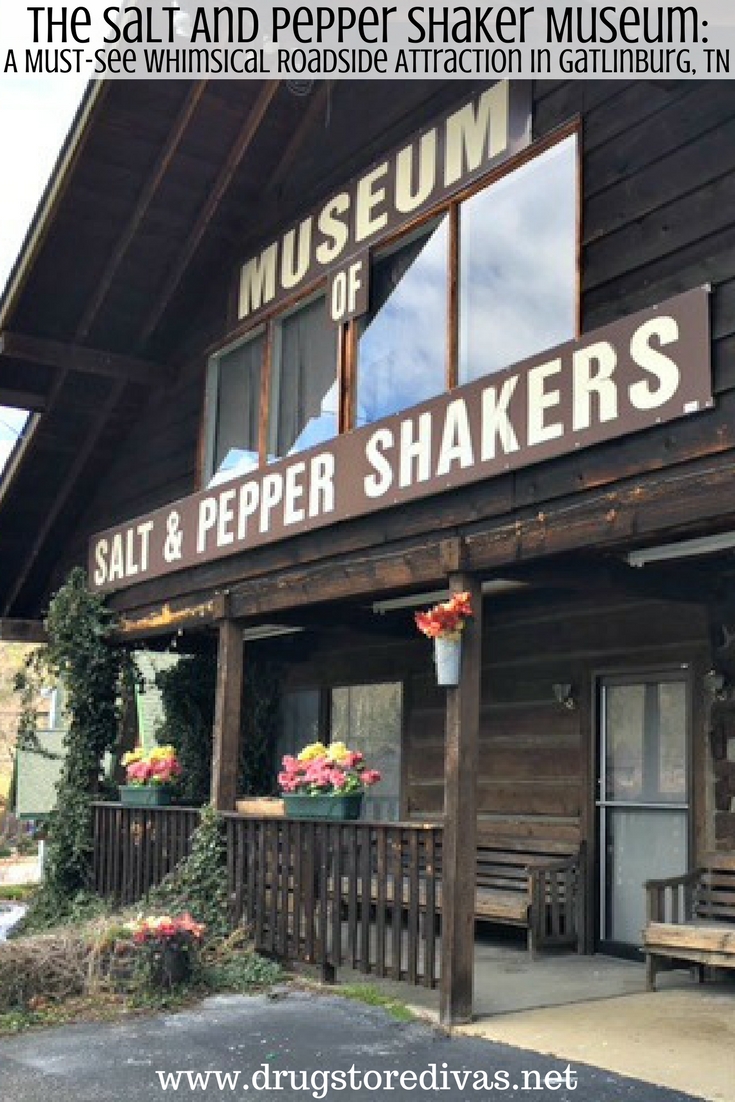 My mom has a hand painted salt and pepper shaker set that she got at a flea market once upon a time. It was then that I found out she really has an affinity for salt and pepper shakers (despite the fact that I think we had the same set my entire lifetime up until that point). So when we were headed to Gatlinburg, Tennessee and saw it was home of Salt and Pepper Shaker Museum, I knew we had to go.

The Salt and Pepper Shaker Museum (461 Brookside Village Way; Gatlinburg) started around 2001 because former-museum owner Andrea Ludden (she passed away in 2015) just had too many shakers. That’s the short of it. As you wait outside the entrance, a clip from Food Network’s Unwrapped plays and gives you more details. As Andrea’s collection grew, her husband Rolf build shelves for her to display them in their home — even in their bedroom.

If I was Andrea and Pete was Rolf, that’s when he would tell me enough is enough. But Rolf seems to have indulged Andrea’s hobby. As did her son. He bought her a digital camera and she, a former anthropologist from Belgium, started cataloging each shaker.

Her collection grew to the over 20,000 pairs you see in the museum now.

But here’s the kicker that I found on the Salt And Pepper Shaker Museum’s official website: The couple eventually moved from Texas to Gatlinburg, then opened the museum.

Pete and I moved from New York to North Carolina, then from an apartment to our home seven miles away. The amount of stuff I packed and moved every time was nuts. I have an emotional attachment to pretty much everything, so it’s impossible for me to not half a zillion boxes when we move. But Andrea … it sounds like she had 20,000 boxes of just salt and pepper shakers to move.

And then they opened the museum of salt and pepper shakers. 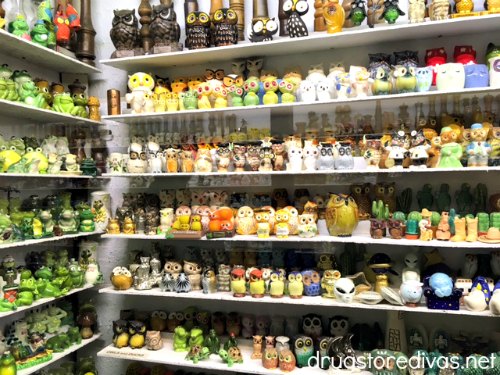 Which was crowded. We went right before lunchtime on a Tuesday after Spring Break, kind of anticipating that the place would be empty. How many people, other than a blogger and her retired parents, would be heading to the Salt And Pepper Shaker Museum on a workday?

Surprisingly there were lots. Including us, there were almost a dozen people in the four-ish room museum.

But not all the shakers are from America. My favorite one is actually from the Bahamas and has a sweet poem on it about how friends are always welcome at your table. 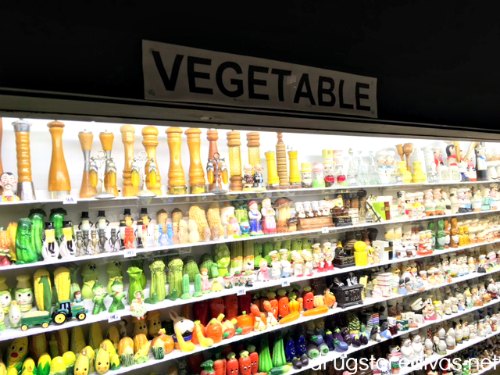 There is a section dedicated to vegetables, which makes sense. Then a full section dedicated to squirrels, which makes less sense. Like, I understand the salt and pepper shakers shaped like corn. I put salt on corn. And my mom understood the ones shaped like chickens because that has become a universal kitchen graphic. But how in the world did dozens — nay, hundreds — of people think, “You know what would be a good design for a salt shaker? A squirrel.”

There were tons of cats and owls, which make as much sense as squirrels in a sense, but I love cats and owls. And the people who were touring the museum just ahead of us love cows. So the husband kept saying things to his wife like, “. Take a photo of the cow on the beach ball” and “Look how funny that cow shaker is. Did you ever see such a thing?”

My dad said something similar to my mom and I as we were about to leave. He said, “Did you see that Abe Lincoln shaker?” We had missed it. That’s easy to do in a museum with a dozen Betty Boop shakers and a full section dedicated to feet. We turned around to see Abe Lincoln’s bust, tall top hat and all, flanked by (what I can assume are) two freed slaves. It was a different time then, I justified, but I really have no idea when that shaker was bought or made. 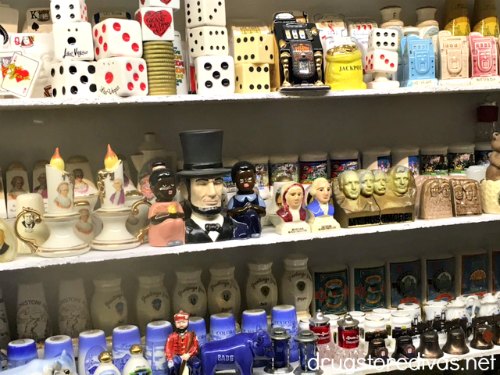 I do know that there were some questionable salt and pepper shakers available for sale. In the gift shop. In 2018. But I guess that’s how history goes.

The Salt and Pepper Shaker Museum captures history. There are QR codes on the walls that you can scan to learn more about shakers, pieces of paper stuck to the glass that tell you about the history of some of the shakers, a wall of newspaper clippings (not all in English) written about the museum, and maps of a section of the world for you to add pins to show where you’ve come from. Small pins for visitors, large pins for collectors. And, if you happen to come from far away, as many guests did, you can just draw your country on the map and add your own pin. 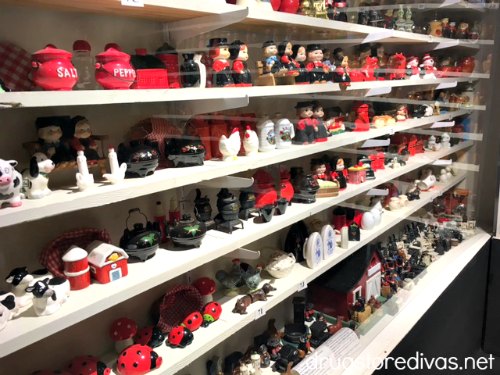 And, if you’re planning a trip to Gatlinburg, TN … 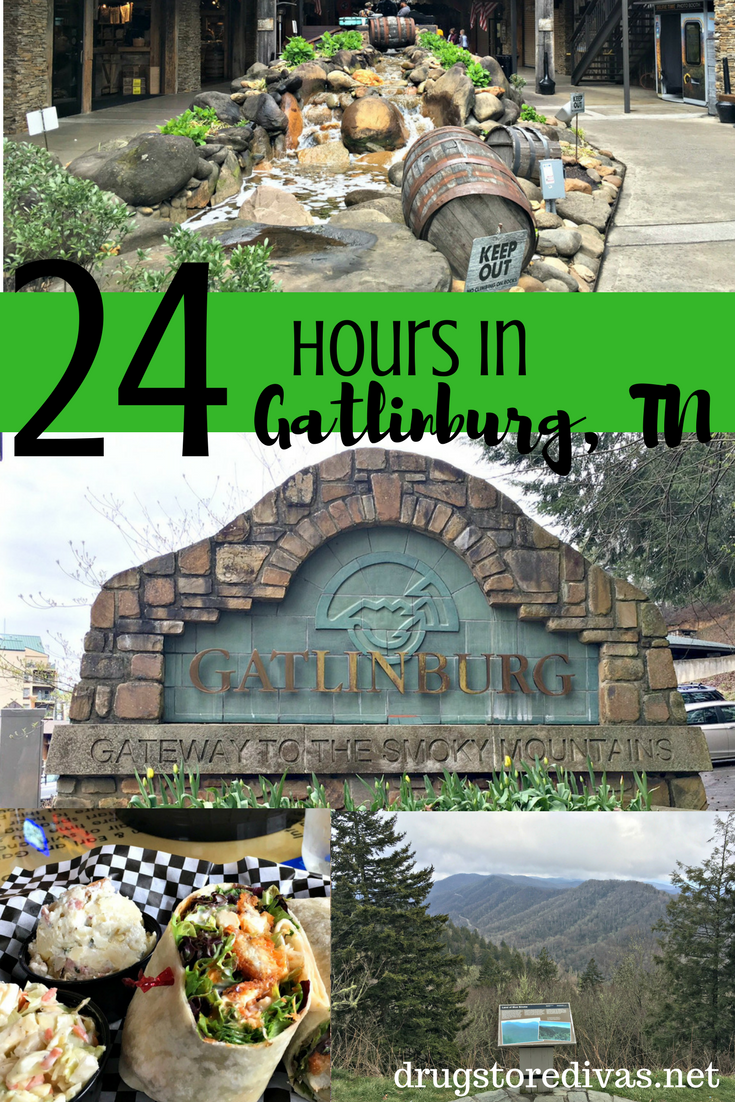