Drugstore Divas received this bowl to assist in this review. All other ingredients were purchased by Drugstore Divas without compensation. All thoughts and opinions belong to Drugstore Divas and are factual (we actually did have a soccer party the day after our wedding because why not). It was wedding week here last week, then the wedding on Saturday, followed by entertaining time. It was a lot of parties and a lot of food. Thursday we had a BBQ with chicken, hot dogs, and burgers. Friday was the rehearsal dinner (which was a catered NC BBQ spread). Saturday was the wedding. And Sunday, we held a World Cup party at our clubhouse.

By the time Sunday came, I just wanted to bring something healthy to the table. We had fried chicken (which was amazing), but I decided that our party wouldn’t be complete without a watermelon. And with over 30 people at our soccer party, the entire watermelon was sure to go.

Great timing that Good Cook sent a watermelon-shaped ProFreshionals Cut Fruit Bowl just a few days before so that we could check it out here at Drugstore Divas. Side note: This product is exclusively available at Bed Bath and Beyond. It was so cool. It’s three parts: a top, a bowl with holes at the bottom, and a solid bottomed bowl. The theory is that you put the fruit (doesn’t have to be watermelon, but that’s what I wanted) in the bowl with the holes and any juices will drip out into the bottom bowl so the fruit stays fresher longer. 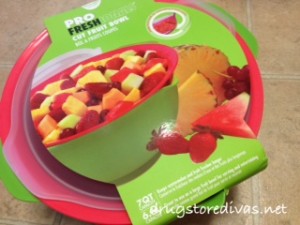 A few weeks ago, I was at my friend’s house and she had watermelon for her daughters. Instead of cutting it into traditional triangles, she made watermelon pops (inspired, she said, by Pinterest). They were so easy for her young daughters to grab. Plus, it was a lot easier for me to eat while keeping a conversation. Instead of having a watermelon wedge shoved in your face to get a bite, you eat down the pop and can talk and not worry about juice dripping down your face. 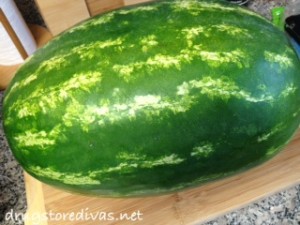 Cut a watermelon in half (lengthwise works a little better if you have a smaller knife. I used a Good Cook chef’s knife, which is the longest knife we have, but you should go for the watermelon knife). 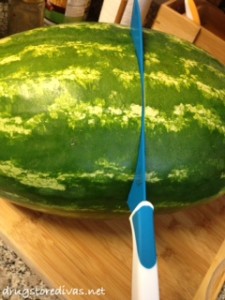 Place the cut side down on a cutting board and cut lengthwise, about an inch apart (I started in the middle and worked out). 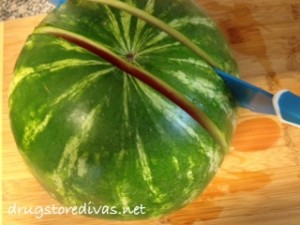 Turn the watermelon half and cut lengthwise again, about an inch apart (again, I started in the middle and worked out). 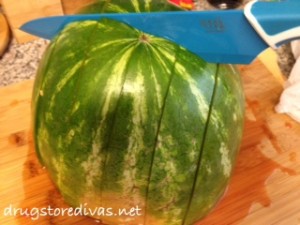 You will end up with fantastic pops. What I don’t show in the photo (because I wanted you to be able to see the full pops) is that you can actually just leave the watermelon as is after the cuts and you can pull pops straight from the middle. I couldn’t do that this time because the fruit bowl just isn’t the right size for the huge watermelon I bought. 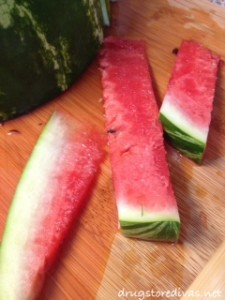 If your knife isn’t cooperating, after the first set of lengthwise cuts, you can pull an entire piece off and cut it into one inch pops. I added the watermelon pops into the fruit bowl, put the top on, and easily carried them to the clubhouse for our party. 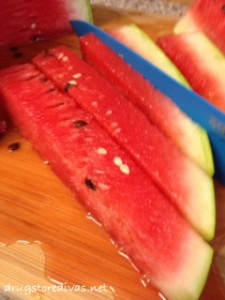 There was juice that formed dripped into the bottom, and my friend and I brainstormed about making watermelon shots with the juice. Take the juice, add a little seltzer (or vodka if that’s your thing) and enjoy. If you would prefer to just toss the juice, there’s actually a spout on the bottom bowl just for that.

This bowl is seriously going to be a game changer for our summer parties – and just my life in general. I’m allergic to some fruits (cantaloupe, honeydew, and pineapple are ones I really have to stay away from) but when fruit just sits in juice for a day or two, my allergies will act up. I always blame the juice. So for this bowl to keep the juice from the cut fruit, it’ll definitely extend the time I’m able to enjoy fruit. And that sounds good to me.

You were certainly busy! And what a lot of great fruit recipes you have here! I have stumbled and pinned this one and want to thank you for stopping by The Yuck Stops Here recipe link party this week. Can't wait to see what you'll bring to the party next week! HUGS

I love this idea! Healthier than sugary freeze pops!!

I've always seen watermelon as a part of summer, as much as swimming pools or picnics. One of my favorite fruits! Thank you for linking at the In and Out of the Kitchen Link Party. Hope to see you again next week.

I need me some watermelon now!!

Thanks for sharing (and making me crave it)