July 2021 update: Seating at Paranormal Cirque is limited to comply with CDC guidelines. Masks should be brought; gloves are suggested. 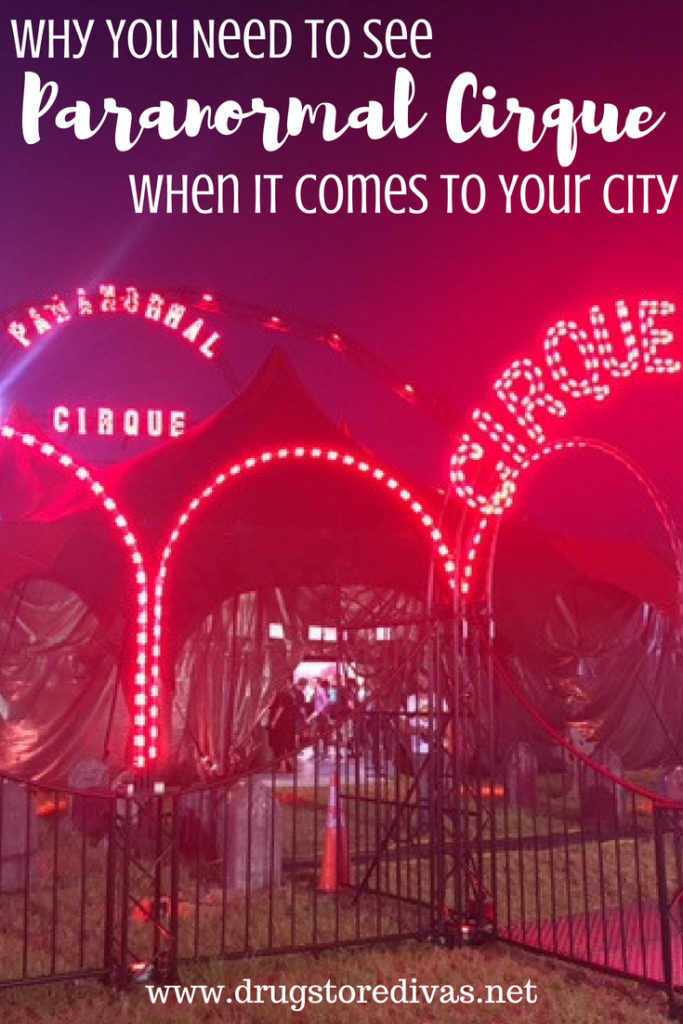 We went on a whim last night and showed up 45 minutes early like the website says. I wouldn’t really recommend that because those 45 minutes consisted of us sitting in our seats eating overpriced popcorn. But, during that time, some of the Paranormal Cirque cast are around, scaring the rest of the audience that showed up early for the “pre-show.”

When we pulled into the parking lot, super creepy Rotten Sally met us with a hatchet and got all creeptastic when Pete was filming her. From that moment on, we knew we were in for it.

When I was trying to explain what I thought Paranormal Cirque was to Pete, I told him it was a goth Cirque du Soleil. We got there and that was actually pretty accurate.

During the pre-show, some of the Paranormal Cirque performers walk around the audience with items like chainsaws and chase you from the entrance tunnel to your seats. This is when we heard people either screaming out of fright or laughing. Because you do laugh when you get scared. Especially when Freddy Kruger jumps out in front of you when you’re alone in the dark.

The show opens with the Grim Reaper telling you not to take photos and some other instructions that are difficult to understand. Paranormal Cirque is a touring circus that basically just drops a huge black and red big top in an open field (in our case, it was at the Wilmington International Airport). So the sound quality isn’t always that great.

The first main act is what the woman behind us called “sexy zombies.” Five incredibly ripped (undead) men come out to perform the most incredible parallel bar act. There are actually seven total bars, and the way these men can swing on them — forward, backward, two on the same bar — it’s just phenomenal.

I was blown away by them.

I laughed a little though because they were really committed to the zombie act. They had to be. This is Paranormal Cirque, not the company’s parent show: Cirque Italia. So these men would lumber around (which is actually the technical term for how zombies walk, FYI), and then jump up to these bars and do incredible handstands and flips, then get off the bars and continue lumbering.

But if you’re impressed with this, your jaw will fall on the floor and stay there through Nicolette Fornasari’s aerial act.

I don’t even have the words to describe her aerial straps act. She just wraps her body — or just her ankles — in the straps and flips and twirls from the rafters. I watched a woman trip walking out of Paranormal Cirque. Like really, there are people who can’t walk out of the big top without casualty; and here is Nicollette swinging upside down from it.

Hands down, she was my favorite part of the whole entire show.

But the rest of the show was incredible.

After the sexy zombie act, there was the Cyr wheel act (basically, a huge hula hoop that’s used to do aerial tricks in). I was watching him, imagining Heidi Klum on America’s Got Talent saying, “I would pay to see that” and then realizing that I actually did just pay to see that.

He was followed by an aerial hoop act, which was fantastic.

In the middle of all this, there’s a clown and variety show aspect to it. A man dressed as a clown comes through the audience looking for a strong man to help him. He finds a (planted) audience member who ends up getting bit and turning into a zombie, then later a vampire, and finally, in the second act of the show, a magician.

But let’s start with the zombie. Because that’s when he does plate spinning. He actually ends up spinning nine at once, which is just amazing.

When I was in middle school, we had a circus lesson during gym class. We were supposed to do plate spinning and devilsticks. It was hard. Really hard. But this guy, he has to act in character, has to be very expressive and funny, has to play with the audience, and has to spin nine plates at once.

Later, he has to direct four (actual) audience members to put on a funny play.

And, after a 15-minute intermission between acts, he has to come back to do some magic tricks that include his assistants (who are also the women doing the aerial acts) disappear. Seriously, this guy deserves four salaries.

The show’s grand finale had me screaming. That scared screaming. Not scared from chainsaws in my ear, but scared from the death-defying act in the air: The Wheel Of Death.

The performer was having a great time walking on the outside of the Wheel. And clumsily jumping rope.

I’m sure the clumsiness was part of the act, but I couldn’t help but scream when the jump rope caught his foot and he wobbled. And when he put a dark hat over his face, I screamed “no no no” but it wasn’t loud enough for him to hear.

The whole entire show was just incredible. I’ve been to the actual Cirque du Soleil and that is beyond phenomenal. But it’s also pretty expensive (tickets start at $69), so it’s kind of inaccessible for the masses. Paranormal Cirque tickets start at just $10 for kids and $20 for adults (as of this post’s publishing date of 2018; prices are subject to change, obviously). Plus, for our show in Wilmington, there was even a promo code to take $2 off. We sat in the “red” section (which is the cheap seats), but our view was great, so don’t even worry about sitting back there. The big top is pretty intimate, so there’s not a bad seat in the house.

Have you been? Leave your Paranormal Cirque review in the comments!

Small note: Besides the first image, these images have been borrowed from Facebook or Instagram and credit is given to the owner. They do not belong to Drugstore Divas. Because, as I mentioned, the Grim Reaper told us no photos or videos were allowed inside.

Also, second small note: We paid for our tickets. We weren’t paid to post a Paranormal Cirque review. Honestly, I don’t even know if the show has seen this post, but it is 100% not sponsored. I wrote it because I genuinely liked the show and really think everyone needs to go.

Just bought tickets to the show in Lancaster PA this weekend. Cannot wait after reading your review. Thank you

Stumbled upon a random ad for the show and it'll be near-ish me over the next few weeks. Wavering about taking the day trip, but after reading your post -only review I've read- I'm definitely buying a ticket! Thank you for sharing your experience! Now I'm super excited!!

I'm so glad you're going. You will definitely enjoy it, especially for the price. Please come back and let us know what you thought!

How long is the show?

The show itself is around 2 hours, including intermission. The official website says show up 45 minutes ahead of time, but I would advise against it.

Went last night. A really fantastic show. It was a little hard to understand. That would be my only complaint. A little better sound system and this would be a 15 on a scale of 10. What a great mix of comedy. magic, athleticism and horror. Easy ticketing process (and I was glad I got there early) and the people who run the group are great and very accommodating. Couldn't ask for more.

I will definitely go when they return and will recommend it to anyone and everyone. I hope to see it again soon.

We had the same thoughts as you. It was fantastic, but the sound could have been better. So much was based on the visual, so I was okay without hearing it all -- but I would have liked to hear.