This Oconaluftee Indian Village: A Must-See In Cherokee, NC post is sponsored by TripAdvisor, not by the attraction itself. 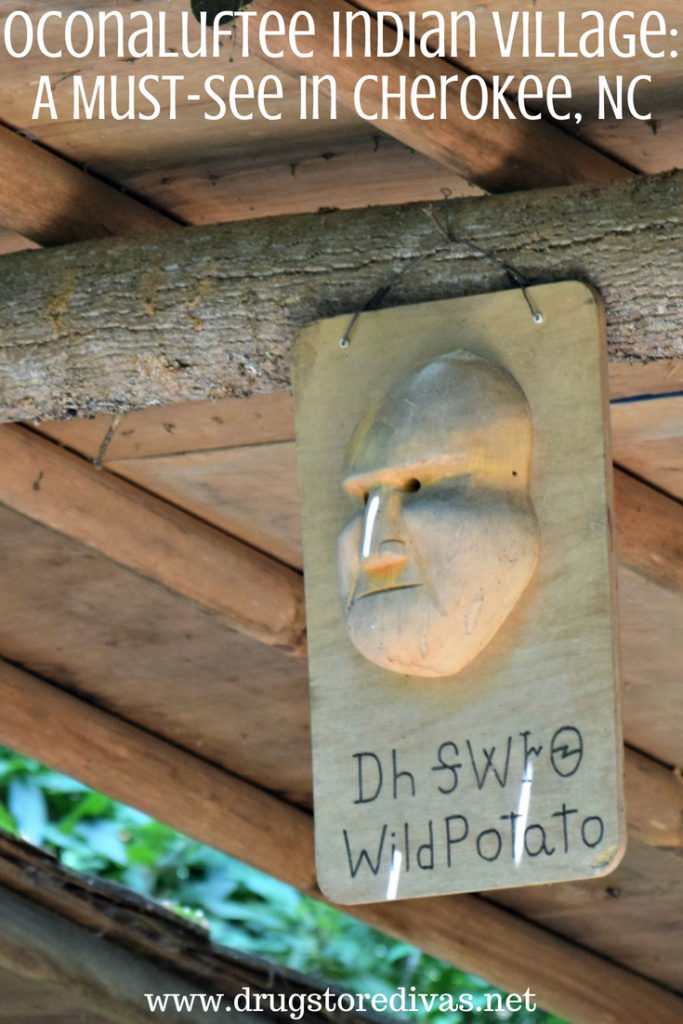 My parents and I visited Gatlinburg, TN a few months ago, but slept at the casino in Cherokee, NC. I was just in awe of Cherokee. It didn’t hit me that it was the Cherokee Indian Reservation until we were driving through. In hindsight, it’s obvious that Cherokee, NC would be where the Cherokee are, but I think I had just associated it with the casino for too long.

At that point, I had never actually gone myself. My parents and grandma had been to Cherokee to gamble, and no one mentioned anything else about the town to me.

There’s more to Cherokee, NC than the casino.

When I realized this, I knew we had to bring Pete.

We recently got the chance to go back. Of course, we gambled (and visited my money from my last trip), but we also spent the afternoon at the Oconaluftee Indian Village (778 Drama Road; Cherokee, NC). It was amazing. 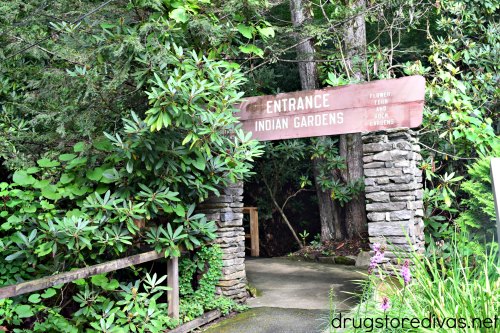 Pete isn’t much of a gambler, but he loves history. So when we were planning this trip, I knew we had to do more than just sit at the Let It Ride table. A quick look at the Things To Do in Cherokee, NC section of TripAdvisor’s website found the Oconaluftee Indian Village and the Unto These Hills drama show.

I asked Pete what he would prefer, and he thought the village would be great. I easily booked the tickets through TripAdvisor. Then, I was emailed a voucher to bring with me to the village to exchange for actual tickets.

After we did that, we waited for our guided tour to start. Definitely wait. Tours start every 15 minutes from 9:30am to 4pm, so the longest you’ll be sitting there is 14 minutes (assuming you come just as a tour is leaving).

You can do a self-guided tour, but it’s not that informative. 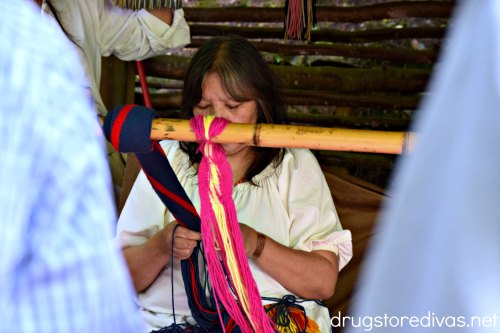 The tour will take you through traditional finger weaving, beading, tool making, and more. The guide will explain how the Cherokee lived as you go through each station. It’s all so natural, too. Our guide explained how river rocks were used to smooth pottery. And she was explaining this as two women were making pottery behind her (pottery that you could purchase later in the Oconaluftee Indian Village gift shop).

If you took a self-guided tour, you would see the women making pottery and probably move on. You would miss the fact that pots used to carry embers have pinched sides so that you don’t get burned. 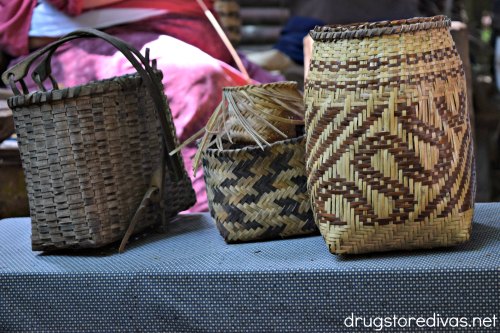 You might see a traditional bow and arrow, but you wouldn’t realize that bear intestine was used for the string of the bow.

This isn’t a museum where facts are written on cards and displayed. This is a living museum with actual people, not actor portrayals.

At the tour’s conclusion, you are left alone to explore traditional homes from different centuries. 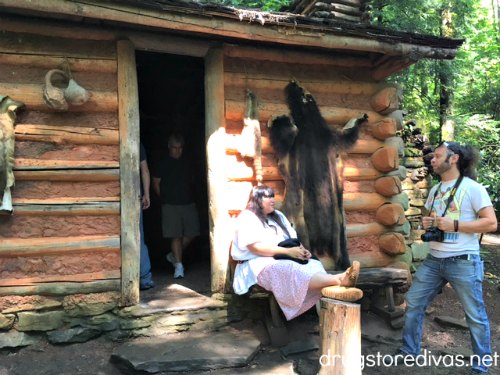 Madeline was a young woman who sat outside the 16th century home. She. Was. Amazing. Absolutely amazing.

Madeline was so knowledgeable, so intelligent, and so poised.

We live in a time right now where the political climate is power charged. And people use any opportunity to spread their opinions and agendas, no matter how potentially harmful that could be.

So, she told us, at work one day (because you have to realize, this is a job for them while it’s a visitor’s attraction for you), someone was speaking to her about illegal aliens trying to come into America. “If you’re not from here, go back to where you came from,” he said to her, speaking about refugees and immigrants. “Well,” she said, calmly. “Then, goodbye.” He explained to her that he is American. She rattled off many Native American tribes and asked if any of them were his nationality. He said no to all of them. She nicely and calmly said, “Well, then goodbye.”

Everything she said was so calm and even toned. And informative. 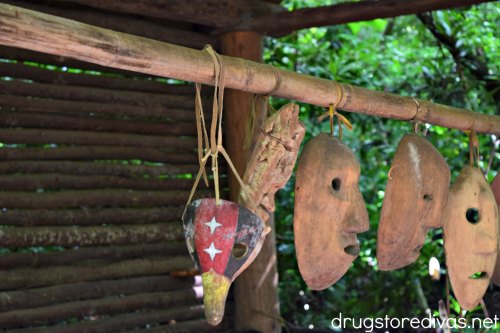 She told us how the Spanish came and to them, riches were fur coats. Only the wealthiest people could afford them. When they saw the Cherokee and every member of the tribe — even the smallest babies — were wearing bearskin, they were shocked.

She told us about different Westerners and how they related to the Cherokee. How some were enemies and why, and how some (like the English) were friends (because the rebels were their common enemy).

It was stuff that you don’t often learn in history class. You learn about how the Pilgrims brought Thanksgiving to the Native Americans. It’s not until you are older that you learn travelers also brought smallpox.

Smallpox, we learned, was the first disease the Cherokee couldn’t heal with their medicinal teas and sweat houses. And man, do I want a sweat house now. It’s a wooden house with benches on either side. Huge rocks were in the middle and would have been set on fire. Someone who is sick would lie inside and “sweat it out” (which is something I always say when I get sick, so it was interesting to see a whole remedy based on that).

We got to see storage homes and canoes, too. 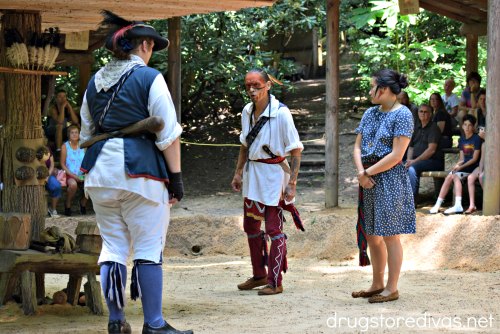 Then, at 12pm and 3pm, there is either a Time Of War reenactment or a traditional dance show. The Time of War shows run mid-June through mid-August on Tuesdays, Thursdays and Saturdays, and we were lucky to catch it.

Many of the actors in the show also act nightly in the Unto These Hills show. That show tells the story of the Cherokee people during the Trail of Tears, when some of the Cherokee were forcibly removed from their homelands. It runs nightly (except Sunday) from June through mid-August. That’s why the Time of War show at the Oconaluftee Indian Village has the same schedule.

The village is from late-April until late-October. 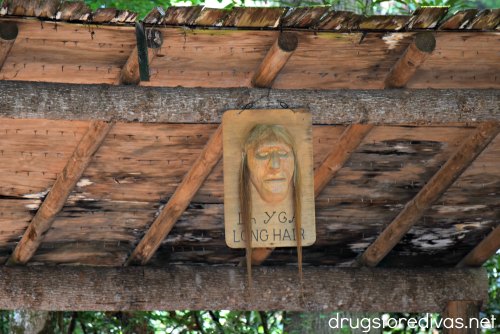 You can buy a combination ticket for the Oconaluftee Indian Village, Unto These Hills, and Museum of the Cherokee Indian, but that ticket wasn’t available on TripAdvisor’s website. A ticket for Unto These Hills was, so I think we’ll have to purchase that and see the show next time.

We didn’t find any Oconaluftee Indian Village coupons either, but it’s definitely worth the $20 admission price. That price includes the shows, guided tour, and two 30-minute lectures.