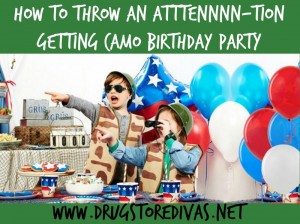 Does your child love anything Army and camo? You have to throw them a camo party then. But don’t fret. We have a great post to help you throw a great camo birthday party.

How To Throw An Atttennnn-tion Getting Camo Birthday Party

Start out with Camo Army Party Supplies. Everything you need is in Birthday Express‘ Camo Army Soldier Value Party Pack. It comes with invitations, plates, cups, and more. Everything you need to set the perfect camo birthday party table is in the pack. Be sure to ask your guests to wear their camo (think camo shorts) to the party. Let the birthday child feel special, though, and pick up this camo vest and camo helmet for him or her.

You still want to decorate, though. Definitely start with red, white, and blue balloons. Anything you have left over from July 4th or Memorial Day will work too. Then, check out something like the Camo Army Solider personalized banner. Make your birthday cake and top it with toy soldiers. That would be adorable. Plus, if your child has any type of Army toys (think tanks, GI Joe’s, etc.), you can put those out and not even have to pay for them.

And don’t forget about Xamo Army Games & Favors. Check out the Camouflage Tank Party Game. It’s like pin the tail on the donkey, but you are trying to get the tank sticker onto the target. For favors, check out something like the Camo Army Solider Filled Favor Box. It includes binoculars, a compass, a dog tag, aviator sunglasses, and Army soldier stickers. You can give one to each child or you can let them pick an item if they win a game.

Be sure to check out our other themed party ideas:

I love this! Perfect theme for my sons birthday party that will be coming up in a few months. Love the ideas!