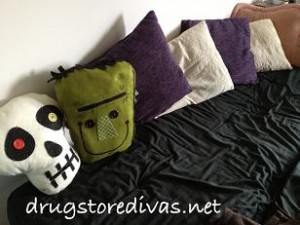 It’s an unpopular notion, but I am not a fan of Adult Halloween. For children, I love it. Dress up, trick or treat, come home, eat sugar until your stomach hurts, stay up all night because of said sugar.

When you’re little, it’s one of the best holidays ever. I mean, who doesn’t love free fun size Snickers when you’re fun size? 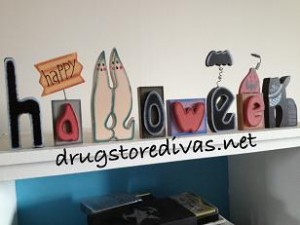 But decorating, I absolutely love that. I love making your house festive. It’s just such a fun environment to live in.

I was so excited to get a chance to work with Oriental Trading to review new Halloween decorations this year.

My absolute favorite item is the Zipper Mouth characters. They’re so big. The monster pillow is 15-inches high and the skeleton is 13-inches. They’re the perfect height to match the other throw pillows that we have sitting on the couch. Plus, they kinda look so great there, I’m thinking about just leaving them year round (especially since they’re new and still really solid, so they’re the best to lay on).

Plus, they’re fun just to play with. 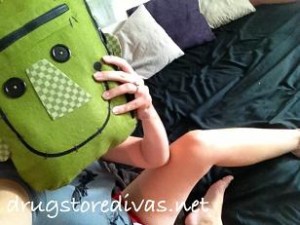 I definitely texted the photo on the left to Pete when he was at work and … well, I was at work too. But my job just involves taking selfies with a monster pillow.

The second thing I set up was the Happy Halloween blocks. When I look at the photo online now, I see that each letter (except the l’s) are separate blocks. But when I ordered, I thought they were attached, so imagine my surprise when I opened them. I actually love that each letter is individual. If someone knocks into a letter, only one falls down. The entire sign doesn’t come crumbling down.

The blocks are really high quality too. They have a nice weight to them and there is a lot of detail in the graphics on them. There are so many colors that it pops against our white wall. Plus, since they’ve been set up, we haven’t had the ability to pile junk on top of the bookcase, so that’s a plus. 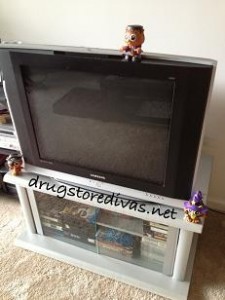 If you know me, you know I love owls. As soon as I saw the Halloween owls, I knew I had to decorate with them. I originally set all three of them up by the TV, with one hanging out on top. I kept looking at the one up top, worried that he might tumble, so I ended up moving him to another shelf.

The owls are pretty heavy (for their size, at least), and I just didn’t want to always worry about him flying away.

I absolutely love them. They’re really cute and cartoony, which is how I like my Halloween. I don’t need any dark dreary ghouls or tombstones all over. Everything scares me, so I try to make sure my decorations don’t.

We have two of the owls by the TV right now, so they’re pretty eye catching. So much so that Pete’s dad actually ended up placing an order for them when he was visiting last weekend. Now we can match, which is awesome. 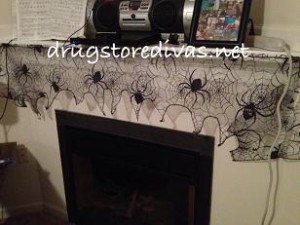 What won’t match is our fireplace (because, well, we have one and he doesn’t). We got the spiderweb mantle scarf for above the fireplace and I love it. I absolutely love it. I want to say it’s my favorite item, but I’m pretty much obsessed with each item we got. There’s none that I like more than the others, but I really love the mantle scarf. It’s just so big and bold. Every time I look at the stereo (which I do often, to be honest), the mantle scarf pops out at me. It completely dresses up the corner where the fireplace is and made such a dramatic change in the room. I want a mantle scarf for every holiday from this one out. It just makes a huge difference.

And that’s what decorations do. They can really change the feel of a room. And right now, it’s beginning to feel a lot like Halloween.

I love that mantle scarf too! I go crazy for the kids and put out cobwebs and animated figures and scary music and blow fog, lol.