We attended an advanced screening of Criminal. This is our Criminal movie review (although it was not required of us and our attending had nothing to do with this blog). 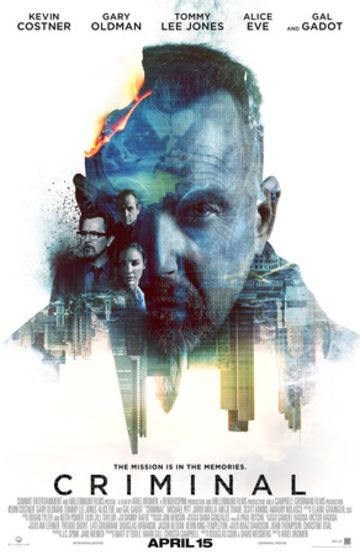 I don’t prefer movies with blood. If I’m choosing a movie to watch, I always want one with humor, with romance, and with a happily ever after. I don’t want blood or violence or things blowing up. And somehow Kevin Costner’s latest movie Criminal had all that. It had humor and romance and a happily ever after. And blood and violence and things blowing up — and it had my attention every single moment.

Costner plays Jericho Stewart, a convict who is just awful. He spent the majority of his life as a number. When we see him, he is currently chained by the neck in the hole of one of the numerous jails he’s lived in over the years. He lacks the ability to differentiate right from wrong — and is strong — so it gives him the ability beat up anyone or anything without remorse … or the idea that he should be remorseful. He’s like this because he was dropped as a baby, causing frontal lobe damage. His neurons that help you feel emotions just never formed.

This makes him a perfect candidate for an experimental memory transfer when CIA agent Bill Pope (Ryan Reynolds) dies … and the secret of where a Dutchman with the ability to take over the US’ military is dies with him. Dr. Fraanks (Tommy Lee Jones) is called in to do the procedure. Despite working on it for 18 years, he’s only seen success on mice. He’s still five years away from human trials, but he doesn’t have five years. CIA head Quaker Wells (Gary Oldman) gives him 48 hours.

And so he does the procedure, which (slight spoiler alert, but you had to have figured this out because if not, the movie wouldn’t have a plot) is a success. So now you have confidential secrets in the mind of a unpredictable murderer.

But a funny thing happens when you have someone else’s memory. You, well, have someone else’s memory. You remember what they knew — how to order grapefruit in French, your security code, the way your daughter likes her waffles. It’s as detrimental to a criminal as it is to the CIA, depending on how you look at it. But to the viewer, it’s nothing short of movie perfection. It makes you feel so much for this character. You get so involved in him that you get caught off guard when you start to tear up at a movie that, just a few scenes previously, showed you a scene of three people dying in a car fire.

When Criminal ended, I thought the exact reason why I hated that other movie is why I liked this one. Costner does such a great job of developing Jericho that you become so emotionally invested in him. You know he’s a bad guy — or was a bad guy — but you just fall in love with who he becomes and you root for him. You want him to succeed because, really, he deserves it. You just hope for him.

It’s amazing to have such character development in a movie with a run time of 113 minutes. I’ve watched multiple seasons of a series and still never felt the emotional connection to Costner’s Jericho as I did in this film. And Jones’ Dr. Franks is so good too.

Yes, this is bloody and violent and things blow up. But you’re doing your heart a disservice if you miss this one.

Criminal is out on DVD now. Get it here.