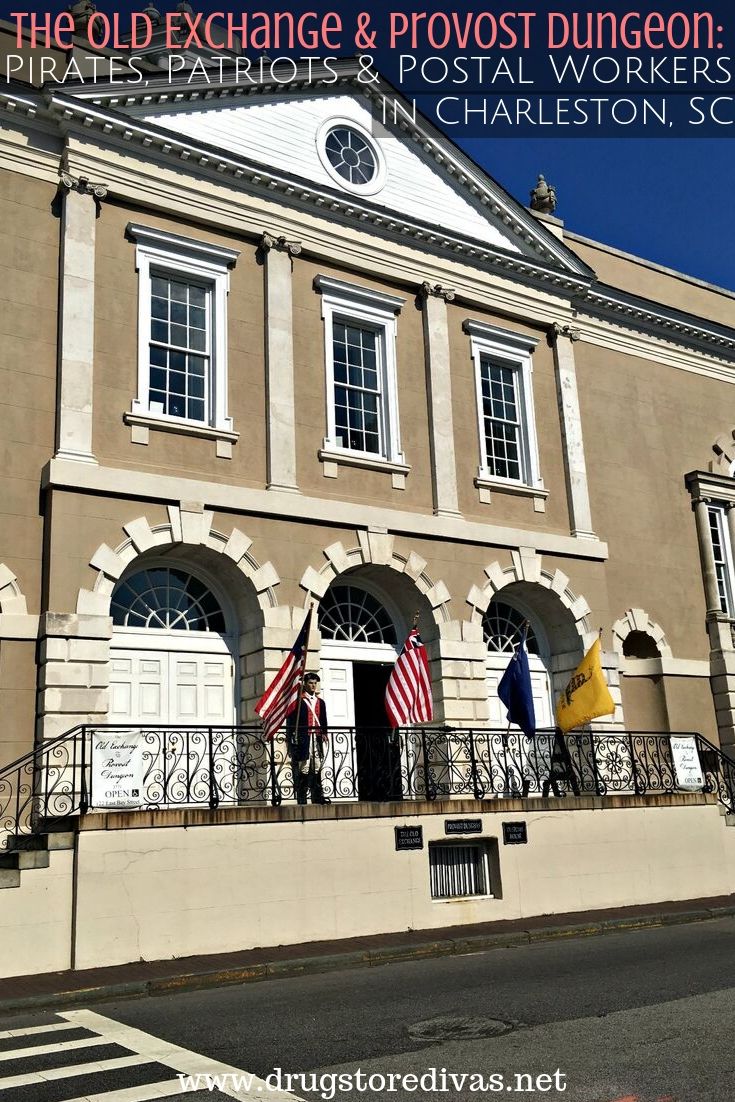 There’s a wave that’s come over our county lately where people just want to hide anything bad. People want to tear down any uncomfortable statues, reprimand anything negative in the past, and just try to make amends for everything. The Old Exchange & Provost Dungeon in Charleston, SC doesn’t do that.

It’s not apologetic for its history. Charleston, as a whole and according to our tour guide at the museum, has adopted the mentality of, “Yes, this is a Southern city. Yes, it was built on the back of slaves. No, we don’t agree with that now, but it is part of our history and we don’t hide from it.” 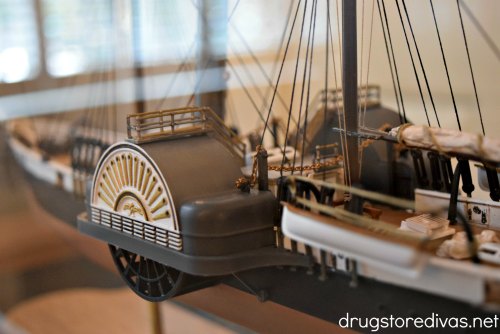 The Old Exchange & Provost Dungeon (122 East Bay Street) is one of two museums that I highly recommend if you’re in Charleston. The other is the Old Slave Mart Museum (6 Chalmers St).

Small aside about that one, since we haven’t done a full post on it yet …

The Old Slave Market Museum was, as its name states, an old slave market. I’m paraphrasing here, but it was created because it was a lot easier to sell slaves in one market at one time rather than multiple markets on multiple street corners.

This exact area is a museum now, so you can stand where the slaves stood, read historical facts like how slaves who ran away were branded to deter them from leaving again, see a list of prices, learn how market goers would ask leading questions to see if a slave was worth purchasing, etc. It’s so much more than you’ve ever learned in history class.

We went, not knowing what to expect, and were just blown away by the museum. We stayed so much longer than we expected to. If you get the chance to go to Charleston, do yourself a favor and spend at least an hour at The Old Slave Market Museum. 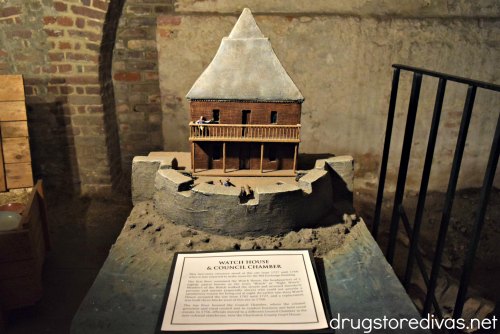 I bring this up because The Old Exchange & Provost Dungeon was Charleston’s most common spot of public slave auctions during the American Revolution and the Civil War.

The guides don’t shy away from this part of history, and that’s refreshing.

The Old Exchange & Provost Dungeon was more than just a slave market.

It was constructed in the late 1700’s and had a ton of functions before becoming a museum. 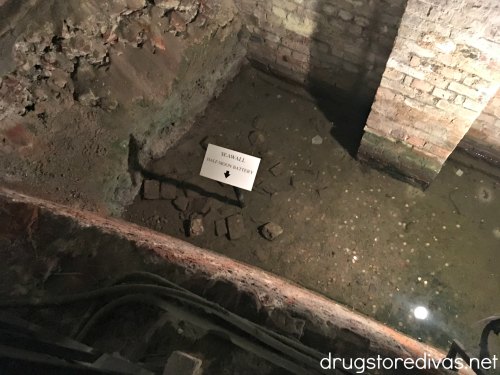 The museum is on Bay Street, which used to be the edge of Charleston. You can actually see the seawall and the Half-Moon Battery, where the city ended. Charleston is now two blocks longer … like two blocks built right out into the water.

As our tour guide told it, those extra two blocks are landfill … and partially pirates. Charleston, then known as Charles Town, was often attacked by pirates including the most famous: Blackbeard. He actually started an alliance of pirates and blocked the port of Charles Town.

Blackbeard escaped, but lots of pirates were captured, including Blackbeard’s friend, Stede Bonnet (known as the gentleman pirate). He was actually hanged in Charleston.

Not all pirates received a proper burial. I mean, they were criminals. So, when the town needed to create two extra blocks of land, those pirates came in handy. 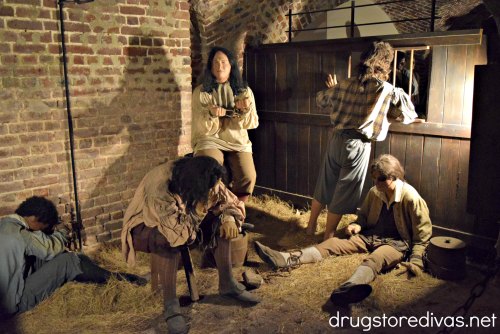 But if you’re into that, they say The Old Exchange & Provost Dungeon is one of the most haunted places in Charleston.

That’s because of the dungeon under the old exchange building. It served as a British prison during the Revolutionary War with Prisoners Of War, war criminals, and pirates were chained in the basement. Many died because of the not-so-great conditions and legend says their spirits remain in the building.

None haunted us during our tour, but there are a handful of figures in the basement, sort of reminding me of a theme park. Each depicts a different scene in The Old Exchange & Provost Dungeon’s history. But each looks a little too realistic for my liking. I wouldn’t be surprised at all to see one possessed by a spirit and come to life.

So, that’s all on the bottom floor of the three-floor museum.

The main floor, where you walk in, has a gift shop, two large rooms that you can self-tour before your guided-tour downstairs begins, and parts from when the building operated as a post office. Because yes, after the pirates and dungeon thing, it was a post office. Talk about multi-purpose. 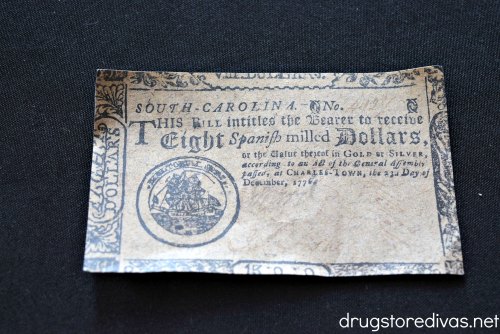 Upstairs was a traditional ballroom, where George Washington hosted parties for nearly 800 guests. Now, it’s broken into multiple rooms with pictures and plaques about the history of Charleston. When we were there, a guide was showing us old currency, weapons, and more. Other than that, though, upstairs is self-guided.

The museum is open from 9am to 5pm daily, with an entrance fee if you want to see anything other than the museum’s gift shop.

Have you been to The Old Exchange & Provost Dungeon? Let us know what you thought about it in the comments. 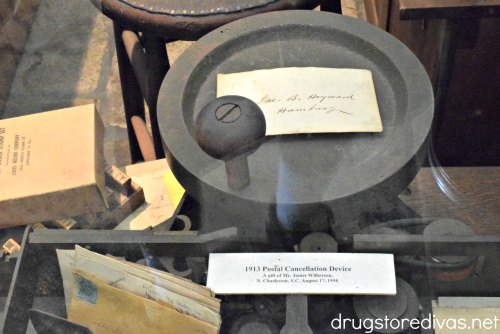 Planning a trip to Charleston? 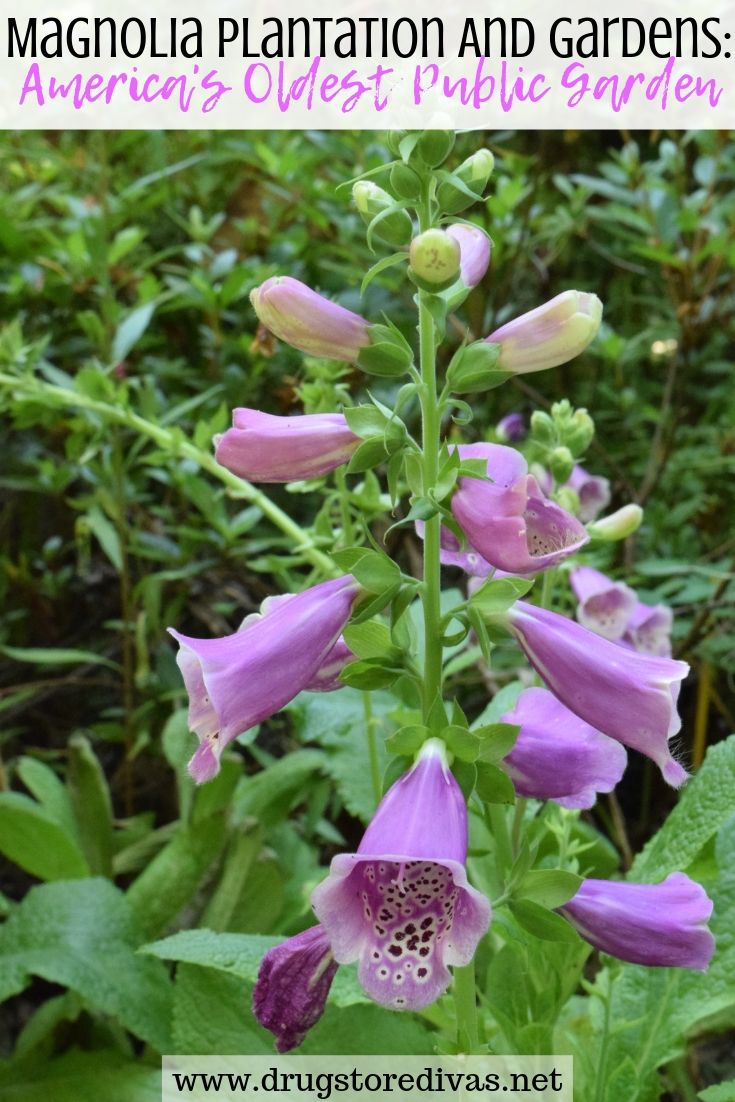 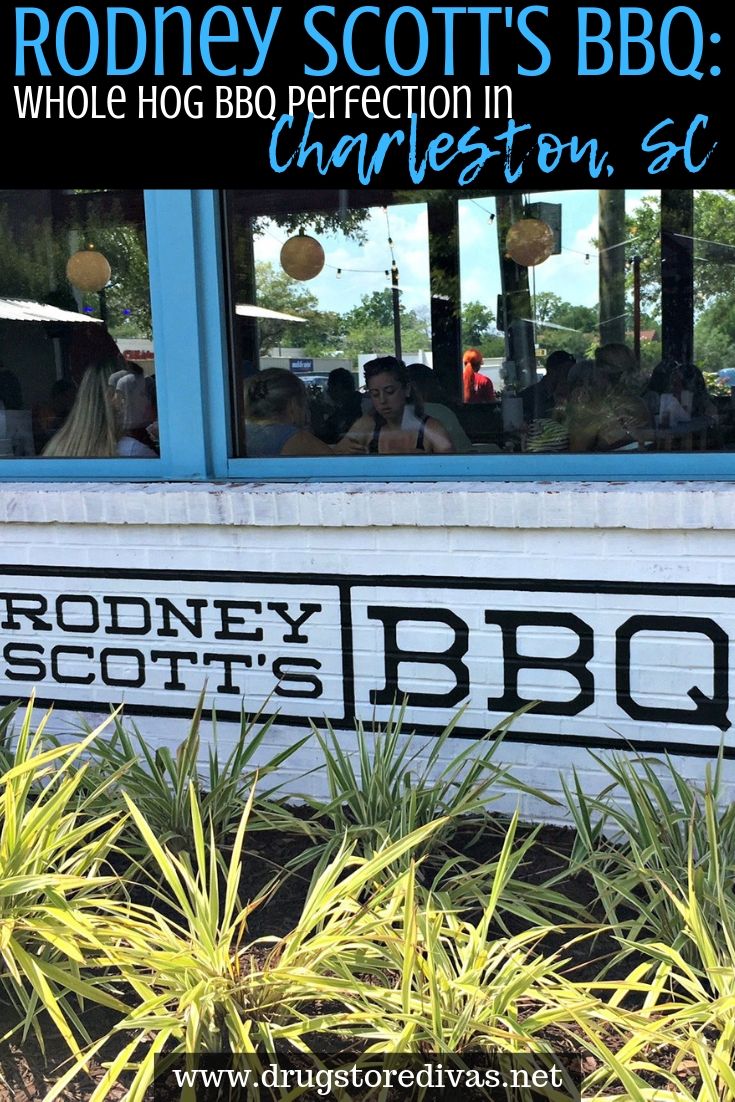 What an interesting place! So much history. My kids would love to check out a place like this

Now this is an adventure that will give us an exhilarating thrill for the knowledge of it. We love history. Sure it might be a bit creepy, but learning about the past is just so important.

My son would absolutely love this! He is such a huge history buff!

Oh, this place has a lot of story and history! I would love to learn everything about it and visit this museum!

Good read! I love posts filled with history like this one, and I really love that these museums strive to educate about these times of our histor rather than dismantle them. Definitely have to check this one out when we go to Charleston.