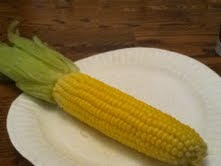 Tasty Tuesday is on Thursday this week because, well, that’s how we’re rolling. My excuse is that it’s still an alliteration either day, and I’m trying to see what day is a better fit. I’m leaning towards Thursday, but you let me know what you think is best.

This week, we’re making oven-baked corn. Now, I know, it’s easy enough to throw corn in a pot of boiling water. But that destroys the nutrients in the vegetable and cooks the flavor out of it. And since you’re eating for the nutrients, well, you’re defeating the purpose. So, instead, my boyfriend oven bakes his corn. That means, it basically steams inside the husk, preserving the nutrients and the flavor. Much better.

Corn is in season right now, so you’ll get the freshest corn now. But you can still end up with a couple duds. It happened to us — just check out that picture! — but my boyfriend was awesome and let me have the nice one while he had the dud.