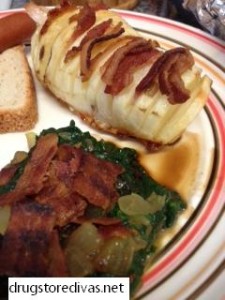 I love Waffle House. A lot. Mostly because I love their bacon. They make it using what I call a bacon iron. Okay, sure, that’s not the technical term for it, but it’s still the reason I love Waffle House bacon.

Did you know you can actually get a bacon iron for home use? Good Cook recently sent me the a bacon iron (okay, they call it the Good Cook cast iron grill press) with the challenge of creating some delicious bacon recipes.

I was on Pinterest the day before the grill press arrived and pinned a bacon potato photo. There wasn’t really a recipe, so I had to wing it. 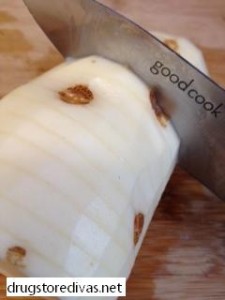 Peel the potato and chop it lengthwise. 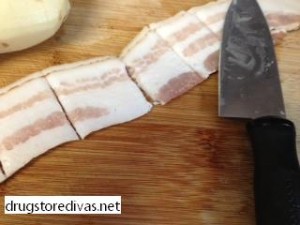 Cut bacon strips into 16ths (that will work out to one strip per medium potato). 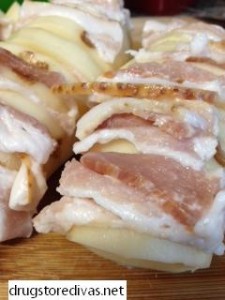 Stuff the bacon in the slices. 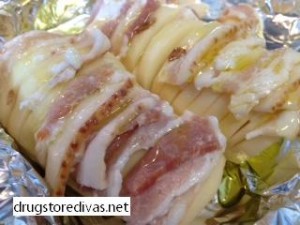 Put in a foil-lined cake pan and drizzle with olive oil. Bake at 400-degrees for 50 minutes.

While that’s cooking, it’s time to break out the cast iron grill and grill press. You may recognize the grill from our bacon and blue burger recipe.

I had bagged spinach that was in need of being cooked, so I asked on Drugstore Divas’ Facebook page for spinach recipes (since I had never wilted spinach before). I got a ton of great suggestions (you guys are awesome chefs) so I decided to go with a spinach, bacon, onion concoction. 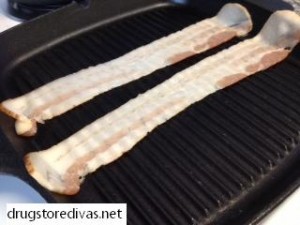 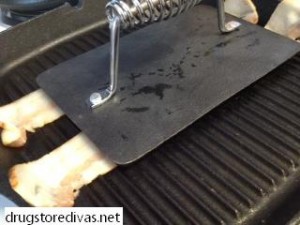 For someone like me who likes to constantly be flipping bacon, this method is not conducive. But for someone who likes the “set it and forget it” routine, this is great. I didn’t wait for the grill to heat up all the way before adding the bacon, so it took about 15 minutes to cook the strips on medium heat. 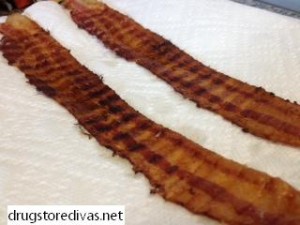 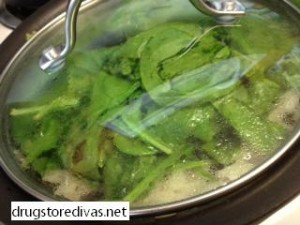 Saute onions in the bacon grease and add spinach on top to wilt it. 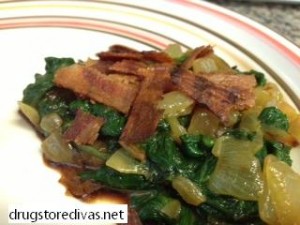 Plate the veggies, drizzle with balsamic, and top with crumbled bacon.