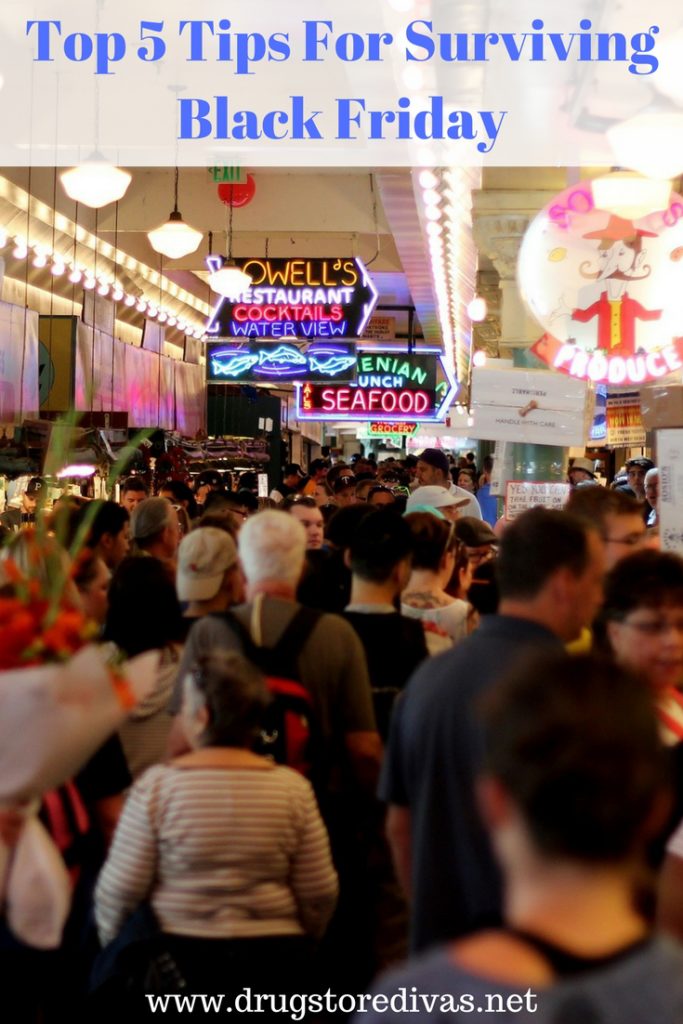 If you’re a professional Black Friday shopper, chances are you have a plan based on last year. And the year before. And the one before that. For the rest of you, let me share: I’ve been Black Friday shopping more times than I can count. Even the year that there was nothing on my list, I ended up stumbling over a Wii for someone else. I just like the thrill of it. Over the years, I’ve figured out a few things to make it easier. So, in no particular order, here are my Top Five Ways to Survive Black Friday.

1. Wear comfortable shoes.
Yes, heels are cute, and I’m sure DSW has a new pair or two you’ll end up buying on Black Friday. But, while you’re shopping, stick to something comfy. Flats, sneakers, you get the deal. You’ll be running from store to checkout line to car to the next store, and there’s no way you’re winning that race in stilettos.

2. Bring A Buddy.
The buddy system is something you’ve grown up with. You probably don’t ever go in a public restroom alone, so why would you try to tackle Black Friday shopping solo? If there’s something you want and your friend doesn’t need any items from that store, you run and get it and have her hop on line. Checkout will be so much quicker that way.

This works better if you know what you’re getting and don’t need a second opinion on color (go with black), size (smaller is better so you don’t have an excuse to eat all the Christmas cookies this year, or version (unrated for the husband, not the kiddies).

3. Man The Computer.
The year we got the best prices was the year we left my brother at home. We’d call him from the store and have him quickly search online for the unadvertised doorbusters. If he could find it online for cheaper, we’d head to the next store.

4. Be Friendly To Your Linemates.
Oh, I’ve seen my share of Black Friday takedowns over the years. You know who doesn’t ever get hurt? The friendly person waiting on line. Even if you don’t care that the guy in front of you met his girlfriend playing World of Warcraft and now he’s waiting outside Best Buy to get her a new computer monitor, pretend. Because if you happen to mention you’re looking for DVRs, and he happens to pass by the last spindle, chances are he’ll grab it for you.

5. Stash Some Snacks.
The worst thing you can do is shop on an empty stomach. If you do, you’ll be whining like a baby, get hangry, and leave before you snag all your deals. Put a couple homemade energy balls in your purse, a bottle of water, and maybe a little chocolate. You’ll have a little pick me up, and you’ll make it through the day. But try to avoid the fast food joints. Those lines will be longer than the ones for a flat screen.

My little reminder: The chance of you picking up everything on your list is slim. Maybe if you go on Wednesday and hid it all. And even that’s not a guarantee because it seems all Thanksgiving deals seem to have started the week before Thanksgiving. It’s nuts.

Realistically, if you’re heading out with Santa’s list on Black Friday, you’ll probably miss something. Someone else will beat you to the last video game, the sweater you were hemming and hawing about will be gone by the time you run back. That’s okay. Just go in knowing you’re going to try your best to get everything, and you shouldn’t beat yourself up if you miss that super cheap GPS.

I mean, there’s always next Black Friday … and you’ll know to get there an hour earlier next year.

You still have a week to prepare for this one, so check out all the current Black Friday ad scans and Black Friday wedding deals.