Drugstore Divas was provided the cakes for this Semi-Homemade Mini Ice Box Cakes post. Additional items and all thoughts and opinions belong to Drugstore Divas. I had never heard of an ice box cake until my friend brought it up recently. So the other day, when Pete and I were hanging out watching TV, I decided that I would make mini ice box cakes. I’m calling these semi-homemade mini ice box cakes because I assembled them at home. I didn’t bake a cake for these. You can, if you want, but I didn’t want a full cake lying around.

See, that’s the thing about being a household of two: you have to try and make mini versions of desserts. If I make a full tray of anything, Pete will have a few bites and I’ll have to finish the entire tray (because I don’t want it to go to waste). With bikini season around the corner, I can’t do that with desserts. 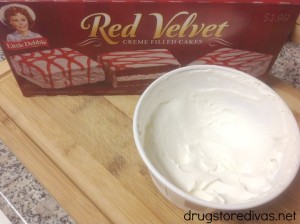 Leave the whipped topping out about an hour to melt. 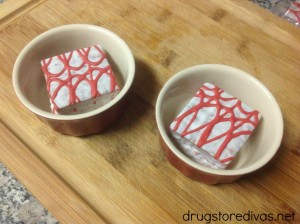 Put the snack cakes in the ramekins.

Top with the whipped topping. Make sure to get it down the sides between the cake and ramekin (the right cake illustrates this; the left cake it completed). 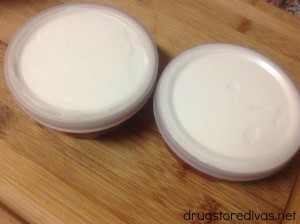 Put the lid on the ramekins and put in the freezer until the whipped topping refreezes. Serve cold.

I love the concept of a small portion because I eat too much when I get desserts in front of me! Thanks for linking up to Saucy Saturdays!

Sounds tasty! Thanks for linking up at the Weekend Blog Hop at My Flagstaff Home!

What a cute idea! Thanks.