Drugstore Divas was provided with Ole Smoky Moonshine for the purpose of this review. No money exchanged hands. 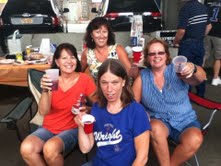 My family is one of those families that is routed in tradition. If we’re doing it, it’s because we’ve done it for the last 25 years. So, tailgating at a Mets game every year, yup, we’ve done it as long as I’ve been alive. And my mom, dubbed Cathy Cosmo, bringing her version of the drink, yup, as long as I can remember as well.

We went to our annual game last Saturday, but this year, instead of her concoction [[which is always clear with a splash of pink]] was made not with vodka but with Apple Pie Moonshine. Oh, this wasn’t stuff we brewed in our bathtub during prohibition; actually, it was Ole Smoky Moonshine, Tennessee’s first legal moonshine [[and this week’s Saturday Sample]].

I went to Gatlinburg, Tennessee when I was a kid [[part of our family tradition of camping every summer]], and we rode up a lift to the top of the Smoky Mountains. It’s here that the moonshine is made — okay, maybe not at the top of the mountain, but in the town. You’re actually able to take a distillary tour, in case heights aren’t your thing. If you want something a little closer to home, Ole Smoky Moonshine is actually being sold in select Sam’s Club stores. How cool is that? 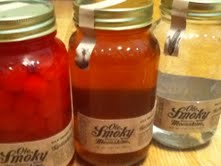 The brewmasters have three variants: Original Corn Whiskey, Apple Pie Moonshine, and White Lightning. The company sent me the first two, along with a mason jar filled with moonshine-drenched cherries. In the box with my lovely alcohol was a recipe list. The No So Cosmopolitan called for White Lightning, but Cathy Cosmo made do with the Apple Pie. It gave it a cinammon flavor, which was welcomed. It was really like drinking an apple pie. Bring this to your Thanksgiving dinner instead of traditional apple cider and you’ll be invited back next year. 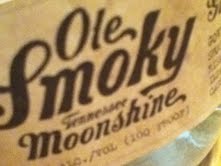 The cherry juice was added to the cosmo, which was a nice touch. But it abandoned a ton of cherries, left for the taking. I tried one, thinking it would be just another marishiano cherry. Oh no, it definitely tasted like it was swimming for months in alcohol [[which makes sense considering, well, it was]].

The only gripe we had was that the alcohol comes in Mason jars. Now, while that’s actually a really cool presentation, it doesn’t work in actuality. Imagine trying to pour yourself whiskey on the rocks. So you pick up the Mason jar of Original Corn Whiskey, attempt to pour, and more ends up on your tabletop than in your drink. So you need another vessel to get it out: a laddle, a dropper, something. Anything to get out a drop because, honestly, that’s all you need of the Original Corn Whiskey. It smells strong, like something your grandpa made in the bathtub. It’s pretty undrinkable straight, unless you’re in the mood to grow a little hair on your chest. We mixed a drop of the Corn Whiskey with a gallon of Crystal Light appletini mix [[okay, the proportions are exaggerated, but you get what I’m saying]] and it was still the strongest drink ever known to man [[that’s not exaggerated]]. It’s grainy and not for the weak of heart.

It’s awesome looking as far as packaging goes and the Apple Pie Moonshine and cherries are good to mix and give to anyone you know who drinks. The Original, well, that’s strong enough to strip paint. Try it wisely.