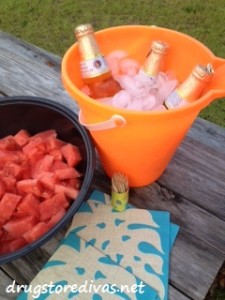 My mom came in from New York last week, and we had to celebrate her coming. So, on her first day, when she had been up and traveling since before 4am, we planned a tiki party. Truth be told, we didn’t realize that she had been up so early, but she was game.

I mean, who can turn down a tiki party?

I picked up everything for our perfect tiki party from Oriental Trading Company for less than $25. We were asked to do a review, and I decided we would come up with some sort of Summer Fun theme. I sat down with Pete’s almost four-year-old nephew, looking through the summer items. I was asking him what items he would like. He picked water guns and a spider ring toss game (which didn’t say summer to me) before we saw a Tiki Bean Bag Toss game. I decided that was the main focus of our party (especially since it looked good to me and him, so I knew it was a family-fun activity), then looked at Oriental Trading Co. to see what else I could pick up to build a party. 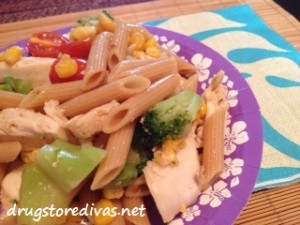 I found really cute Paradise party dessert plates and Island Breeze luncheon napkins that made our table look adorable. We made what the recipe calls “perfect pasta” for our party meal. It actually was pretty great. Pasta with grape tomatoes, broccoli, corn, and chicken with a dressing of honey, soy sauce, and sesame oil.

This was our dinner, even though I served it on dessert plates. I know, kinda silly but it actually was a great way to help with portion control. Yes, it’s a party, but it still wasn’t an excuse to overeat. Plus, look at the vibrant colors of the plates and napkins. Loved them. The colors were just so bright, which added a great feel to the party. The paper products really held up nicely, even though we did have a pasta with a sauce. I wasn’t worried about it soaking through the plate. 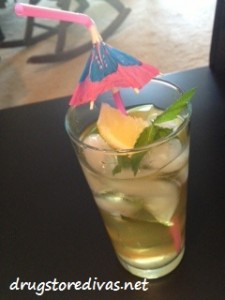 Pete used our party as an excuse to try out a new sangria recipe. It was filled with fruit and mint and a couple different liquors. He garnished it with mint … and I garnished it with a Hibiscus Parasol straw. I mean, what’s a tiki party without an umbrella in your drink.

This was so much better though because the umbrella straw actually functioned instead of just getting in your way when you’re trying to sip. What’s great is that the umbrellas actually do open. Just reach under and push up the cardboard to open it. Plus, if you give guests different colored straws and umbrellas, you can keep track of which drink belongs to each guest.

Now the only trouble you’ll have is keeping enough sangria in the pitcher.

After dinner, with drinks in hand, we headed down to our courtyard to finish the party. I definitely wanted to keep our theme, so I cut up watermelon and brought it down in a bowl. Pete picked up some Modello, which I stuck in a sand bucket (which I also got from Oriental Trading Co.). Sure, we could have used an ice bucket, but a sand bucket was so much more fun — and, how many chances do you get to use a sand bucket outside of the beach? 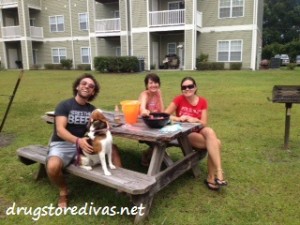 Once the party moved downstairs, that’s when the fun began. We set up the bean bag toss on the ground and tried to toss it that way. I got 15 points and no one else seemed to be hitting the target.

That’s when our neighbor walked by with her dog.

Do you want to try, we asked.

She immediately moved up the line that we had set. She didn’t get anything in, but she sure did a better job of hitting the tiki.

So we moved the line up and played a little more.

It got a little easier that way, but no one was going 5-for-5 with the bags. So my mom had an idea that we should move the game up onto the picnic table we were using. We moved the food down to one end and put the game on the other. 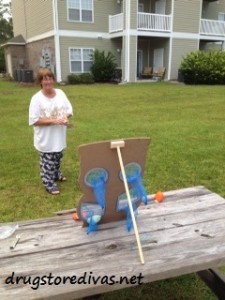 It did take a little adjusting, but we were able to get a little bit closer when it was higher.

Either way, though, we had such a good time outdoors. The best part of the game was that it actually did force us to go outside. Throwing bean bags indoors isn’t exactly something I would condone, so we had to move to the courtyard to do so. When we got there, we realized it was the first time that we had actually used that area of our complex. We’ve been outside to go to the pool or the mailbox, and I sometimes cut through the courtyard on the way back from those areas, but we never had gone downstairs with the intention of having a party at the picnic table.

Plus it gave my mom a chance to meet our neighbor, which was great.

Here in North Carolina, we still have about three more months of summer weather. Anywhere else, you still have at least a month left. So go. Enjoy it. Throw an impromptu party. Ours was definitely one of the highlights of the summer. I’m sure yours will be too.

Drugstore Divas received these items for this review. No other compensation was received. All thoughts, opinions, and photos are ours.

What a fun time you all had! I love the plates and the entire island theme! Oriental Trading has some of the best items for parties and decor!

I love those cute plates!! I need to order some for my next party

What great ideas! Thanks for reminding me to use the Oriental Trading Company when I need party stuff!!

This looks so awesome! I have always been a huge fan of Oriental Trading Company! I've been considering using them for some of my wedding things!