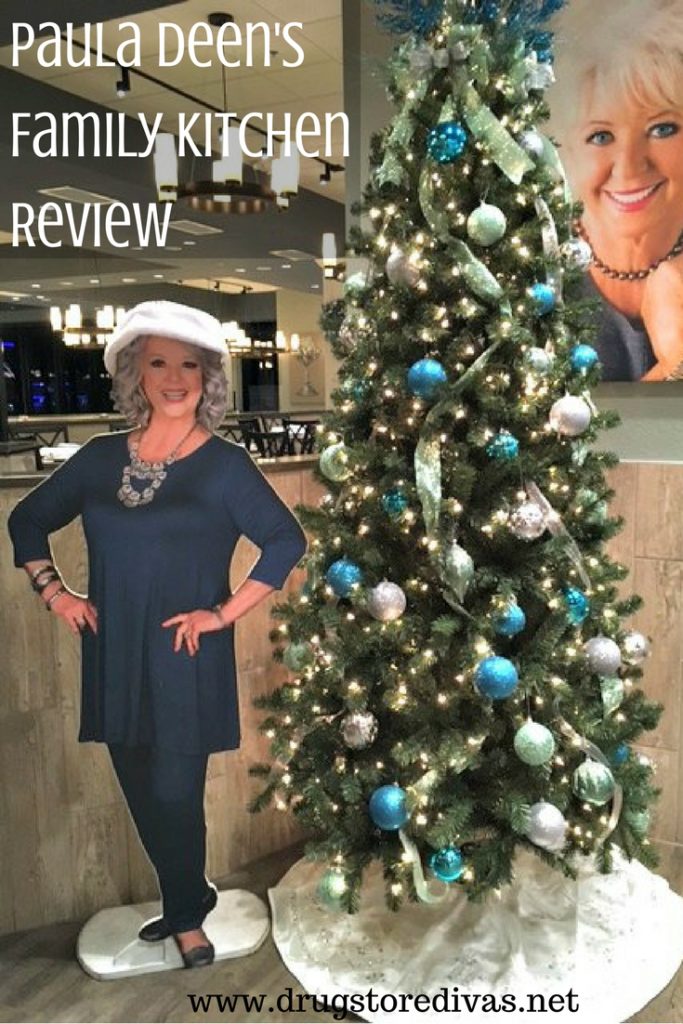 My mom and I were in Charleston earlier this week and decided to stop in Myrtle Beach for dinner and to check out some Christmas lights on the way back. I knew Broadway at the Beach would have a tree lit, so we decided to stop there. I was reading through the restaurants that were there, and we decided to try Paula Deen’s Family Kitchen. We had no idea what we were getting ourselves into, so I figured it might be a good idea to write a Paula Deen’s Family Kitchen review in case you’re planning on going.

Now, quick aside: We have no association with the restaurant. We just happened to go on our own and had a lot of opinions.

We walked in downstairs into a gift shop which has everything you want it to have. Spices, cake mixes, a baking dish that says Butter Makes It Better, and lots of people saying y’all.

The restaurant itself is upstairs, so up we went. We were seated quickly and then my mom excused herself to go to the bathroom, leaving me to look at the menu alone.

The restaurant is family style, which means you pay a flat rate per person (in our case it was $22.99; I’m not sure if the Paula Deen’s Family Kitchen in Pigeon Forge is different). You choose three entree items and four sides, all served in the center of the table out of communal bowls. You then each get a dessert. 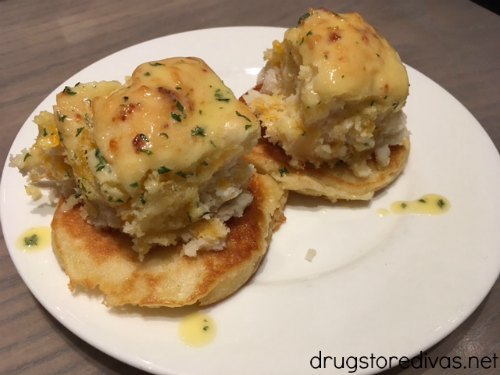 My mom came back to the table and I gave her the rundown. Before she had a chance to check over the menu, our waitress was bringing us an amazing cheesy biscuit on top of a mediocre corn muffin pancake. We didn’t want to waste any calories or stomach room on the pancake, but I was about ready to marry that biscuit. 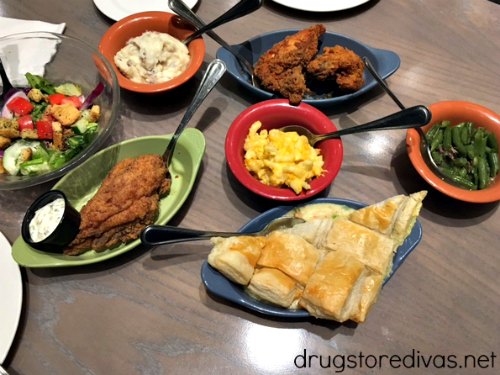 For our entrees, we ordered the Best Ever Southern Fried Chicken (that’s the name on the menu, not my commentary), the Georgia Fried Catfish, and the Chicken Pot Pie. The rest of the menu options were Ol’ Fashioned Southern Meatloaf, Chicken-Fried Pork Chop, Beef Pot Roast, and Spare Ribs.

The food all came at once in decent portions. When everything arrived, I got less nervous. The nerves? Oh, they were because you’re not allowed to take anything to go. Since you’re allowed unlimited refills on any of the food (and even the dessert), no to-go boxes are offered. I was so worried that we’d be served huge portions and leave so much food on the table. It just seemed so potentially wasteful.

I immediately went for the fried chicken since that was my top choice. I loved it. The breast was small enough that I could eat the entire piece, the chicken wasn’t juicy but also not too dry, and the skin was incredible. I should have ordered a second piece just for the breading. My mom, however, thought her thigh was very salty.

My mom’s favorite was the catfish. I loved that there were no bones in it, and she thought it was great.

We both decided the pot pie was a waste of a choice (and maybe we decided to blog this just to keep everyone away from the pot pie). It was just a lot of puffed pastry on top and hardly any filling underneath. And the filling that was there was lacking any sort of taste. And it was cold. So stay away. Far, far away.

The thing we realized, also, is a lot of the options are either fried or bread-heavy. And the biscuit you get to start is bread. That fills you up quicker than other options would, which is why although you’re allowed refills on your food, not many people ask for them. Our waitress said that it’s usually the teenage boys who ask for refills on the food and dessert, but not usually anyone else.

I was super excited about the mac and cheese when it came. It was delicious. When I went back for seconds, though, it had completely cooled down and was just so heavy that I didn’t even want to eat it. And mac and cheese is pretty much my favorite side dish, so that was a let down.

The potatoes weren’t as creamy as the waitress explained, and they were cold. That’s maybe the problem with serving so many options to so many guests. They can’t all hold the heat. You’d think Paula Deen would have invented some sort of stoneware to combat this and then decided to sell it in the market downstairs.

They do sell the dressing from the poppyseed salad, which my mom loved. It was a little sweet and that’s exactly how she likes her dressing. And if you like your green beans served with bits of shredded meat in them, you’ll like those.

Overall we were — like the food — lukewarm about the whole experience. That is, until dessert came.

We each ordered an Ooey Gooey Butter Cake: one chocolate, one vanilla. You. Guys. The vanilla cake had some crisp bottom that was heaven, and the chocolate was basically an oogy gooey thin brownie. It was the perfect ending bite to any meal.

Would we go back? Maybe if we had some hungry teenage boys visiting us. But probably not just me and my mom … unless we were going back to shop. That Butter Makes It Better pan and Ooey Gooey cake mix are calling me. And that biscuit. Paula got that right.

I have to say I do love Paula Deen so this would be right up my ally ;)