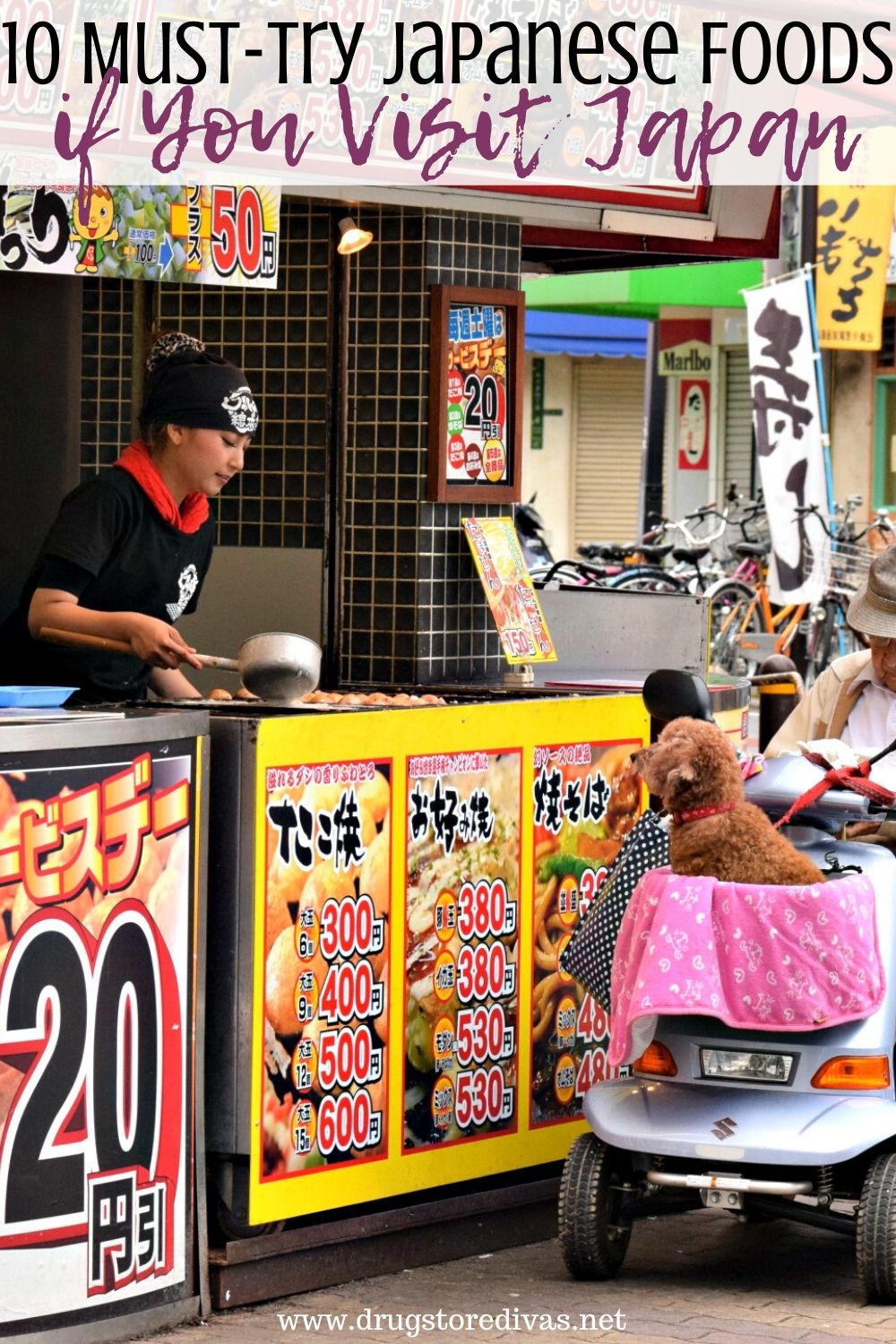 I have family in Japan, so I try to visit every handful of years. My grandma was one of eight children, and the only one to move to America (although she did try to get a few of her sisters to move here, they only ever came for visits). I was hoping that Pete and I would be able to visit in 2021, but now that the Tokyo Olympics have been moved from 2020 to 2021, I’m not sure how affordable it will be. If you’re planning on traveling to Japan, for the Olympics or just for fun, I put together a list of 10 foods to try when you visit Japan.

Because I’ll be honest. When I go to Japan, I want to see family, but I also want to eat. There are some things you just can’t get in America.

So of course, when we do visit family, they bring us to restaurant, cook for us at their homes, and don’t mind when I stop at so many street vendors to pick up delicious treats.

The majority of the spending money I bring with me is spent on snacks.

10 Foods To Try When You Visit Japan

This list really isn’t in any order, except for the number one spot because gyoza is my favorite thing to eat in Japan.

Also, I tried to pick foods that aren’t easily available in the United States. Most of the must-try street food in Japan just isn’t accessible here.

Some Japanese foods have made the crossover to the United States and you can find dupes of them in the grocery store, things like ramen and udon. I tried to make a Japanese foods list that included foods you may never have come across before this post. 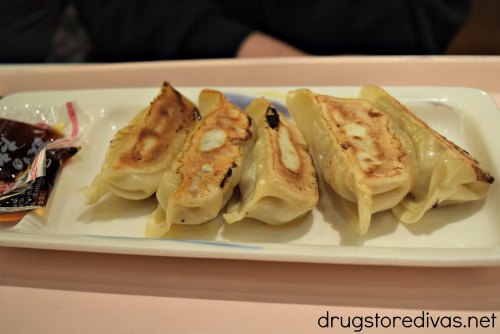 Once a month or so, I have a dream that I’m in an airport, leaving Japan. And I’m crying, “I can’t leave yet; I didn’t eat enough gyoza.” Last time we went to Japan, I ate it nine times in 14 days and that still didn’t feel like enough.

Gyoza is a Japanese version of a Chinese dumpling. Gyoza has a thin skin, filled with pork and vegetables, pan fried, then served with a soy sauce and rice vinegar dipping sauce. Gyoza is the perfect appetizer to ramen, or a side dish for yakimeshi (fried rice). 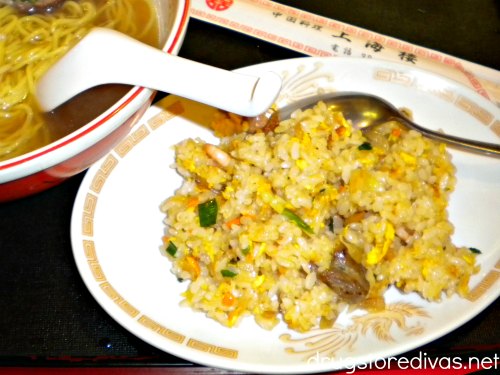 I started this saying this list wasn’t in order, but yakimeshi has to follow gyoza because they’re basically a package deal in my book. I always get them both together.

Yakimeshi is Chinese fried rice (known as chahan in China and yakimeshi in Japan) that is made in a Japanese style. Yakimeshi is not the fried rice you get in America. There’s no square carrots and no yellow rice. Yakimeshi is basically white rice (I toss a splash of soy sauce into mine for flavor) made from Japanese sticky rice, pan fried with chunks of pork, pieces of egg, and sometimes peas. 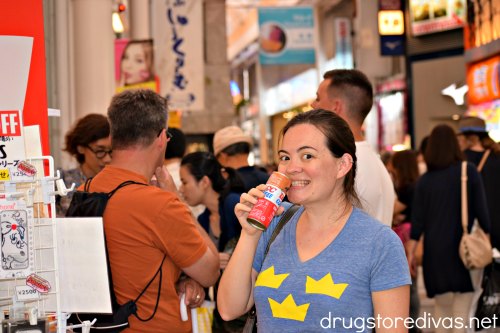 UCC Coffee is canned cold coffee. Not cold brew, like we have now in the US, because it has milk added. And it’s not iced because there’s no ice. It’s coffee, sweetened with milk added, and then served cold. It’s amazing and it’s like nothing we have in the states.

Let me talk to you about Japanese convenience stores for a minute. They’re amazing. The food you can get there is top notch, so much better than the meat on rollers in the US. There’s hot food that they actually will prepare for you, cheap but fresh packaged meals, and lots of snacks. So, when I’m out an hungry, I stop in a convenience store for korokke, which are Japanese potato croquettes.

Korokke are mashed potatoes, formed into a patty, covered in Panko (Japanese bread crumbs), then deep fried. You can sometimes get korokke with meat or vegetables mixed into the potatoes, and those are really good too. 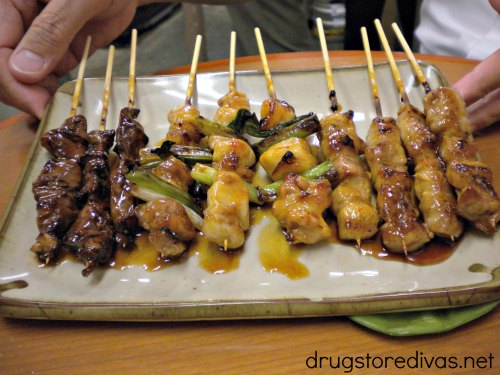 Except you can. Yakitori is basically chicken on a stick, grilled to perfection. I make it at home with white meat chicken because that’s my preference. But you can get dark meat, chicken skin, chicken liver, and more all skewered and grilled. You can go to a Yakitori House for it, order it at a bar or restaurant, or get it — my favorite way — as a street food. 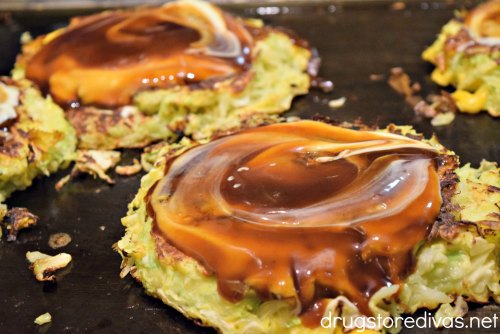 I’ve had bags of okonomiyaki flour sitting in our pantry for ages and I haven’t opened them because, despite making okonomiyaki in Japan, I actually have no idea how to make it at home. There are restaurants in Japan where you sit at a table with a hibachi grill in the center, then make your personal okonomiyaki. But there, I’m usually with a Japanese friend who helps me. Here, I’m the Japanese person.

Okonomiyaki is a savory Japanese cabbage pancake, made from okonomiyaki flour, cabbage, scallions, and fresh pork strips (that look like bacon). The fun of okonomiyaki is you can add as much or as little of each ingredient you like and make it to your preference. That’s literally it’s name. As I mentioned above, yaki means grilled. Okonomi means “how you like”, so okonomiyaki is literally: grilled how you like. 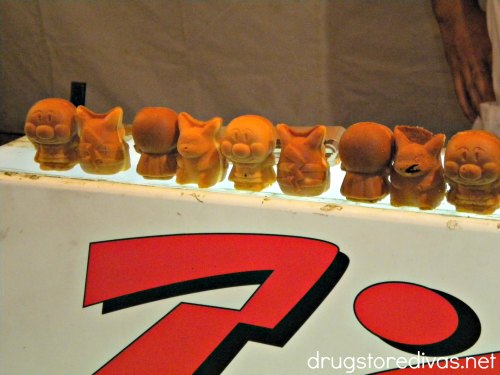 You guys. Bebi Kasutera are one of those things that I need in my life every time I go to Japan. My heart is not happy until I have a bag of these in my hands. The only place I find them is at yomise (a Japanese street fair), and there, you will see a bunch of stands making these delicious desserts.

These tiny dough balls are made in a long cast iron pan. Dough is poured into cavities, then the top of the pan is closed. The dough cooks, leaving a crisp outside and a soft inside, like a doughnut. Many are shaped as Japanese cartoon characters, like Anpanman, but you can just get plain oval shapes. I always get the cartoon characters because, like I said, these are very much to make my heart happy.

Think about a candied apple (ringo ame, in Japan). Those are cool, but the candy coating to apple ratio is off because you end up with bites of just fruit. Not with tanghulu. Tanghulu has the perfect ratio of candy coating to strawberry, plus you can enjoy it all as one, incredible, dream-creating bite. 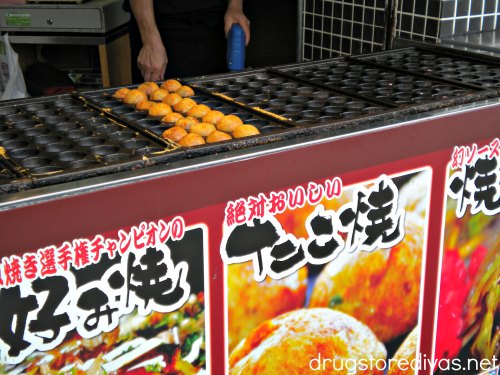 This one is not for me. No. Thank. You. I don’t do takoyaki. But I did make Pete eat it when we were in Japan. And almost everyone in my family loves it. So this list would have a huge hole in it if I left out takoyaki.

As you know by now, yaki means grilled. Tako, well, is octopus. So this is grilled octopus but takoyaki is a piece of octopus in the center of a dough ball that’s cooked on a cast iron skillet similar to bebi kasutera. But takoyaki is always round dough balls, never cute cartoons like Pokemon. 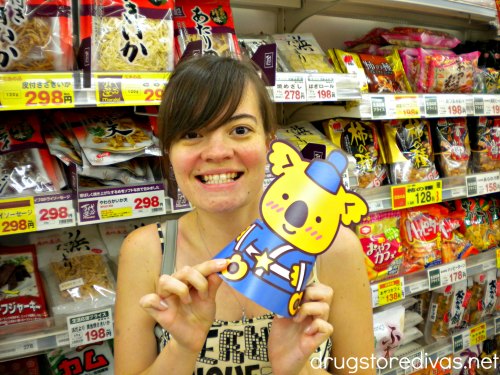 Koara no Māchi are my favorite Japanese treat. They’re thin biscuits filled with chocolate. The first time I was in Japan, I bought a box of them every single day. I was 17 and could get away with the calories. Plus, we walk so much every time we’re in Japan, it’s impossible to gain weight no matter how much you endulge.

You can get a box of Koara no Māchi in the United States. They’re called Koala’s March here, and they are the same tasty treats that you get in Japan. But, the stores that carry them here are so far and few between, so I fill half my carry on with boxes of Koara no Māchi before boarding the flight home from Japan.