Warner Bros. sponsored this Life Of The Party Movie Review. 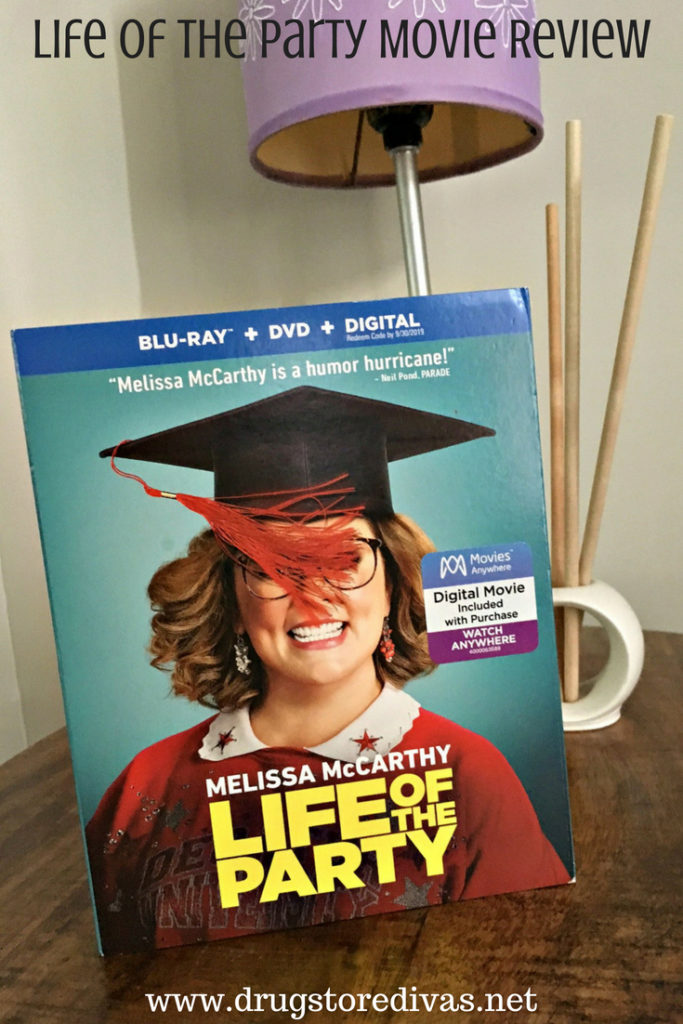 Pete’s dad and his girlfriend came to visit earlier this month. On one of the days they were here, Pete and his dad went to the movies. So his dad’s girlfriend, my mom, and I had an at-home movie night. We decided to watch Life of the Party — and it was a great choice.

The movie is about Deanna Miles (Melissa McCarthy, Gilmore Girls, Mike & Molly, SNL) who, minutes into the movie, gets told by her husband Dan (Veep‘s Matt Walsh) that he wants a divorce.

She’s a stereotypical middle aged woman from a generation ago. She didn’t finish college, exchanged her dream of a career for her dream of being a mom and housewife. That was okay with her. You never for one second feel that she really felt anything but happiness for being a stay-at-home mom.

She does say, at one point, to her senior-in-college daughter Maddie (Molly Gordon, I Am Sam): I don’t regret staying at home and being your mom, but I regret not getting my degree.

The main plot of the movie is Deanna setting out to remedy the latter.

She re-enrolls at her alma mater, which just happens to be where Maddie goes. She moves on campus because her husband was a little bit awful when they bought their house and only put his name on the deed. So now she’s a 40-something-year-old, unemployed woman who is also homeless.

So to the dorms she goes with lots of school paraphernalia, archaeology books, and determination. She lives with her sort of goth and always tired roommate, Lenore (SNL‘s Heidi Gardner) who is mostly a throwaway character but also kind of fantastic.

And that’s part of why this movie works so well. There are the main characters, Deanna and Maddie, and then the supporting cast, Maddie’s sorority sisters and Deanna’s friend Christine (another SNL actress Maya Rudolph), and there are the “handful of scene” characters like Gardner’s Lenore and Insatiable‘s Debby Ryan’s Jennifer who is the typical mean girl. Each character has a ton of personality and is meaningful to the plot.

(Side note: I actually like Ryan’s character so much that I binge watched Insatiable on Netflix in two days. Had I never watched Life Of The Party, I never would have given Insatiable a chance.)

And that you don’t see a lot in movies. You sometimes have filler characters who are just there for a scene for no good reason. But even the in-one-scene-then-gone Uber drive (played by McCarthy’s IRL husband Ben Falcone) moves the plot forward in a very funny way.

The entire movie is really funny.

It’s not your typical older person goes back to college film. It’s not your typical mother/daughter movie. Life Of The Party is a very funny, laugh out loud until you cry, movie with some very funny slapstick that McCarthy is known for (don’t blink while Deanna is throwing away Dan’s stuff because you will miss one of my mom’s favorite parts).

I can’t give you any more plot than that because it will ruin the movie. And I don’t want to ruin this for you. Instead, I just want you to go out and watch Life Of The Party right now. Watch it with your mom or your girlfriends or your husband or just by yourself. There’s no one who won’t absolutely love this movie. Trust me.

Check out the Life Of The Party trailer below, then pick up the movie, out now on Amazon here.

Have you seen Life Of The Party? Leave a comment below to let us know your favorite part!

I'm looking forward to seeing this. It looks pretty funny.