This iRestore Laser Hair Growth System post is sponsored and written by Pete. All thoughts and opinions belong to Drugstore Divas. 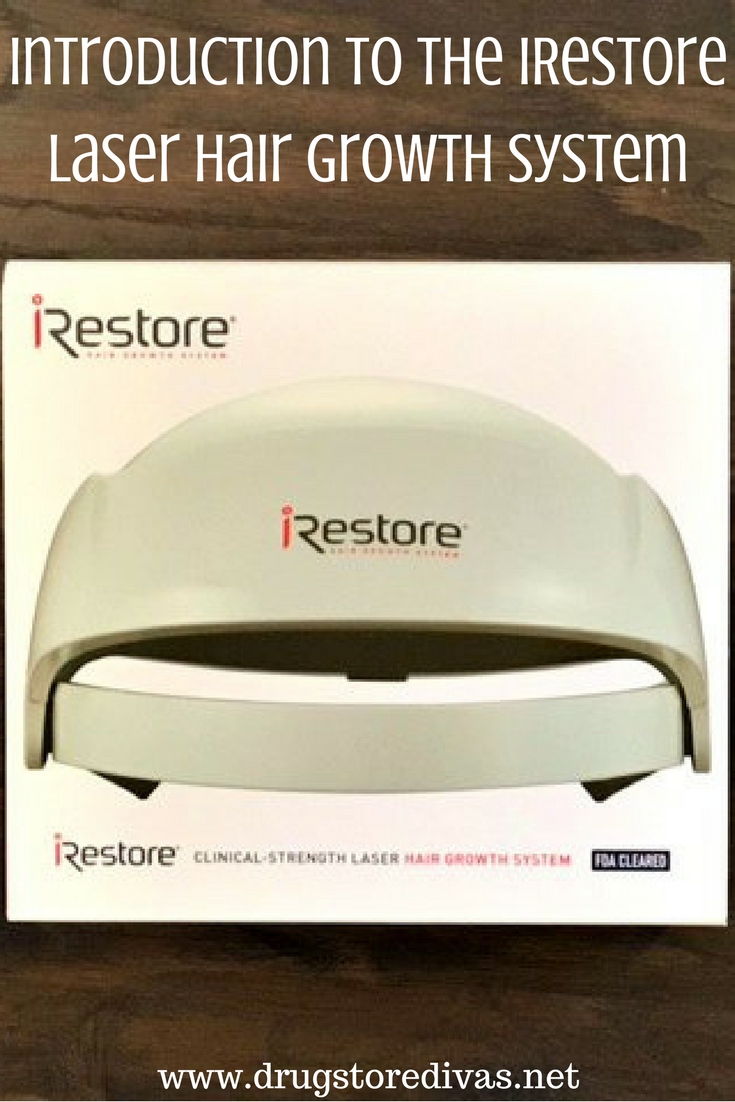 I remember the day I found out my greatest fear had started to become real.

I suppose it took me a long time to realize for two reasons: 1. People in general don’t see (or believe) things they don’t want to, and 2. How often do you see yourself from behind?

It took a friend of mine to break the news to me. At first I didn’t believe him and had an excuse ready to tell myself: That’s just the way my hair grows, it’s like a cowlick or something. Then one day I was watching a recording of a band performance I was in. At one point I turned my back to the camera to adjust my amplifier and there it was, the horrible truth, my greatest fear up there on the screen: I had a bald spot, a terrible one.

I didn’t believe it at first and told myself it was just the lighting. But it wasn’t. There was no hiding from the truth anymore. I turned off the video and never watched it again. To compound the feeling of dread that had hit me was regret, regret over the fact that had I confronted this truth earlier, maybe I could have gotten a head start on reversing it.

I researched obsessively. I went to my doctor and asked her for a prescription for Propecia. She highly advised me against that. So I didn’t do it. Transplants are incredibly expensive. I tried minoxidil (foam AND liquid), as well as nutritional supplements, for years. None of them reversed the problem or even remedied it slightly. What they did was merely stop it from getting worse.

It made me extremely sad. I felt defeated and just accepted the fact that this was just how it was going to be. And that’s where I’ve been … until I read about the iRestore Laser Hair Growth System in Popular Science magazine. I was overjoyed. There was hope. 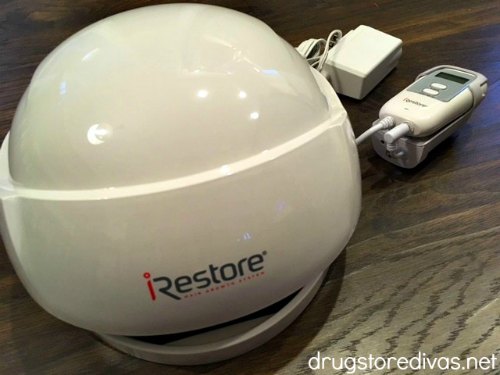 When I was offered a chance to try the iRestore Laser Hair Growth System and complete a one-year iRestore review, I immediately told Lisa yes. I said, “If it works, even somewhat, you have no idea how much of a boost of joy that would give me.”

A few weeks later, we received the iRestore Laser Hair Growth System (the “helmet”), the Rechargeable Battery Pack with Belt Clip, and a one-month supply of the Hair Growth Shampoo, 3-in-1 Hair Growth Formula, and Hair Growth Serum. 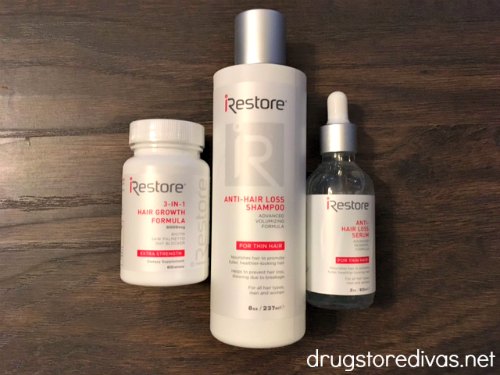 It’s recommended that you use the shampoo daily for best results. I usually only use shampoo every other day, but I began using this daily. The shampoo is great too. I like the smell and how it leaves my hair feeling and looking healthier and fuller.

The 3-in-1 Hair Growth Formula is tablet I take twice daily. I take one in the morning and another at night. It is formulated with biotin, saw palmetto, and a DHT blocker blend. Before this review, I had been taking a saw palmetto tablet, so I exchanged that for this product.

I use the serum twice a day, in the morning when I wake up before I go to work and once after I shower at night. I don’t shower in the morning so I just rub it in before I brush my hair. You apply it directly to the spot that’s balding and massage it in. It is meant to stimulate growth of thicker, fuller hair.

Every other day, I use the helmet after I work out. You put it on and set the timer for 25 minutes. There is a start and stop button, if you need to pause the treatment for any reason. After the 25 minutes, the lasers will turn themselves off. The contact points are a little unsteady, and the helmet slides down easily on my head, so you’re limited to what you can do while you’re wearing it. After I use the helmet, I’ll shower with the shampoo, then apply the serum after I get out of the shower. 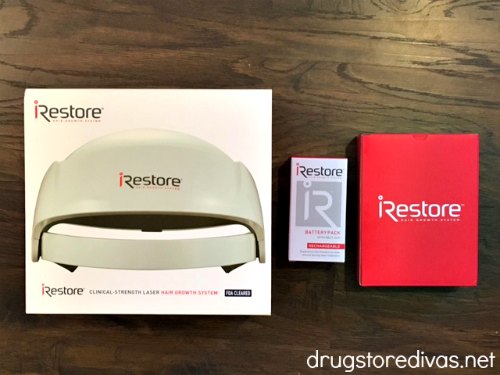 According to iRestore’s website, visible results from low-level light therapy begins within 3 to 6 months of continued use. The site says you can expect to see a slowdown in hair loss in the first 2 to 4 months.

Since this is just my first full month of use, you will just have to continue with me on this journey to see my results. 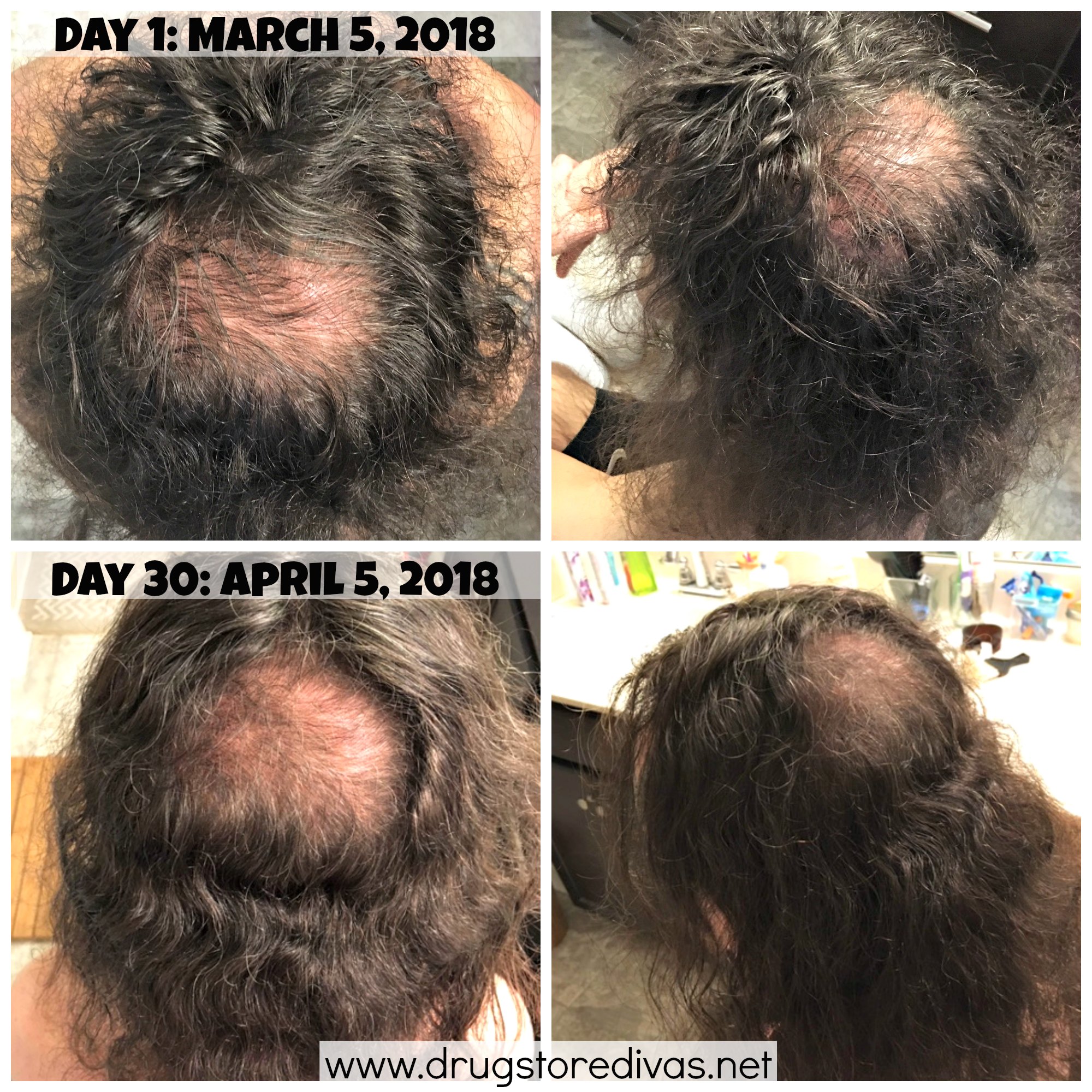 If you have used the iRestore Laser Hair Growth System, please leave us a comment about it below. And if you haven’t started yet, now is the time to do it. If you would like to start your hair growth journey with me, make sure to take advantage of this amazing offer especially for our followers: Use our special code DSD150 to get $150 off your iRestore Laser System purchase HERE.

If you’re on the fence about it, don’t be. With the 6-month money back guarantee for the iRestore, there’s really no reason to not try the iRestore for yourself. If you aren’t 100% satisfied for any reason within the first 90 days, contact Freedom Laser Therapy t