Drugstore Divas was provided the mentioned items below for this review. Additional items were purchased separately and not compensated. All thoughts and opinions belong to Drugstore Divas. 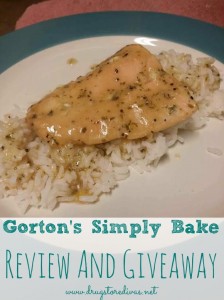 Pete likes fish, so when I Gorton asked if we wanted to review the new Gorton’s Simply Bake items, I asked Pete. He said yes, for sure, although we had never heard of the new Gorton’s Simply Bake line. We’ve reviewed Gorton’s products before, so we knew to find them in the frozen aisle. But wow, there was such a wide assortment of products in Harris Teeter. We found grilled items, crispy breaded items, beer battered fish, fillets, sandwiches, sticks … there was a lot.

Luckily, Gorton asked us to check out the Simple Bake items, so we only had to choose from tilapia and salmon. We actually ended up grabbing one of each because it was easier. I was sort of surprised to see only two pieces in each package, especially since Harris Teeter was selling these for $9.39 a box.

I know fish is generally pricey, but that seemed like a lot to me. I was glad that Gorton’s sent us coupons to try these out for free. I mean, at over $4.50 per piece of fish, well, that’s an investment and leap of faith.

We got home that night — so this is after working full days, then going grocery shopping — and decided that we would cook the Gorton’s Simply Bake. We made some rice and edamame, and then opened the fish. 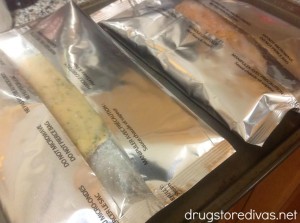 Each piece was individually packed in it’s own bag. The directions were simple: place the bagged fish on a cookie sheet and bake. The salmon was supposed to cook a little less than the tilapia, but I left them both in for the same amount of time (the minimum of the tilapia’s time, which was just two or so minutes longer than the maximum time for the salmon). I guess I could have put the tilapia in for two minutes first, then added the salmon to the sheet, but I was going for convenience here. 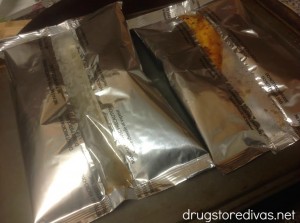 When I took them out of the oven, the bags had puffed up and the frozen pieces of fish were now swimming in some juice that hadn’t been noticeable before. I was actually pretty impressed because I thought it was just going to be a dry piece of fish. 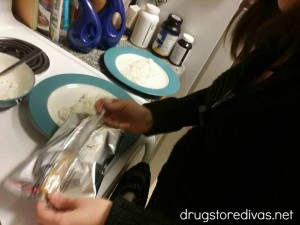 I spooned some rice onto the plate, then pulled the fish from the bag with a fork. The salmon came out in one piece, but the tilapia sort of fell apart. It didn’t matter since we were eating it anyway, but it just made for a less than pretty picture. 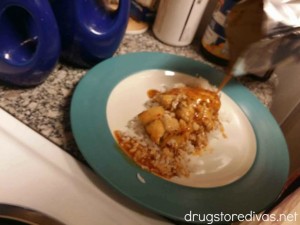 After I placed the fish onto the rice, I poured the juice on top. 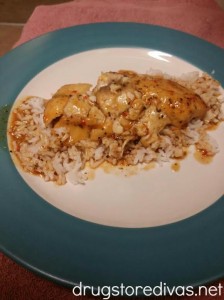 I had the tilapia and Pete had the salmon, although he ended up finishing mine too because I’m not the biggest fish eater so half was enough for me. But that was because of my taste buds, not because of the Gorton’s Simply Bake. We were actually surprised with them. We didn’t expect too much, but we actually ended up with two perfectly cooked pieces of moist fish. Plus, this was such a gourmet weeknight dinner. All we did was set it in the oven and wait for the timer to beep. That’s it. Twenty minutes later, dinner was on the table. It’s like a weekend dinner you can have any day. The price was a little high for me if you were thinking about feeding a family, especially one with teenagers, but these are great if you can catch them on sale. And you can also pair them with this coupon.

I like to cook crappies after they are fileted. They are mild and very good.

I love to cook salmon.

My favorite fish to cook is Orange Roughy

I love to cook salmon, that's my favorite.