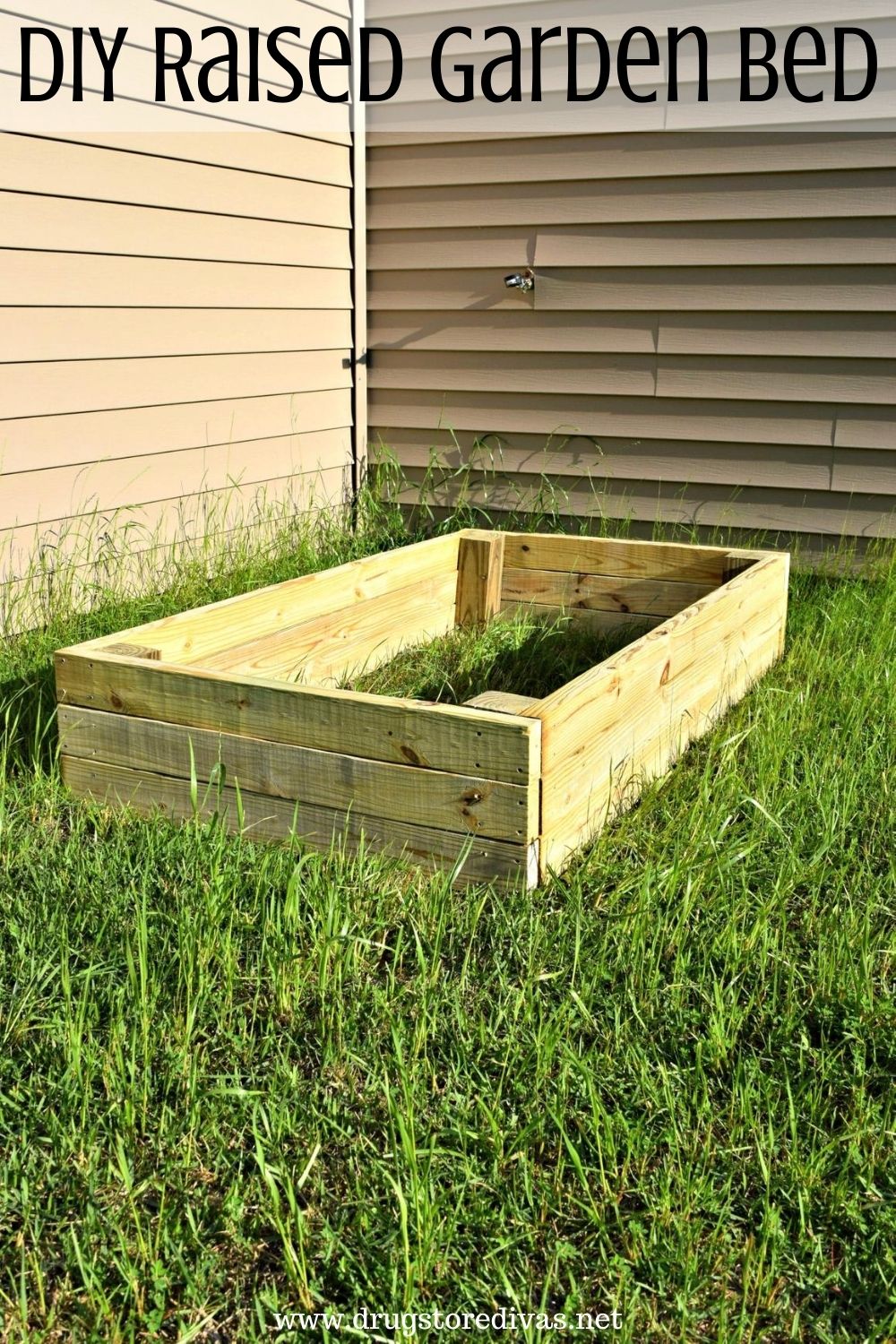 When we lived in our apartment, we lived on the third floor of the building. We had a beautiful porch that got really nice sunlight. Plus, we lived on the corner of the building, so we were able to get sun from two sides. It was the perfect spot for a container garden. But when we moved to our house, we wanted to expand. So Pete made a DIY Raised Garden Bed for me.

The square is just for our tomatoes to keep them from taking over the rest of our garden. The rectangle raised garden bed is where we put peppers, kale, eggplant, etc. It’s perfect for vegetables that grow up, not out. It wouldn’t be ideal for a vegetable that grows on a vine, like squash.

We did also grow herbs in our raised garden bed, and the oregano completely took over a large portion of the box. Strawberries will do that as well. Given the room, herbs and berries (and certain flowers like Mexican petunias) will just grow out of control.

Go to the hardware store and pick up your wood. Make sure you are buying cedar lumber, not pressure treated lumber. It’s not safe to use treated lumber to grow vegetables.

If you have a table saw at home, you can bring home the gigantic pieces that the hardware store sells and cut them to size at home.

If you don’t have a table saw (or the desire to cut wood), the hardware store will actually cut it down to size for you. It’s easier to put drive it home that way too.

The 4×4 pieces are going to be your posts. The 2×4 boards will be your sides. We’ll be referring to these as posts, longer sides, and shorter sides from now on, just to make it a little easier. 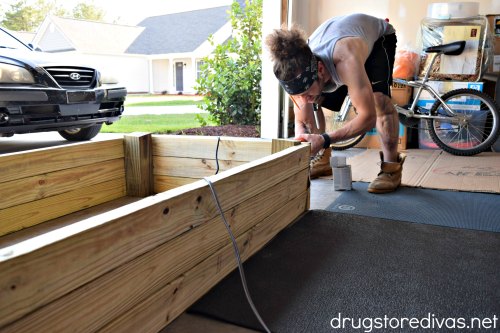 Take a longer side, make it flush with the bottom and one end of the post, then use the drill to screw in two deck screws, vertically and equally spaced.

At the other end of long side, place another post. Again, make that post flush with the end of the long side, and screw in two deck screws.

Repeat those last two steps to make the second side. Set those two sides 35 inches apart.

On both sides, screw two deck screws where the two sides meet, then another two where the shorter side and post meet (for a total of eight screws).

Repeat on the opposite side so now you have four sides. 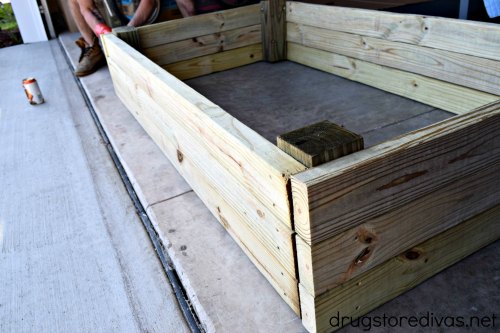 Add two more rows of side pieces so each side becomes three boards of wood high.

Don’t worry that there is an inch and a half extra on the posts. You need that.

Take the raised garden bed outside and flip it over, so the extra pieces of post go into the ground. That will make it stay put.

Use the hammer to gently tap the posts into the ground to secure the raised garden bed.

Fill with potting soil (to yield the best results) or dirt.

We used seven large bags of potting soil to fill the raised garden bed initially. We did fill it to the top, but rain and the elements will pack it down.

Every year, remove any roots left behind by dead plants, pull any weeds that have grown, and add additional bags of potting soil as needed. 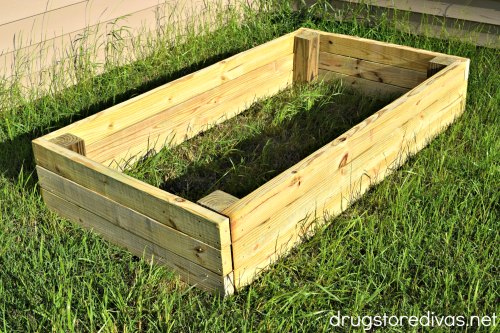 We love our raised garden bed. Pete actually spent time this summer extending ours because I love it so much.

There are a lot of benefits of raised garden beds that in-ground gardens don’t have. I listed my top five.

With a raised garden bed, the soil is warmer sooner because it doesn’t have the ground to cool it down as much. So you can plant sooner — and keep the plants longer. Your growing season is longer, which means your garden should yield more crop.

The chances that someone will walk in your garden and trample your plants is a lot less with a raised garden bed versus an in-ground garden. And honestly, either way, people shouldn’t be having dance parties in your garden. Although, as I typed that, I want you to invite me to your garden party.

Walking in the garden means you have a chance of stepping on plants, yes, but it’s more about the fact that your footsteps are compacting the soil. It’s harder for plant roots to grow in compacted soil, and harder for plants to sprout through it.

The good thing about our raised garden bed is that there are less weeds. There are still some weeds in ours that sneak through, but for the most part, there aren’t any. In my parents’ in ground garden, there are so many weeds because the soil is at ground level. There’s no barrier for the weeds to grow through.

4. You use less water

When you have an in ground garden, so much of the water and nutrients are distributed to the rest of the ground. So you have to use more water and food to accomplish the same amount of benefit. In the long run, that will cost you more.

We get so much rain here in North Carolina. We had a hurricane earlier in the week, which brought so much rain, and then a flash flooding warning yesterday. So you can only imagine how much water that brings to the garden. When it rains, I always say, “At least it’s good for the plants.” But sometimes, it rains for weeks at a time, and that’s not good for the plants.

– How To Grow Potatoes
– How To Prune Your Garden
– Tomato Caterpillars: What The Are And How To Get Rid Of Them

So creative. Thank you for sharing.