This week has been really hectic here at DDHQ. We had family in town, then it was Black Friday, and Cyber Monday where my booty was growing roots into my computer chair. It’s been chaos and Pete has been really great through it all. He’s been cleaning the kitchen, cut up everything for our butternut squash soup for Thanksgiving, and just taking care of everything that I can’t get to because this is the time of year when I barely turn my head from the laptop.

So I wanted to take a minute to do something special for him as a thank you for him being so understanding (because from now until the end of the year, it really is hard to be married to a blogger).

He loves brownies, so I wanted to try to bake him blondies (they’re basically light brownies, if you’ve never had them before). Since Thanksgiving is over all our family is gone, though, I wanted to make a half batch. But a half batch of blondies doesn’t exactly fit in a tray. So I had a brilliant idea. I’d make blondie bites in the mini muffin tin!

I was sent over SPLENDA® for review. The type we got is the Brown Sugar Blend. It’s a mix of Splenda brand sweetener and brown sugar. So I decided to try that in the SPLENDA® Sweet Swaps™ Recipe for blondies. You can find the original recipe here.

Blondie Bites made with SPLENDA® 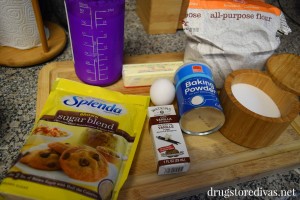 * The full recipe calls for one full egg, so the half recipe probably could have used a half egg, but that’s weird so I added a whole one 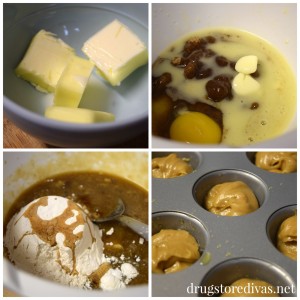 Put the butter and milk in a microwavable bowl and nuke it for 30 seconds. Stir until it is basically all liquid.

Add the liquid to the egg and brown sugar. Combine.

Fill the mini muffin pan with the mixture.

Bake for about 15 minutes until a toothpick comes out clean.

They came out really great. I love that they are bite sized so you can get a little bit of sweetness without worrying about how much you are eating (especially after Thanksgiving!). Using the SPLENDA® blend is great too because you use less than you would if you were using straight brown sugar. The back of the SPLENDA® bag gives you conversions, in case you want to incorporate it into your other recipes. You can substitute it for brown sugar by using the chart (or just splitting the brown sugar in half. For every cup of brown sugar you would use, you’ll use a half cup of the SPLENDA® Brown Sugar Blend.