We are quickly falling in love with the Skillet line of products. We tried out the Skillet bacon sauce and were in love.

So, when the opportunity came up to try the Chipotle Pumpkin Sauce by Skillet, you better believe we were all over that.

We made french fries with this last time, so we figured we’d stay in the potato vein and make hash browns. By that, I mean, Pete made hash browns. I merely supervised. 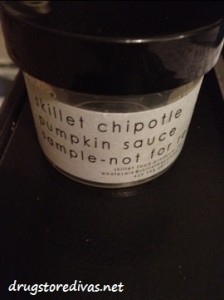 Shred the potatoes on a mandolin.

Soak the potatoes in water.

In a separate bowl, mix the Skillet Chipotle Pumpkin Sauce and oil. This stuff is pretty thick when you scoop it out, so you’re going to want to thin it out with oil so it’s no potent and goes further. If not, you’ll be using a full 2 oz. on one potato.

It was really that simple, just took a while. The pumpkin sauce was sweet and a great compliment to the starchiness of the potatoes.

We’re really in love with this line. The only gripe I have is that the samples I’ve been sent are not full size. They’ve only been about 2 oz. So you can really only use it about twice before you’re done. There were so many things I would have liked to incorporate the sauce into but didn’t get a chance.