As I think you’ve realized by now, I’ve been getting the opportunity to work very closely with Good Cook. It’s been fantastic so far. It’s really increased by involvement in the kitchen, especially because we finally have the tools in the kitchen that I need to cook.

Pete, he’s completely inventive. He can open the cabinet and make a meal, no matter what groceries we have. And he can completely improvise with cooking tools too.

Me, I need the right tools and the right ingredients. And even then, my cooking is questionable.

Like this, for example. I set out to make garlic knots. But the dough was so sticky that I couldn’t deal with actually knotting it. So I turned them into balls. Which flattened when I added the topping, so they turned into biscuits. And those tasted exactly like Red Lobster Cheddar Bay Biscuits, but without the cheddar.

So that’s what they are. 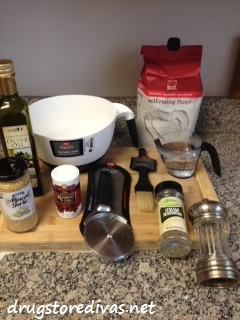 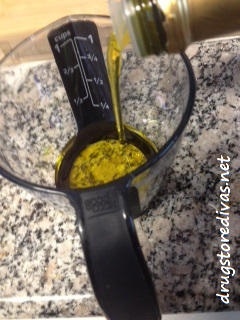 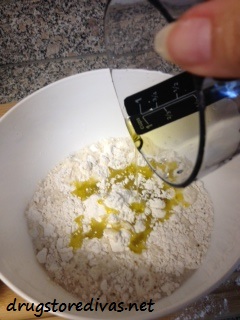 Combine them in a bowl.

I used the “Measure from Above” 3pc measuring cup set to measure, and let me tell you, it was the most enjoyable experience. “These are the best measuring cups ever,” is how I put it to Pete. “They’re measuring cups,” he said, skeptically. “No, use them,” I insisted.

They’re so great because you can measure from above. There are marks on the side, but also on the inside so when you’re pouring liquids, you can look down and measure. No pouring, then looking from the side, then pouring, then holding it up eye level. It just made it so much easier. 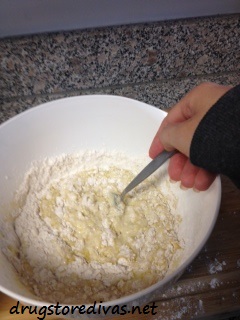 Mix the ingredients until a dough forms. Personally, I mixed them in a 2-quart batter bowl. 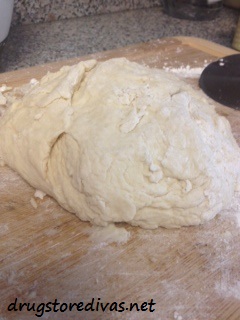 Generously flour a flat surface and roll the dough into a ball. 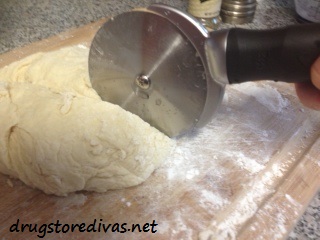 Using a pizza cutter, cut the dough into half. 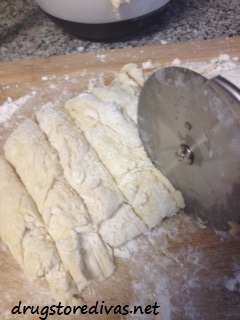 Then, cut it into tenths. Roll the dough slices into balls (this is where I tried to tie them into knots but quit before frustration got the better of me). 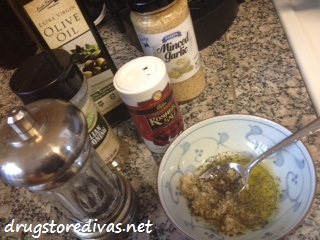 Now you need to make the topping. 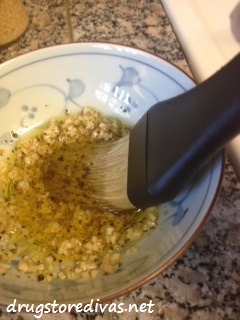 Combine (to taste), olive oil, Italian seasoning, pepper, salt, and minced garlic (Pete said he would have used garlic powder, but he wasn’t home and we didn’t have any). Mix them all. 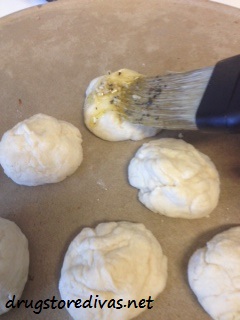 Generously coat the dough balls with the topping. I used a natural pastry brush to do this, and it was a huge help. It was so easy to use it. Last time I needed something like this, I didn’t have one. So I scooped an egg wash with a spoon and poured it on a brioche and spread it with my fingers. Using this brush, what a difference. It was so much better. 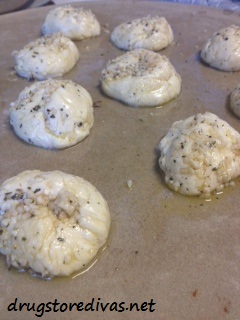 Baked on a pizza stone at 450-degrees for 21 minutes. Yes, the garlic got blackened, but I like it that way. Pete keeps calling the garlic chocolate chips, but it’s garlic.

To make these exactly like Red Lobster’s Cheddar Bay Biscuits, add a half cup of shredded cheddar. I actually had a block of cheddar in the fridge, but was originally planning on making these as garlic knots, so that’s why I didn’t use it.

Batter bowls cos I love baking.

I would use the "Measure From Above" 3 Piece Liquid Measuring Cup Set most often. Thanks for the giveaway.

I love "renditions", I nailed the shrimp scampi. It's time for the biscuits.

I really would like to have the bowls. Mine are in a sad state. new ones would be nice.