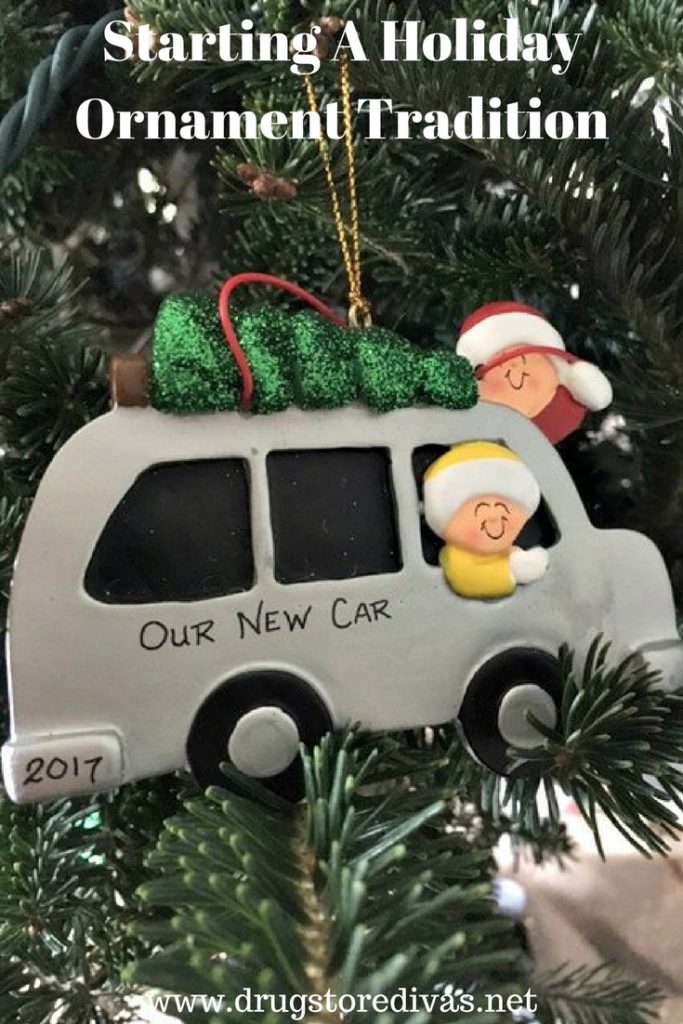 The first year I moved out on my own, I wanted a Christmas tree. But I was living in a second floor apartment, and I had no idea how to bring a tree up a flight of stairs. Never mind that I had no idea how to get a tree or get it back to my apartment. My friend had bought me a small tree (which was probably not for indoor living) when I moved five months before, so I decorated that.

When I showed people photos of that tree, they told me it was dead, so at some point, I got rid of it.

The next year, I bought a fake tree and that’s the same tree Pete and I used when we lived in our apartment. Now that we have a house, we went out this weekend and got our first real tree.

We put the ornaments on it earlier this week, and it was the first time that I hung the ornaments my mom got me onto my own tree. See, every year growing up, one of my mom’s Christmas traditions was to  purchase me and my brothers one ornament. I have one with a typewriter, which was from the first year I worked at a newspaper. One is of a bear playing a violin since I played for ten years. Each ornament is a trip down memory lane.

The year after Pete and I started dating, I started getting us an ornament a year. The first year was a suitcase with our vacations from that year written on it. The next was North Carolina since we had just moved. We got another the year we were married.

Now that I’m rereading this, I’m realizing we skipped 2013. Must have been a boring year. 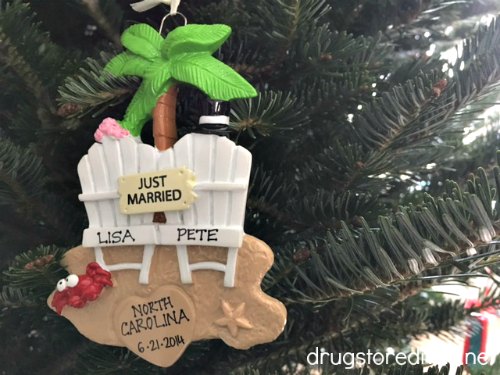 This year, our ornament is us in a silver car. Getting a new silver car was the biggest thing we did this year. We actually ended up getting a new (for us) car this year after ours was totaled when we were hit from behind on the way to visit Pete’s dad in Washington, DC for his 70th birthday.

But, by a stroke of a miracle, we made it back to North Carolina a few days later (which shocked the tow truck driver who eventually towed our car). My dad ended up lending us his car for four months until we eventually bought the new (for us) one.

So yes, this was by far the biggest part of our 2017. It’s a strange thing to immortalize on our tree if you think it’s about the accident and the new car. But it’s more about how we got to that point, how we were celebrating Pete’s dad and didn’t let it get us down, and how my dad was there for us when we needed it. That’s a great set of memories to remember forever.

And then that tree brought home our very first real tree.

This year, we got our first real Christmas tree. It was so sad taking it down over the weekend, but I saved part of it to turn it into a DIY Our First Tree Ornament. It seems like a perfect first married Christmas DIY. Get the tutorial on the latest post on www.abrideonabudget.com (clickable link in profile).

Some years feel like they pass with nothing happening (you know, like our 2013). But you should be able to pick one moment out that represents your year as a whole or just one moment that was fun that year.

When you look back on them, you’ll absolutely love the time traveling.

The first year of our grandchild was the highlight of 2017 for us.

My favorite memory is the bonfires this pat summer.

My daughter had her first ballet recital - I might pick the Ballerina ornament!

The Birth of my nephew- I would get the new baby ornament!!!

My favorite moment from 2017 was when I realized that I was going to make it through the year itself. I had two major back surgeries within 7 months with lots of complications. Home bound for a year so I am definitely looking forward to 2018.