Zoes Kitchen provided items and a gift card for this review. All thoughts and opinions belong to Drugstore Divas.

When we host parties, we usually cook. But this time of year, we just don’t have the time. Pete and I are both working 14 hour days and my parents and grandma just moved in down the block. Any free time we have, we spend with them.

So we wanted to throw them a welcome to the neighborhood party last Sunday … but after spending the majority of Sunday helping them move their furniture and boxes out of the PODS in their new driveway, we didn’t have time to cook a feast for the party. Enter Zoes Kitchen. I called the Mediterranean restaurant on Saturday night to see if I could pick up a catering order on Sunday afternoon.

The associate who answered the phone said it wasn’t a problem. He took my order (which was super easy since I was ordering a pre-made package, although you can order a la carte) and said it would be ready for pick up the next day. 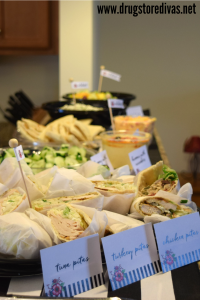 It was ready exactly when it should be … all three huge bags of food. There was no way I was going to be able to carry it all to my car, but I was going to attempt to try. Except I didn’t have to. Another associate helped me carry the bags to the car (thank goodness because it would have been impossible alone).

When I started setting up for the party, I set out a black and white table runner that matched these cute food tags that I had been sent (they did not come with the catering package I picked up from Zoes). We set up napkins and plates on one end, followed by the food: chicken, tuna, and turkey pitas; assorted fruit; hummus; pimento cheese; pita bread; cucumbers; orzo “tabouli”; and a gallon of limeade (which, it was noted, goes great with tequila). 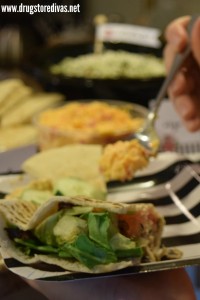 We actually did set up a margarita station with the limeade, tequila, and salted-rim glasses. The margaritas were a hit. The limeade was too. Funny aside: my grandma had never, in her 94 years of life ever had limeade. My dad was trying to explain what it was, but she wasn’t getting it. So, finally, I said it was lemonade but made from limes and she was good to go.

Everyone went back for seconds. Part of it was because the plates we used were a bit too tiny to hold everything and part of it was because everything was so good. The food was really fresh and had a ton of flavor, while almost completely lacking condiments. None of the pitas had any mayo on them, which we all noticed. The chicken was seasoned so well and the tuna was made with olives and capers, so we didn’t miss it there. The turkey, however, could have benefited from something because it was really plain. I ended up scooping a bit of the pimento cheese inside and it was delicious. 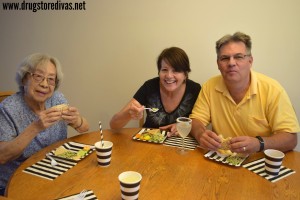 That pimento cheese was my favorite out of everything. I thought I would really like the orzo tabouli. In fact, I was looking forward to that most of all, but it fell a little flat for me. I added a sprinkle of salt and that helped, but I wasn’t crazy about it. Pete really liked it though, especially the fresh herb on top, so it depends on your taste buds.

Everyone loved the hummus. It was definitely a crowd pleaser. We make hummus at home, but we never put in tahini (mostly because we just don’t ever have it in the cabinet). This hummus had it and what a difference it makes. Plus, it was so smooth. Ours is usually a little thicker, but this was thin, smooth, and delicious. 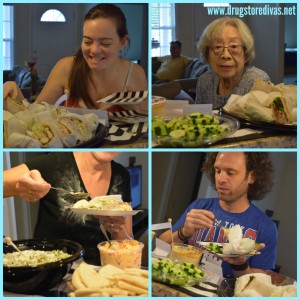 This is meant to feed 8 to 10 people and it definitely will. You might even be able to feed 12, if there are kids. It comes with a total of 20 pita sandwiches so that’s where the 10 comes from. But there was so much of the other items that you really could get away with eating one pita and filling your plate with the other delicious items on the menu.

The only thing I added myself was a cookie. It was just over $2 for a cookie, which sounds like a lot … but consider this: five people shared it. Yup, I cut the three-chocolate chocolate chip cookie into five equal pieces and everyone had a taste. That delicious two-bite morsel was such a satisfying end to a great meal.

Zoes Kitchen has other catering packages, including the Game Day Goodies. That pack comes with kabobs and a potato salad that looks amazing. I might have to host the Super Bowl party this year, just so I have an excuse to order that catering package.

Which item from our party would you have liked to try? 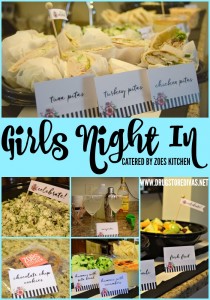 I don't think I could pick just one to try! Love the idea of catering cooking with people over can be a pain.

Sounds like lots of fun! What a wonderful idea.

I LOVE Zoe's! I eat there with 2 close friends at least every other week, sometimes more than that! I have lots of favorites. :)

I love the idea of catering for a girls night! The food looks delicious!