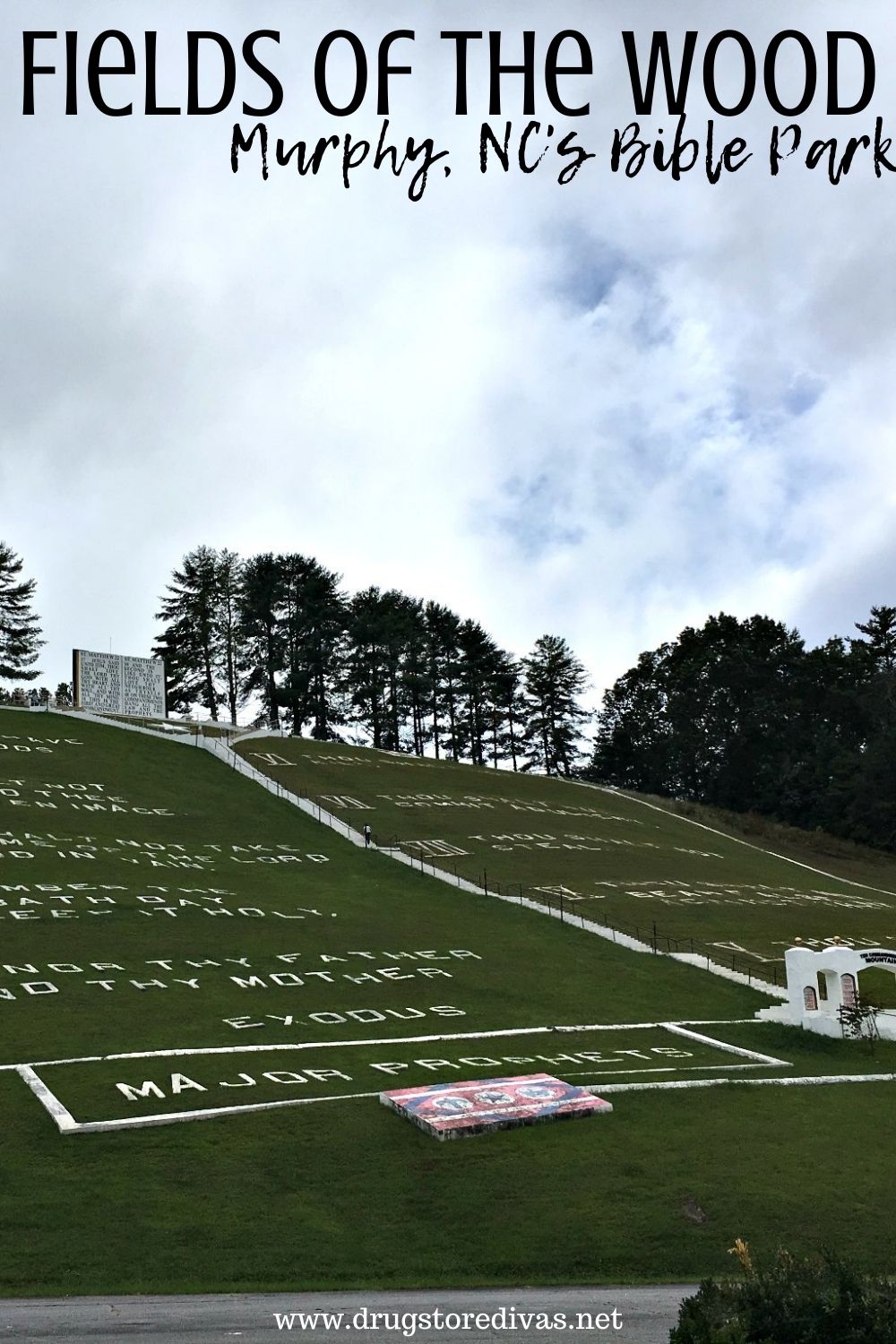 When we were planning our trip to Murphy, North Carolina, we were trying to plan things to do. I really wanted to find things that were outdoors because the weather is still nice and indoors still feels a little weird right now. So when I found Fields Of The Wood, Murphy, NC’s Bible Park, it fit all our criteria.

It was something to do in Murphy. It was outdoors.

And, not that I was looking for something free, but I always like to find free things to do when I’m on vacation. Free attractions are a way to stretch your vacation budget.

So we were happy that Fields Of The Wood was free.

We put it on our list, and we really enjoyed it.

I’ll start this out by saying the easiest way for me to define Fields Of The Woods (10000 NC-294) is it’s a Bible park. “Religious park” what Wikipedia calls it.

So if you’re not into that, Fields Of The Wood might not be right for you.

And you know, even if you’re not into the Bible, you might still like this. Fields Of The Wood is completely self-guided, so there’s no hidden pastor that’s going to jump out behind you and try to baptize you. There’s no nun carrying around a cross and no eucharistic minister trying to serve you the body and blood of Christ.

It’s just an outdoor park that has the world’s largest ten commandments. And that’s just something cool to say you saw.

Who started Fields Of The Wood?

Fields Of The Wood was started by A.J. Tomlinson, a Quaker who later became a general overseer of the Church of God. When he was impeached, he and his followers began the Church of God of Prophecy.

It was during his time as head of the Church of God of Prophecy that he started Fields Of The Wood. He had gone there to pray and had a revelation from God that encouraged him to build the site. He started it shortly before his death in 1943. The park was completed under his son’s direction.

How is the drive to Fields Of The Wood?

Fields Of The Wood is nestled away in the Appalachian Mountains, basically as close to the North Carolina/Tennessee border as you can get without crossing it.

Fields Of The Wood is only a 25 minute drive from downtown Murphy, but it’s through twisty and windy mountain roads. 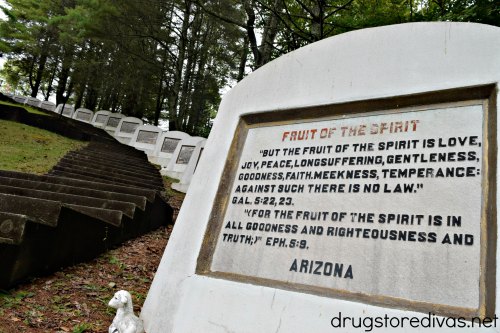 Prayer Mountain is filled with 29 biblical teachings on three foot by four foot marble tablets on the right. On the left side, there are four markers depicting the formation of the Church of God of Prophecy.

Here’s the thing, though. I misheard the woman in the gift shop when she gave us directions on how to view Prayer Mountain. I thought she told us to walk up the side, then walk down the stairs. So we walked up a hill, through the mountainside, and landed at the “Prayed and Prevailed” display, where many visitors left prayers. We then walked down the 300-plus stairs of Prayer Mountain, stopping to read the tablets. 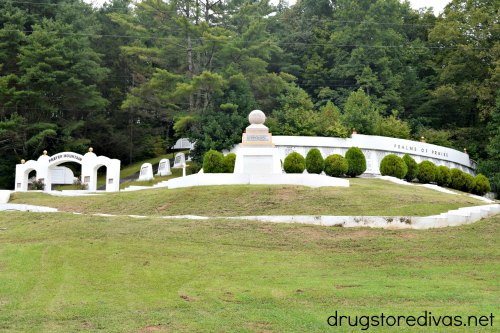 At the start of Prayer Mountain (or, well, the bottom for us), there’s a rotunda called the Psalms of Praise, filled with psalms that are important to the Church of God of Prophecy.

I walked around it a little bit, looking for my favorite psalm. I couldn’t find it, and then remembered my favorite scripture is a proverb, not a psalm, so it wouldn’t be on there.

I went down to the bottom of the mountain, skipping the White Angel Fleet airplane, which was used for missionary trips, that was located on the opposite side of the Psalms of Praise.

At the bottom of Prayer Mountain is the 29-foot long baptismal bool. When we were there, it wasn’t in use, but I actually do think baptisms are still held here.

When I was there, I was greeted by the cutest kitten (I instagrammed that moment here). So, if you go to Fields Of The Wind, look for my cat friend. It was so friendly and let me pet it for a long time, then followed me to another section of the park. 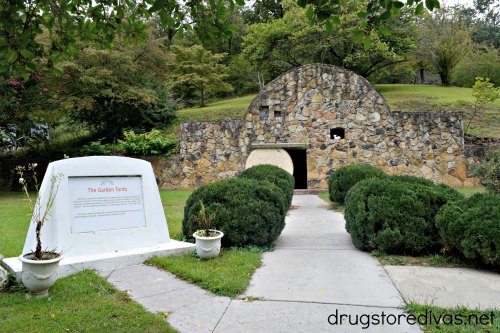 When my mom saw the Garden Tomb at Fields Of The Wind, she was shocked. She had never seen the miniseries, so the only image she had of the tomb where Jesus was laid was based on an image she created from Bible stories. It didn’t look anything like the actual tomb.

The Garden Tomb is actually where the cat followed me too. The tomb is open, so I looked inside, but it did make me nervous. There’s no way the rock in front of the tomb could slide to lock anyone inside, but I didn’t want to stay in there too long to risk it. 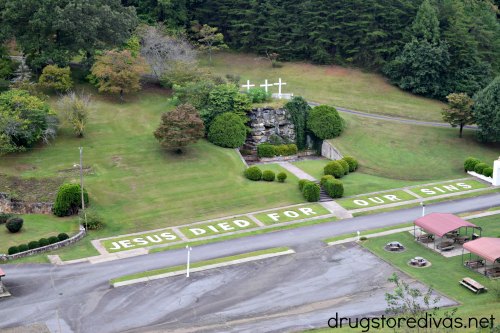 Golgotha Hill is a replica of where Jesus was crucified along with two thieves. In front of it are the words “Jesus Died For Our Sins,” which Pete got an amazing shot of from the top of Ten Commandment Mountain. 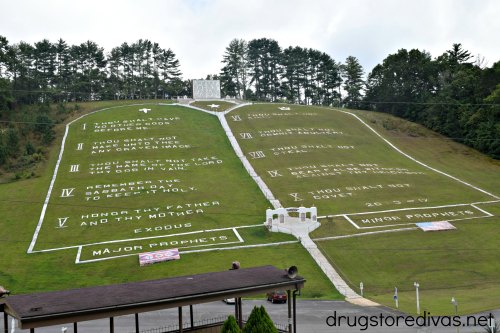 Pete actually walked up the 300-plus stairs to the top of Ten Commandment Mountain. I watched him from the bottom. After the trek up Prayer Mountain Drive, then down Prayer Mountain, my legs were tired. But it was Pete’s pilgrimage to climb the steps himself.

At the top, you’re greeted with a scripture from Matthew and a view of western North Carolina, eastern Tennessee, and northern Georgia.

If you continue up past the peak of Ten Commandment Mountain, you can walk to the All Nations Cross. If you’re like me and your legs are tired, you can actually drive up there too.

We weren’t sure what to expect from All Nations Cross. It was flags of every nation, arranged in a cross shape. By the time we got there, we were all just so tired, so we just drove around it and I took a photo of my mom at the trailhead by the All Nations Cross (because it’s the old timers trail, and I thought that was funny). 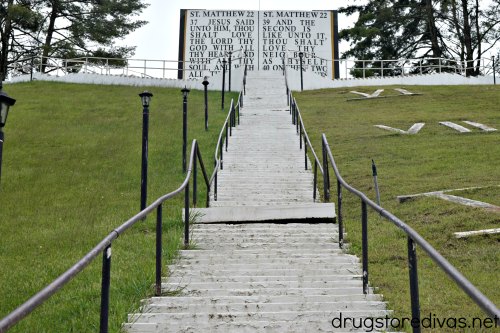 We really enjoyed our time at Fields Of The Wood. We spent quite a bit of time there, outside in the sunshine, and I’m definitely glad we went to check it out. If you’re in Murphy, NC, it worth a drive.